Trending Now
You are at:Home»Featured»Rome in Lent: Like a Mist
By Dr. Robert Moynihan on February 29, 2012 Featured, Live in Christ, The Social Order 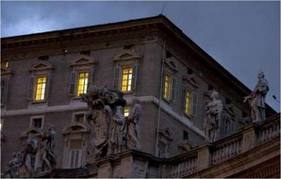 A quiet time in Rome, the end of February. A time of silence.

This evening in a completely empty and silent Vatican, I had the rare experience of running into a little child inside the city.

He was walking with his father near the back of the basilica. The child’s mother, a member of the basilica choir, was at choir practice, and the father and the little boy, whose name is Giuseppe, took the opportunity to walk outside. [T]he presence of the father and child [is] like a sign of something we need to understand.

Outside the Vatican walls, Piazza San Pietro itself also was quiet, beneath a luminous crescent moon which hung like an exclamation point over the facade of St. Peter’s, directly above the cupola, a gemstone of shining whiteness against the black February sky.

Above the Square, in the Apostolic Palace, where Pope Benedict lives, the lights in the Pope’s window were on — he is working.

The Vatican is quiet this week because the entire city is engaged in a week-long period of Lenten Spiritual Exercises. Ordinary activity has slowed dramatically, following the bustle of the consistory.

The exercises are being preached by an African cardinal named Laurent Monsengwo Pasinya, 72, a man well known in Rome, and throughout the world, for his courage in the face of political power, and for his thoughtful biblical scholarship. He is a fighter for a “culture of life” in a world that seems ever more bent on embracing a “culture of death.” 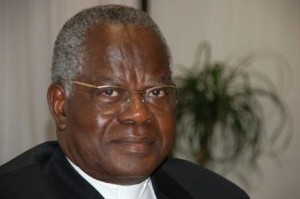 He is man whose face shines with the intensity of his inner integrity, as this photo shows.

Monsengwo is regarded by many as the pre-eminent active African Church leader. He is the first African ever to have received a doctorate in exegesis from the Pontifical Biblical Institute (he studied both in the Biblical Institute in Rome and in Jerusalem).

He is, I was told today by someone who knows him, one of the most fluent of all the Church’s cardinals in Latin; he also is an expert in biblical Greek.

Cardinal Monsengwo is the archbishop of Kinshasa, in the Democratic Republic of the Congo, a country that has been torn by civil war for many years.

I saw Mosengwo briefly, yesterday and today, by chance, and exchanged greetings with him.

He had just come each time from preaching to the Curia, and I was struck by the air of spiritual intensity in his expression, at once fiery, yet also serene, as if he were filled with fire of the Holy Spirit.

He said he did not wish to speak at all about the Exercises he is preaching, but I felt from his appearance, and an acknowledgment that he is tired, that he is drawing upon all of his considerable intellectual and spiritual energy to carry out his task of preaching before the Pope and the Curia.

Monsengwo has vocally defended human rights, both in Congo and the rest of Africa.

He views the human being through the Christian concept of mankind — a concept that is under attack today, as I discuss below.

He once said: “Peace goes hand in hand with justice, justice with right, right with truth… Without truth, it is difficult to ensure justice and to speak of rights… ‘In truth there is peace’ (Benedict XVI)…

“Christ is our peace, He made peace, He proclaimed peace, so that all Jews and pagans could be made one people. Not by leaving each other with their privileges and their rights, but in abolishing exclusion, in pulling down the wall of cultural and social separation, in destroying the hatred which He crucified upon the cross with his body. Jews and Gentiles are no longer foreigners, or strangers, but close friends…

“In this way, He created a new man, to reconcile them both to God and to give them access to the Father through the Spirit. It is in doing away with all these barriers, exclusion, discriminatory laws in faith and society, and especially in killing hatred that one reconciles men and peace is made.” (October 13, 2009, Synod for Africa)
Reading these words, and seeking to understand the precise character of the struggle for the faith today — for truth today, in our “post-Christian” world — I visited a Vatican monsignor and asked him what he thought the key issues are which we face.

And he made the same point Monsengwo once made: that one of the issues is the truth about man. What is man? What is good for man? What is a way of life for man, true life?

The monsignor told me that the Vatican, and Church leaders in general around the world, note with some concern that many governments today are increasingly in agreement on two matters: “gender” and “reproductive health.”

“It is less a fully articulated ideology, or a precise program, than an acquiescence in the use of language in a specific, new sense,” the monsignor said. “At the United Nations, in conferences of international bodies, in scholarly and legal symposia, there is a general consensus, increasingly accepted, that these terms have a meaning that is not a traditional one.”

And what is the new meaning?

“The new meaning is that gender is fluid, there is no longer a ‘male’ and a ‘female’ gender into which humanity is divided, but a series of ‘genders’ which flow into one another, and have differing characteristics, and different needs, socially and legally, which must be recognized and respected.

“And ‘reproductive health’ means the health of a woman in having access to every form of birth control, and control over pregnancies, including abortion, as a fundamental human right.

“The sense is that traditional definitions of gender and the health of women in regard to their fertility, the Church’s traditional understanding of the nature of men and women, and of protecting human life, are primitive, part of the infancy of the race, to be left behind.”

And then the monsignor added: “It seems so strange to me, that this should happen in every part of the world, in every country, not just in the West, where it began, but now in India, in China, in Russia, everywhere.

“It almost seems like a spiritual force which has, quietly but effectively, transformed our understanding of the family, or rather, brought us to consider the traditional family itself as something to be left behind, to be rejected as a negative remnant of the past, in order to bring about a supposed ‘better,’ ‘family-free’ human future.

“In this process, there seems something almost more than human, something supernatural. I think it may in fact be diabolical.

“What is occurring seems aimed at eliminating throughout all nations and cultures the traditional concept of the human family. In this sense, the battle for the faith in our time has a strongly anthropological characteristic. And, sad to say, it seems to be a battle we are losing.

“It is as if there were a mist, a spiritual mist, which has drifted over our minds, and hearts, and caused us to grow drowsy, and to accept these new definitions, and new understandings, without any protest, or outcry, so that we lose things that are very precious to us without even a struggle.”

Do we want this future?

Can we not pass through the “mists,” and come out again into the full sunlight?

Can we awaken from our sleep, and resume the fight for the truth of our faith, handed down to us by the Apostles, and by all the many witnesses to Christ who have gone before us?

This is the issue we face. It is, I think, a choice between two ways, two cultures: a culture of death, of sterile pleasures, without a real future, and a culture of life, of family, of children, like little Giuseppe, with a real future.

So these quiet days of Lent’s beginning in Rome seem an appropriate time for a meditation, in silence, on these questions, on such choices.