Trending Now
You are at:Home»Featured»How Circumstance Dictates Islamic Behavior
By Raymond Ibrahim on January 25, 2012 Featured, Those in Need 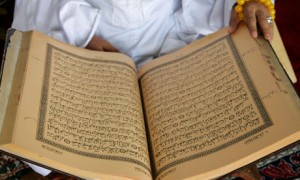 Has there ever been a time when one group of people openly exposes its animosity for another group of people—even as this second group not only ignores the animosity, but speaks well of, enables, and legitimizes the first group?

Welcome to the 21st century, where Western politicians empower those Muslims who are otherwise constantly and openly denouncing all non-Muslims as enemies to be fought and subjugated.

Consider this video of Sheikh Yassir al-Burhami, a top-ranked figure in Egypt’s Salafi movement which won some 25% of the votes in recent elections. He makes clear a point that, in a different era, would be thoroughly eye-opening: that all notions of peace with non-Muslims are based on circumstance. When Muslims are weak, they should be peaceful; when strong, they should go on the offensive.

Discussing “the analogy between Egypt’s Christians and the Jews of Medina,” Burhami pointed out that Muslims may make temporary peace with infidels, when circumstance calls for it:

The Jews of Medina represent a paradigm—laid by the prophet [Muhammad]—that shows how Muslims should deal with infidels. The prophet’s methods of dealing with infidels are available for Muslims to replicate depending on their situation and their capabilities. The Prophet in Mecca dealt with the infidels in a certain way, so whenever Muslims are vulnerable they should deal with the infidels in this same manner.

Burhami is referring to the famous Mecca/Medina division: when Muhammad was weak and outnumbered in his early Mecca period, he preached peace and made pacts with infidels; when he became strong in the Medina period, he preached war and went on the offensive. This dichotomy—preach peace when weak, wage war when strong—has been instructive to Muslims for ages.

In many infidel countries, such as occupied Palestine, we instruct Muslims to do just that [follow Koran 4:77]. Today in Gaza, we do not tell Muslims to launch rockets everyday and so destroy the country, but we tell them “Refrain from action and respect the truce.” When the Prophet first arrived in Medina, he made conciliation with the Jews, conciliation without jizya [i.e., equal-term conciliation without forcing Jews to pay tribute and live as second-class dhimmis]—this is a pattern that can be followed whenever circumstances dictate. However, when they breached the covenant he fought them and ultimately imposed jizya on the People of the Book [Jews and Christians]. Nor is this Sura [Koran 9:29] abrogated; it is acknowledged and agreed upon.

Burhami exposes much here, beginning with the Koran verse he quotes: when weak, Muslims are to “refrain from action”—but “pay your zakat,” which, among other things, funds the jihad. Also, as Muhammad made peace with the Jews of Medina, without making them submit to jizya (tribute to be paid “while utterly subdued”), so too are Palestinians allowed to make temporary peace with Israel. In both cases, circumstance—namely, Muslim weakness—justify it. But, when capability allows, Koran 9:29—which calls for jizya and subjugation, and which Burhami quotes as having abrogated the other peaceful verses—takes over.

Yes we can deal with those Christians [Egypt’s Copts] as the Jews were dealt with in Medina; it is an option. The Prophet made the Hudaybiya Reconciliation with the infidels and held a truce for ten years; that is also an option…. So, it is legitimate to choose from examples set by the Prophet, depending on what suits the situation of Muslims now.

In short, Muslims may be tolerant of Egypt’s Copts now, and not collect jizya and place them in dhimmitude, until they are more capable—just like Palestinians may make peace with Israel now, till they are more capable of waging an offensive. Indeed, Dr. Mohamed Saad Katatni—the secretary general of the Muslim Brotherhood‘s Freedom and Justice Party, which won 40% of the votes—reportedly said that Copts would not pay jizya now, implying that the idea of collecting tribute from subdued “dhimmi” Copts is very much alive among the Brotherhood, only dormant till a more opportune moment.

One may argue that Sheikh Yassir al-Burhami—”one man,” a “radical”—is not representative of “true Islam.” The problem, however, is that all his arguments have been made countless times by countless Muslims, including the most authoritative, throughout the ages. Even the late Yasser Arafat evoked Hudaybiya as representative of “peace” with Israel.

And yet, despite all this—despite the fact that this video is a drop in the bucket of evidence—here is the West, making the way clear for people like Burhami to power in the name of “democracy,” regardless that pacts, smiles, and handshakes over cups of coffee exist solely when circumstance, in this case, Muslim weakness, dictates.