Trending Now
You are at:Home»Featured»The Annual Media Blackout of the March for Life
By John Jalsevac on January 25, 2012 Featured, Life Issues & Bioethics
[tube]http://www.youtube.com/watch?v=-xJgFyXtW00[/tube] 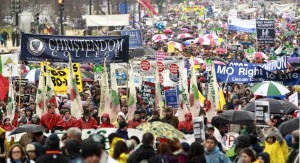 What’s more newsworthy: that several hundred thousand people converged on Capitol Hill in the midst of a cold rain in the middle of January in order to protest abortion, or that a tiny handful of pro-abortion counter protesters showed up as well?

Here’s another question: are attendees at the March for Life primarily young, vibrant, joyful and peaceful, or are they mostly old and filled with wrath?

For anyone who’s been to the March, the answers are obvious. But it seems that wherever a Washington Post reporter goes, reality undergoes the most unexpected changes.

The caption on one of the Post’s photo reads “Freezing rain Monday morning was said to have limited attendance for both groups.” In response to which Media Research Center writer Tim Graham quipped: “Yes, Post readers: the pro-lifers were limited to many thousands, and the abortion advocates were limited to about 11. The ratio could be a thousand to one, and the newspaper treats them like one versus one.”

But I suppose we can at least give the Post credit for covering the event at all. The Media Research Center (MRC) reports that the New York Times completely ignored the event for the fifth year in a row.

Humorously, the Times even ran a “Happenings in Washington” blog post Monday that mentioned that the Boston Bruins were set to be honored by Obama, and that South Korea’s ambassador to the United States would be in town to sign an environmental agreement.

Oh yeah, and there will be hordes of people, most of them young, swarming the city peacefully demanding the end of the slaughter of millions of American babies in the womb. Would that qualify as a “happening” in Washington? Apparently not according to the New York Times.

Clay Waters of MRC points out: “Even the two references made about the march at nytimes.com were accidental, done to explain where Sen. Rand Paul was headed when he was stopped at airport security by TSA in Nashville.”

The mainstream media bias surrounding the annual March for Life is so ubiquitous and so brazen that it has become shrug-worthy, and the butt of jokes. And rightly so: it is so pathetic that it actually is funny.

Probably the most laughable example of this bias at work happened last year, when a CNN anchor actually wondered on air whether there were more pro-life or pro-abortion advocates at the March for Life – despite the fact that conservative estimates place several hundred thousand pro-life protesters in D.C. that day, compared to a few dozen, at most, pro-abortion counter-demonstrators.

“Which side is represented the most Angie, do we know?” CNN anchor Bill Sanchez queried to his producer, as CNN’s camera focused stubbornly on those few dozen pro-abortion counter protesters. “Do we know?” When there was no response, Sanchez went on to promise that CNN would “keep an eye” on the situation and report on the matter “fairly and squarely.”’

Folks: that’s not media “bias.” That’s not a case of accidentally overstating the case, or misinterpreting the facts in favor of one side simply because you happen to be rooting for that side. That’s outright censorship, lying, and deception. No one accidentally mistakes a crowd of three hundred thousand for one of about thirty.

Which is why we simply have to acknowledge that when it comes to social issues, we cannot trust the mainstream media for the straight goods.

Fortunately, however, there is some good news in all this. And the good news is this: that in the past few years there has been a revolution in alternative media, which means that pro-life people no longer have to rely on the mainstream media to get their news on the social issues. News agencies like LifeSiteNews.com, National Right to Life News, EWTN, the Catholic Register, LifeNews.com, Live Action, MRC, CNSNews, Catholic News Agency, Catholic Lane and others reach millions of people every day, and are growing every day.

If we can’t trust the media, then it’s time we take the media back.