Trending Now
You are at:Home»Featured»How Did Our Lord Have Humility?
By M. R. Zapp on May 8, 2014 Featured, Learn & Live the Faith, Live in Christ 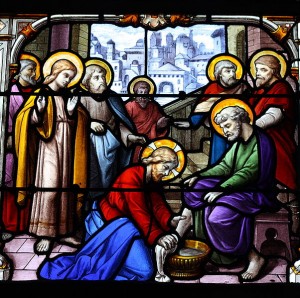 Whenever someone insults us, we usually come tearing back, ready to defend our reputation, our honor, or whatever it was that we perceive was insulted.  We might even grant that on some level we deserved the insult, but not from them.  “Only God can judge me,”we say.

But for as much as this is true, it’s not our right to say so, because humiliations like this are allowed by God, and so, we can say, they come from God.  That’s pretty much the basics of our having humility.

A person could break their brain trying to fathom how it was that Our Lord could have had humility.  We could say His entire life was a cross, from His birth in poverty and being raised in poverty, throughout His public ministry where His reputation was chronically under attack, to, obviously, the Passion.

Even if the trials of His public ministry are justifiably upstaged by His passion, too often we forget how hard it must have been to endure those three year’s worth of constant humiliation.

If we remember that He was Perfection itself, more innocent as a 33 year old man, than a newborn baby born in Original Sin, His self-willed humility becomes a mystery.  All His love is directed towards the Father, but as the mystery of the Trinity shows us, God is one, so this love was also directed towards Himself.

Now, my self-love is unjustified, but His self-love, infinite and limitless, was and is entirely justified.  His dignity as the Divinity was so immense, and yet, He suffered to undergo the petty, trite, banal, and idiotic insults of a people (meaning all of us even today) that were concerned with the paltry and worthless things of this life.

How did Our Lord have Humility?  How did He not just blast us into oblivion?

When I try to have humility in the face of insults, I have to throw up to myself all the reasons why that humility is necessary, that on some level the humiliations are justified because of my sins and because of my nature as a created being, that I am not to compare myself to man, but to God and will thus find myself wanting.

But for Our Lord there was no justification, no comparison.

On the one hand He had the Perfection of His Divine Nature, the knowledge of His Messianic dignity and on the other, He had the ability, we could say the weakness, of feeling the pain of insults through His human nature.  And as His sinless human nature was the most exalted human nature possible, I can only imagine that the sensitivity of His nature, the depths of His feeling, were equally heightened in degree, even if it was tempered by an exalted intellect and will.

Obviously, He had humility because He willed it, as satisfaction to the Father for sin, but as true as that explanation is, it can seem a sterile one.

Does it express the utter command that Christ’s Will had over His emotions?  Does it portray the pain He humanly felt, the outrage, and yet, the sadness that it is possible to imagine His Divinity might have felt?  And in light of that consideration should we not be moved by the fact of His weeping over Jerusalem, a time when He allowed Himself to show how the knowledge of their future affected Him?  God wept over humanity, a humanity which gave him three years worth of insults.

How long does it take for us to write someone off for having insulted us?  The first time?  The second time?  Do we make it to the fourth time?  How many insults did He suffer outside His Passion?  Was this why the child-like trust and faith of St. John garnered His friendship to the degree that it did?

We are called to be Christ-like, and can use the crutches of justice – what is owed to us for the sins we have committed – in order to accept humiliations and have humility, but Our Lord was sinless.  He owed nothing.

That He had humility is an undeniable fact. How he had humility is a mystery.  Was His humility solely in the light of His Father’s Majesty? Contrary to such a hypothesis, we know They, the Father and the Son, are equal in majesty.

In essence, the answer to the question of how Our Lord had humility is wrapped up in the mystery of the relationship between the three Persons of the Trinity, the purpose for which He came, and His love for His Father.  God’s mercy toward us, by which He accepted countless trespasses against His Divine dignity, which gratuitously sent us Our Lord, and without which we could not have had the hope of heaven, must be the wellspring of this humility.

Yet, from a human point of view, from my point of view, being a weak, sinful creature, how Our Lord had humility is a thought too big for me to wrap my mind around.  But it makes for a wonderful meditation.