Trending Now
You are at:Home»Uncategorized»Endless Possibility, Perpetual Discontent
By Erica Wanis on May 8, 2014 Uncategorized 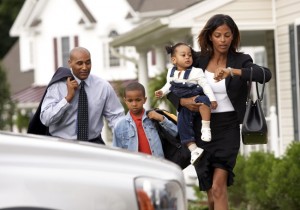 My mother and stepfather were recently privy to a conversation between myself and a good female friend. Both of us are first time mothers navigating the trials and tribulations of our sons’ first years. Stealing a few minutes to enjoy some coffee and dessert while our husbands minded the boys in the next room, I asked my friend how she was enjoying motherhood. “Is it everything you thought it would be?” I asked.

Hours later as Mom and I were cleaning the kitchen, she explained how odd my conversation with my friend had seemed to her and my stepdad. “It’s just funny how much things have changed. The questions you ask yourselves as parents, the things you agonize over, we never even thought to ask ourselves those questions, we just did it. Your generation analyzes everything… it must drive you crazy!”

My mom’s words got me thinking. I know it’s human nature to idealize the past, but I couldn’t shake the feeling that perhaps she was hitting on something important. Among the firstborn of the infamous Millennial Generation, my friend and I have reaped all the benefits that being a woman in 21st century America affords. We’re both college-educated, both married to successful professional men who embrace a fairly egalitarian conception of marriage and parenthood, and both accomplished in our respective professional pursuits. We’re also both constantly struggling against feelings of frustration and inadequacy. We grew up in a culture that told us we could have it all and do it all, and we’re doing our best to realize that promise, but somehow it seems always just out of reach, life ever-so-slightly out of balance.

I have other friends who I know are experiencing their own version of this frustration. The workaholic Hill staffer and the first year law associate who set alarms on their cell phones so as to not miss a day of birth control. For them the pursuit of professional success means that motherhood must wait, even if that means they will be older than they would ideally like when they finally do start a family and even if that means having to manage their husband’s or family’s frustration at their choice to delay pregnancy.

The common denominator here is that despite our apparent strides in the last fifty years, women today seem plagued with feelings of perpetual angst. Which leads back to my mother’s observation and the question it begs: For the liberated woman of today, has endless possibility bred perpetual discontent?

The world has experienced many dramatic changes in the past 30 years that have impacted men and women alike. Many of these changes have undoubtedly been for the better, especially when one considers the great strides made in civil rights for minority groups and women. Less than 55 years after Rosa Parks’ landmark refusal to surrender her seat on a public bus, America elected its first black president. The last U.S. Secretary of State was female, as were two of her predecessors. There is no question that Americans in the 21st century are the fortunate benefactors of civil rights battles fought over the last century. But just as every dark cloud has a silver lining; it seems the converse may also be true.

It’s not surprising that many women today feel overwhelmed by life’s multifarious demands. Liberated from the narrow confines of hearth and home, the world is our virtual oyster. But where to start?  There’s college of course, that’s a given. But what next? What if you fall in love as an undergrad, as I and many of my friends did? How will that affect post-graduate study plans or career prospects? What about children? Do you start a family early or wait until you’ve established your career and reached a point of economic security? What if you don’t marry out of college?

Well, there’s always the Carrie Bradshaw model (immortalized by the iconic Sex and the City): Live life to the fullest in your 20s and 30s. Express your individuality. Celebrate your independence. Experiment with different kinds of relationships; explore your sexuality. Break some hearts; suffer heartbreak. Cultivate “wisdom.” Then, when you feel you’ve accrued sufficient life experience and the stars are properly aligned, get married and, if your ovaries are still functioning, start a family. Or, if marriage isn’t for you, just find a reputable clinic and the perfect donor and embark on the adventure of motherhood solo. Or adopt, or maybe don’t have kids and just be the favorite aunt for all your siblings’ kids.

Regardless of which path, or combination thereof, a woman finds herself on in life, there’s a good chance she’s going to feel she’s missing out in some way. Stay at home moms with college degrees often feel they are wasting their education and talent. Women juggling the demands of marriage, motherhood and career can easily become embittered and envious of those with fewer demands on their time and attention.

Single mothers, whether by choice or by circumstance, must fulfill the role of mom and dad, breadwinner and homemaker, and hardly have time to pursue their own dreams or goals in life. Women who choose to forgo the traditional route of marriage and kids wonder if they made the wrong choice.

Is it possible, then, that women today might have more reasons to feel unhappy simply because we have more options?

There is another reason many women today might feel a sense of discontent or unhappiness with life, regardless of their circumstances. A quick browse through any one of a dozen women’s magazines or blogs reveals why. Most popular women’s forums, not surprisingly, are animated and driven by an unapologetic feminist viewpoint and agenda. In addition to reinforcing the idea that today’s woman can and should have it all, these platforms often highlight the ways in which we’ve yet to achieve true equality.

That glass ceiling? Cracked, perhaps, but by no means broken. The sex wars? Women are still victims of a machismo culture that wants its women to look and act like Playboy centerfolds. Political power? Women have made political gains but are still vastly underrepresented given that we compose over 50% of the population.

The basic message coming across is that the battle of the sexes is still being fought and that the war is far from over. As with other ideological movements based upon the concept of struggle against a monolithic foe, a mentality easily develops whereby those inside the movement become so defined by the struggle that acknowledging progress actually undermines the cause. Harvey Mansfield suggests in his book Manliness that a nihilistic impulse has developed within the feminist movement, an impulse born of bitterness and animosity towards an existence colored in so many ways by the inherent differences (and inequalities) between men and women.

Differences between the sexes that were at one time considered inherent, natural, and good are now classified as evidence of gender discrimination – sexist disparities that must be eliminated. How, then, are women supposed to feel happy when they are constantly hearing from other women that there’s little to feel happy about? We’re still a persecuted minority after all, and until we eliminate every distinction, every “inequality” that exists between us and men, we have an obligation to stay angry.

Many women do find great fulfillment, and great empowerment, in the domestic life. One could say these women are, for one reason or another, receptive to an innate sense that in dedicating their lives to the family they are doing what Creation intended them to do.

But modern attitudes, particularly those of many females, make it difficult for women to rest easy in their decision to confine themselves to the domestic sphere exclusively. Thus, even women who feel happy and fulfilled by traditional womanly duties and expectations are encouraged to question these feelings, since everywhere they are bombarded with messages that a) their sense of contentment is just a psychological coping mechanism, or b) their role as a housewife isn’t a sufficient contribution to the household and they should join the ranks of working mothers (feminism’s true martyrs).

It is wonderful that women today have the freedom to pursue a variety of options in life. This is a hard-won achievement that should be celebrated and protected. But such a radical shift in the social dynamic of Western society has implications, both for good and for ill, which cannot be ignored.

The challenges we face in today’s world are unavoidable side-effects of our political, social, and professional advances, and despite what many feminists insist, there is no social program or policy solution that can eradicate them, and men are not to blame. Our angst is of a purely existential kind