Trending Now
You are at:Home»Featured»How Sinner-Turned-Saint Augustine Can Teach You Temperance
By Karee Santos on October 28, 2014 Featured, Marriage, On Books 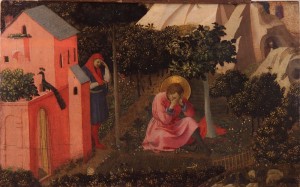 Prior to his conversion, St. Augustine led a pretty debauched life, shacking up with a mistress for 15 years and fathering an illegitimate child with her. As a result I was initially surprised when Jean Heimann’s new book Seven Saints for Seven Virtues chose St. Augustine as a role model for temperance, “the cardinal virtue that helps us overcome weaknesses of the flesh,” as Jean put it.

Can a man who once famously prayed “give me chastity but not yet” really teach anyone how to live a life of temperance?

Then I remembered wise words of advice from my former voice teacher: “The best teacher is someone who shares your flaws, but has overcome them.” Without a doubt, St. Augustine fought fierce battles with a temptation to intemperance, describing himself at one point as a “slave to lust.” Sometimes he won the battle, and sometimes he lost. As Jean notes:

Although he desired to break away from his sexual addiction, it was difficult for him to do so. He was very attached to his sins, as we all are, even though he desired to be celibate. He gradually overcame this sin through prayer, Scripture reading, the graces of the sacraments, and his own willpower and strong determination, based on his strong love for Jesus Christ.

This classic recipe of success in the spiritual life is an excellent guide for us all to follow in developing temperance (or any other virtue).

Seven Saints for Seven Virtues particularly recommends St. Augustine as a role model for cohabiting couples who feel that marriage is unnecessary, pointless, or even constricting. St. Augustine cohabited with his mistress for 15 years, never marrying her and never attaining true happiness. His heart ached when she left him, but he didn’t hesitate to move on to someone else afterward.

The book explains, “Couples who cohabitate are involved in a charade. They are pretending to be committed when neither one of them has made a true commitment.” True love, on the other hand, remains unsatisfied by anything less than a total and definitive self-surrender either to God in celibacy or to each other in Holy Matrimony. This lesson, which St. Augustine lived and learned, has great impact for us today.

The other chapters of Jean’s book similarly highlight one saint whose example can teach us one virtue — Mother Teresa of Calcutta for charity, St. Joseph for humility, and so on. Each chapter also profiles a modern role model of virtue, bringing home to us the truth that people today share the same struggles as saints throughout the ages and with God’s help we are equally capable of choosing truth, goodness, and beauty.

The pursuit of virtue and the imitation of the saints, far from being dry and dull, launches us on “the adventure of a lifetime,” as prolific author and CatholicMom founder Lisa Hendey reminds us in the book’s foreword. Seven Saints and Seven Virtues provides an excellent road map for the quest.