Trending Now
You are at:Home»Featured»Worst-hit Nigerian Diocese is Reeling from Boko Haram Attacks
By ACN-USA News on October 28, 2014 Featured, International Issues, Those in Need 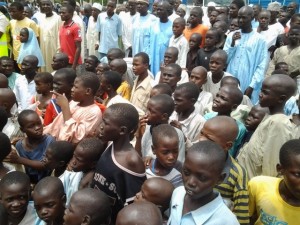 ACN photo: IDPs cared for by the Diocese of Maiduguri

“People are dying every day and in most cases with no one to give them a decent burial–they are left to rot; their homes and properties looted.”

Since 2009 and the start of Boko Haram’s reign of terror in Nigeria, the Diocese of Maiduguri has been the worst hit by attacks from the extremist Islamic group. The diocese covers most of the territory comprised by the Nigerian states of Borno, Yobe and Adamawa, which has been at the center of Boko Haram activities.

In the past five years, many of the local Catholic community’s churches, rectories, schools, hospitals, shops, ordinary homes and businesses have been damaged or destroyed. More than 80,000 Catholics have fled their ancestral villages.

Thus far—though it is not openly reported by most of the country’s media—the Nigerian armed forces have failed to protect the civilian population. In the face of Boko Haram’s technical superiority and resilience, soldiers have fled, while urging civilians to do the same. A recent cease-fire agreement between the government and Boko Haram proved very short-lived, with reports of Boko Haram attacks and kidnappings in Adamawa.

As a consequence of Boko Haram’s almost unchallenged takeover of many towns and villages in north-eastern Nigeria, there are thousands Internally Displaced People (IDPs) living in caves or in the forest. A number of IDPs have been taken in by friends and relatives in Maiduguri, Mubi and Yola. Thousands were able to escape to Cameroon, where, however, they are facing very difficult conditions because of lack of food, shelter and medication.

The IDPs and refugees are in urgent need of water, food, clothes, shelter and medical care, Bishop Oliver Doeme of Maiduguri told international Catholic charity Aid to the Church in an Oct. 25 interview. “Given the political situation in the country, the funds earmarked for the victims of terrorism very seldom reach the actual people on the ground. The Church has been making efforts to offer as much help as possible. The diocese of Maiduguri has given some relief materials to over 1,500 IDPs and it has joined hands with the Yola Diocese to assist those who have taken refuge there,” the bishop said.

He added that, “in the spirit of ecumenism, we have even assisted refugees in Maiduguri who are mostly Christians from other denominations.” However, the prelate made it clear that the local Catholic Church’s ability to respond is being taxed to the breaking point: “We are in dire need of external assistance to help alleviate the difficult situation of the refugees, especially of the children who, out of school and vulnerable to diseases, face an uncertain future.”

Bishop Doeme said that “people are dying every day and in most cases with no one to give them a decent burial—they are left to rot; their homes and properties looted.” The bishop added that people “have become slaves and prisoners in their own homeland. Here is a government that cannot safeguard the lives of its citizens. Life has become so cheap that it can be wasted any moment. We use to think that salt is the cheapest commodity in the market place—life is cheaper now, especially in the northeastern part of Nigeria.”

The bishop stressed that both Muslims and Christians have been affected by Boko Haram’s unrelenting campaign of terror. But he added that there is “still a religious undertone to this whole mess. We might shy away from it and we may be silent, unable to speak up—at least for now—against this push to Islamicize the northeast and eventually all of Nigeria. But what we are witnessing in Adamawa is a clear confirmation of the pursuit of this agenda.”

He continued: “many young people were forcefully taken and conscripted into Boko Haram and are currently receiving training in the captured [military base]in Limankara. Women who could not escape were forced to convert to Islam and married out to the terrorists; some of the elderly who cannot escape are being killed—some are left to die from hunger and starvation. This is the fate of every single town or village that has fallen into their hands. Killings, destruction, looting, forced marriage, forced recruitment or conscription, forced conversion to Islam and the mounting of their flags and declaration of Sharia law or the Caliphate.”

The bishop is gravely concerned about the future, as it is utterly unclear when “Boko Harama will be flushed out of these areas so that our people can come back home. It is our prayer that it happens soon. But no one knows when it will happen.”