Trending Now
You are at:Home»Columnists»How the West was Really Won
By Louie Verrecchio on December 12, 2012 Columnists, Featured, History, MyChurchParish.com, On TV and Movies 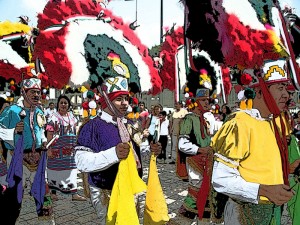 On December 9, 1531, a poor and humble man from a remote village, some fourteen miles outside of present-day Mexico City, had a miraculous encounter with a mysterious lady and the Americas would never be the same.

That peasant was Juan Diego, and the mysterious lady that he encountered was none other than she whom we now know as Our Lady of Guadalupe.

It was just before dawn on that fateful Saturday morning, when Juan, a convert who was received into the Catholic Church less than ten years before, set off on foot for the lengthy trek to a place called Tenochtitlan where, each weekend, he would participate in Holy Mass and religious instruction.

As he approached a point along the way known as Tepeyac Hill, he heard what sounded like the song of many birds, and when the birdsong stopped, it seemed to Juan as though the hill was answering. For a time, he wondered if he were only dreaming or even if perhaps he had somehow entered the kingdom of heaven itself!

This familiar and typically unremarkable hill, which had long been covered with little more than stones and thistles and thorny shrubs, was entirely transformed into a garden of paradise, adorned with jade and turquoise and beautiful flowers that shimmered in the glow of a mysterious golden light.

Juan heard a woman calling his name from atop the hill, and looking up in the direction of the rising sun he saw before his eyes a lady of indescribable beauty. Her garments, as brilliant as the whitest light, appeared to be sending out rays that illuminated everything in her presence. Whatever fear Juan may have been feeling up to that point was dissipated in an instant; happiness filled his heart as he stood in the warmth of the lady’s radiant splendor.

Beckoning him to come closer, the lady announced herself as “the perfect ever Virgin Holy Mary, Mother of the true God,” and she entrusted to Juan a great responsibility; to inform the local ordinary, Bishop Juan de Zumárraga, of her desire for a temple to be built on that very spot.

“I want you to build me a little sacred house,” she said, “a temple where I can offer all of my love, so that it might be seen.”

Juan made haste to deliver the lady’s request. Intrigued but unconvinced, Bishop Zumárraga gently dismissed him.

Greatly disappointed, Juan immediately returned to Tepeyac to beg the Blessed Lady to choose someone else to do her bidding, someone of high stature who might more effectively implore the bishop to carry out her request.

“Understand that I have many to whom I must entrust the delivery of my message and the fulfillment of my will,” the Blessed Virgin replied, “but it is you in particular who must plead my cause.”

After Mass the following day, Juan  —  who is often referred to as Our Lady’s “messenger eagle” and whose native name literally means, “the eagle who speaks” — once again sought to speak with the bishop. His attendants, however, concerned that he might be a bother, would not allow it.

Undeterred, Juan persisted, and after a great deal of effort he was granted another meeting.

Dropping to his knees, Juan tearfully implored Bishop Zumárraga once more, and this time, the bishop listened more intently. He asked many questions of Juan, but eventually concluded that a sign was necessary in order to substantiate the source of the request, so that it may be granted.

Juan passed on the bishop’s request to Our Blessed Lady.

“Climb, my youngest child, to the top of the hill; there where you saw me and I gave my commands,” she graciously responded. “You will find various flowers. Cut them, assemble them and gather them together. Immediately climb down and bring them to me.”

Gathering the flowers in his cloak — a garment typical of peasants, called a tilma, and made of woven cactus fibers — Juan rushed off to show the bishop.

Once again the bishop’s attendants resisted. After detaining him for many hours, however, they forced open his cloak and were amazed at the sight and the fragrance of the roses therein. Immediately, they led him to Bishop Zumárraga.

Once again dropping to his knees, Juan dutifully informed the bishop of all that had taken place.

Opening the tilma, the flowers fell to the floor, and at that very moment the image of the Blessed Virgin Mary, with rays of light emanating from her presence just as when Juan had seen her on Tepeyac Hill, miraculously appeared on the fabric of the cloak.

No further sign was necessary. The temple that Our Lady requested so that she may offer “all of her love,” the Lord Jesus Christ, was eventually built, and the tilma bearing her miraculous image is displayed in an adjacent basilica to this very day.

All of this took place at a time when the Aztecs were ritualistically slaughtering millions of innocent people in the belief that their blood was needed in order to satisfy the pagan gods they worshipped.

Though Christianity had been brought to the continent by Franciscan missionaries more than ten years earlier, attempts to convert the native population to the one true faith were advancing slowly.

War and violence and despair ran rampant. All seemed lost, if not for the intervention of heaven itself, and it was precisely at this moment in tie that Our Lady appeared, delivering the Word of God once more, as only she could, into a land that stood in desperate need of evangelization.

In the decade before Our Lady’s miraculous appearance, two hundred thousand natives were baptized into the Church in this land flowing with the blood of the innocent; in the ten years following the miraculous appearance of Mary, the Mystical Rose, the conversions numbered about nine million.

The wonderful details of Our Lady of Guadalupe cannot be adequately shared in this space. It’s a story that extends well beyond the shores of present day Mexico; originating with Mary’s faith-filled “yes” and moving through the passion, death and resurrection of her Son; flowing from the Middle East through Europe, and it is only from there that it makes its way to the New World where the Queen of Heaven would one day call out to a humble peasant named Juan Diego – a man whose own faith-filled response opened the way for the evangelization of the Americas.

And that, my friends, is how the west was really won.

The intricacies of this incredible story, including a breathtaking overview of the numerous scientific evaluations and observations that have been made relative to the tilma, are recounted in all of their magnificence no more beautifully than in the film, The Blood & The Rose.

This critically important, feature-length documentary directed by Timothy Watkins (In the Face of Evil) with Executive Producer, Steve McEveety (The Passion of the Christ), and narrated by Eduardo Verastegui (Bella, For Greater Glory) was filmed on location in both Spain and Mexico and  is a labor of love more than six years in the making.

“Through the miraculous image imprinted on the tilma, Our Lady continues to speak across the centuries to each and every human person who, knowingly or not, is engaged in the battle of good versus evil and the battle for souls,” said Mr. Watkins. “The message and the call remain the same.”

“Our hope for this film,” he continued, “is to inspire a new generation of messenger eagles who, following the example of St. Juan Diego, will faithfully deliver the Word of God anew into our culture; a culture that also stands in desperate need of evangelization.”

On Thursday, January 24, 2013, at 7 pm, at the Warner Theater in Washington, D.C., the premier showing of the film will take place.  (More information is available here.)

In addition to a showing of the film, this spectacular fundraising event to benefit Catholic Charities of the Archdiocese of Washington, D.C. will include a lineup of inspiring speakers, including popular ETWN program host and Mariologist, Fr. Leo Patalinghug, offering attendees a unique opportunity to reinvigorate their faith while also lending valuable support to an agency that serves the neediest people in and around our nation’s capital.