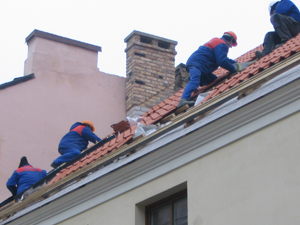 Father’s Day is a day for honoring fathers. But I would like to take a step back and honor men as husbands. In our enlightened, liberated era, we have a tendency to overlook men as husbands, since the father is so often not the husband of the mother. But without some kind of connection between the man and the woman, there is quite literally, no child. I’d like to make the case that the most important thing fathers can do for their children is to love their mother. And likewise, among the many things mothers do for their children, one of the most important is that mothers love their children’s father.

As with so many things, our family learned this from our experience with disturbed children. We encountered a gifted therapist named Nancy Thomas who taught us that attachment disordered children need a strong mother figure to whom they can attach. These children don’t really believe that anyone can take care of them, that the universe is fundamentally a hostile place, and that they must take care of themselves. If the child perceives any weakness in the mother, the child cannot entrust himself to her.

It was my husband who first went to Nancy’s workshop and came back filled with excitement. “You have to be sure of yourself. You can’t let the kids bug you. You have to stay cheerful, even when they are trying to wear you down, because they think it is funny to wear you down. And my job,” my husband said to me, “is to support you. I have to build you up in their eyes, so they will respect you. If they can’t respect you, they can’t heal.”

Truthfully, I had no idea what he was talking about. But it sounded good, so I tried being more decisive with the kids. Even more important than the impact on our kids, was the change in our marriage. My husband made every effort to back me up. He responded to any hints of disrespect from the kids. And, incidentally, he understood that I sometimes needed a break from the daily-ness of dealing with kids. He became much more willing to honor my requests for rest, especially when I made those requests without whining. Through all these things, his being a better husband made me a better mother.

Well, I don’t know about you, but I can overlook a lot of dirty socks on the floor for a guy who calls me “queen.” And, by the way, it really did help our kids’ development to see us show one another that kind of respect and appreciation.

The feminist movement introduced an unbelievable amount of tension into the relationships between men and women. Feminism gave us women permission to nag and criticize our husbands, which most women can do just fine without any special permission. The legacy of the feminist movement has been to turn the home, which should be the place of cooperation, into a sphere of competition between men and women. And ironically, feminism, which was supposed to be about getting beyond stereotypes, supported the most negative of stereotypes about men.

I have my own pet theory about the stereotype of men dragging their feet about getting married. The socio-biologists claim that men want to invest their seed in as many women as possible, and therefore do not want marriage. I think this is only a dim shadow of the whole truth. The whole truth must include this great fact about men: They are capable of heroic loyalty. When men finally do marry, they are capable of committing themselves to the care of their wives and children. Many men spend a lifetime working at jobs they don’t like very much, for the love of their families. When men marry, they take it very seriously. It is women who initiate most divorces. It is divorced men who commit suicide at twice the rate as married men, while divorce has little impact on the suicide propensities of women.

When women marry, we get things that we want and value. We get the opportunity to become mothers. We get a home, our nest for our little ones. What do men get? They get the right to throw themselves on a live grenade for the protection of their families. Or, as St. Paul suggested to the Ephesians, husbands get the right to be crucified.

Most men, with an insignificant number of exceptions, are capable of this heroic loyalty. We women can call this out of our men. We don’t achieve this by nagging. We certainly don’t achieve it by competing with them over who makes the most money, or by keeping score with them on who does the most household chores. We need to build them up, as St. Paul says. Watch them sit up straighter and taller when we appreciate and admire them.

We need to build up our marriages because our children suffer from broken relationships or non-relationships. We now know that father absence inflicts a wound on children that social science can measure, but only partially fathom. We are finding that even the children conceived by artificial means long for a relationship with their fathers.

So if we are going to honor fathers, we women have to honor our husbands, as husbands. And sometimes, just sometimes, we will find that they will honor and build us up as well.