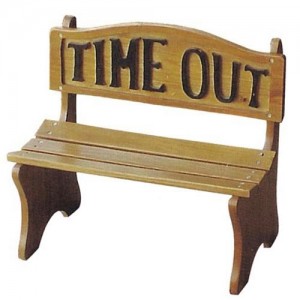 For years, I have arduously avoided the one topic that most certainly will incite a reader riot. However, I find I can stay silent no longer.

As hard as I am trying to fulfill a promise made to myself made years ago while sitting in front of a blank computer screen fighting writer’s block (“I don’t care if I have to type pages of the phone book, I will never, ever, ever write about spanking”), the issue has been put anew into the public debate, and I simply can’t stick my head in the sand and hope it goes away.

I’m reticent, because in nearly 22 years as a mother, I’ve concluded that no topic in the realm of parenting elicits a more vehement response from opponents and proponents. This is one issue about which there is no middle of the road.

If you are against spanking, you’re likely to be in the “spanking promotes violence in society” camp. You may have painful memories of being spanked as a child that inform your opinion. Or perhaps having never been spanked yourself, you are certain it is always unnecessary.

If you oppose spanking, you’re typically an advocate for “timeouts” and other disciplinary tactics to manage unacceptable behavior in children. You’re confident kids will grow out of their childish ways in time, and anyway, you just can’t bring yourself to do it.

You make a number of good points.

If you support spanking as a disciplinary tool, you’re likely to be on the “a little smack on the bottom never hurt anyone and may keep a kid from running into the street” team. Your memories of being spanked as a child are vague, or at least not disturbing, and you certainly wouldn’t call a swat on the rear “child abuse” or “violence” or even “hitting.”

If you think spanking can be OK, that opinion might reflect a general sense that it’s the job of parents to teach children how to behave appropriately in given situations, rather than wait for kids to decide to do this on their own, and you want kids who don’t just cooperate, but who also obey.

Your points would be well taken, too.

In fact, the spanking debate reflects the wide range of tactics parents use in the course of raising their children. Ultimately, spanking is a profoundly personal decision about how best to parent one’s own children, and thus, the reason I’ve distanced myself from the discussion.

Last week in Corpus Christi, Texas, Judge Jose Longoria sentenced Rosalina Gonzales to five years of felony probation for spanking her 2-year-old child. (Red marks on the child’s backside were noted by the paternal grandmother and reported to a doctor.)

I don’t know the full story about Ms. Gonzales’ parenting struggles. News reports say she does not have custody of the child she spanked and two other children, and is working with the state to regain custody. The judge also ordered her to take a parenting class, so perhaps she is an unskilled mother.

Soon enough, the government should produce a parenting book so we know what will and will not be permissible in our homes. Is Judge Longoria a fan of grounding teens who stay out too late? Do “we do that” anymore? Are we allowed to closely monitor our kids’ activities via their cell phones or Facebook pages, or is that a violation of their privacy? Better check with the judge.

When a judge – or the government he represents – starts defining best practices in child-rearing, our nation is headed in a direct we do not want to go.

Debate spanking all you want, but let’s hope parents on both sides of that debate agree it is theirs to decide.