Trending Now
You are at:Home»Featured»“I Am a Mystery to Myself” The Last Days of Padre Pio
By Fr. Gordon J. MacRae on September 20, 2012 Featured, Vocations 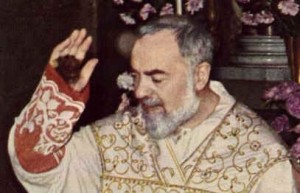 For half the 20th Century, Saint Padre Pio suffered the wounds of Christ. All of them, including the cynicism of doubt and the tyranny of false witness.

In the August-September issue of Inside the Vatican magazine, Australian journalist Paul MacLeod has a fascinating article reviewing two books by Paul Badde, The Face of God (Ignatius Press 2010) and The True Icon (Ignatius Press 2012). The two books “read like detective stories,” MacLeod wrote, as they examine in great depth two of the Church’s most revered treasures, the Shroud of Turin and the “Volto Santo,” the image of the Holy Face hidden for 400 years and believed to be the second burial cloth of Jesus, the sudarium.

The origin of the veil can be one of two sources, or a combination of both. Though the story never appears in Sacred Scripture, there is an ancient legend that a woman offered her head-cloth to wipe the face of Jesus on the way to Golgotha. When he gave it back to her, as the story has it, an impression of his face remained on the veil. What is now the Sixth Station of the Cross was legendary in Rome since the 8th Century. The name tradition has given to that woman is Veronica, a name that appears nowhere in the Gospel narrative of the Passion of Christ.

The veil is believed to be one of two burial cloths of Jesus, though it’s possible that both accounts are behind this treasure. On the morning of the resurrection, the Gospel of John (20:7) reports, the smaller burial cloth of Jesus – the veil covering his face – was rolled up in a place by itself as witnessed by Saint Peter and Saint John. In Jewish custom in the time of Jesus, such a veil covered the faces of dignitaries, such as the high priest, in death before being entombed. It is this veil that many now believe is enshrined at Manoppello. In contrast to that other, larger burial cloth – believed by many to be the Shroud of Turin – the image on the veil is not that of a dead man, however, but of a man very much alive, his eyes wide open. It is Jesus the Christ, having conquered death. In Inside the Vatican, Paul MacLeod described the Veil of Manoppello as:

“. . . a delicate, transparent piece of expensive material, measuring just 28 cm by 17 cm,   in which the face of Jesus seems to float in light, even to store light.”

Paul MacLeod reported in the article that Capuchin priest, Father Domenico de Cese, formerly custodian of the shrine, was killed in an accident while visiting the Shroud of Turin in 1978. A decade earlier, however, Father Domenico wrote of a rather strange occurrence. On the morning of September 22, 1968, Father Domenico opened the doors of the shrine, and was startled to find Padre Pio kneeling in prayer before the image of the Holy Face. Padre Pio was at the same time 200 kilometers away at San Giovanni Rotondo, gravely ill, and near death.

“With My Body or Without It”

It was his last known occurrence of bilocation, a phenomenon that, like his visible wounds, became a source of skepticism about Padre Pio both in and outside of the Church. At 2:30 AM on the next morning – September 23, 1968 – Padre Pio died.

The two stories placed together – Padre Pio’s death and his prayer before the Veil of Manoppello – make perfect sense to me. In the hours before his death, Padre Pio contemplated the burial cloth of Christ. After fifty years of bearing the visible wounds of Christ, Padre Pio’s own soul sought out this visible link to Jesus beyond death; not Jesus crucified — a reality Padre Pio himself had lived for fifty years – but the image of the face of the risen Christ.

Padre Pio seemed most hesitant to discuss either his wounds or the reported incidents of bilocation. He seemed hesitant because in life he did not understand them at all. In fact, a Vatican investigator learned that all the events of bilocation were reported by others, and never by Padre Pio himself. It wasn’t until he was directly asked by the investigator that he described bilocation:

“I don’t know how it is or the nature of this phenomenon – and I certainly don’t give it much thought – but it did happen to me to be in the presence of this or that person, to be in this or that place; but I do not know whether I was there with my body or without it . . . Usually it has happened while I was praying . . . This is the first time I talk about this.” (Padre Pio Under Investigation, Ignatius Press, 2008, p. 208).

Those September days preceding Padre Pio’s death in 1968 must have been the strangest of his life. The visible wounds became so central to his sense of self for a half century that I imagine he had difficulty even remembering a time when the wounds were not present. Even a great burden carried for years upon years – I have learned the hard way – can become a part of who and what we are. We cannot imagine Padre Pio without these wounds. We would have never even heard of Padre Pio without these wounds. So in that sense, the wounds were not for him. They were for us.

But in the days before Padre Pio died, the wounds on his hands and feet and in his side began to close. He received those wounds on the morning of September 20, 1918. Fifty years later, on September 20, 1968, after a few days of the wounds slowly diminishing, all traces of them were gone. The wounds were then only within Padre Pio. Visible or not, they were a part of his very self.

Two years ago on These Stone Walls, I wrote of the day those wounds were given to Padre Pio. “Saints Alive! Padre Pio and the Stigmata: Sanctity on Trial” told the story of how this saint among us struggled with what had happened to him, and the lifelong trials that were set in motion by those visible wounds. I hope you will read it to honor him this week. That post includes a moving account of the Stigmata in Padre Pio’s own words in a letter to his spiritual director a month after receiving the wounds.

But it was the stories of bilocation that caused so much skeptical doubt. In May of 1921, the Vatican commenced its first of several investigations into Padre Pio’s life. The investigator, Monsignor Raffaelo Carlo Rossi, tried to refuse the assignment because he admittedly went into it with a “prejudice against Padre Pio.” After months of interrogations, depositions,  interviews with other friars, and testimony by many laypeople, Bishop Rossi’s file was ordered sealed, and it remained sealed as a secret Vatican file for decades. The investigator concluded his file: “The future will reveal what today cannot be read in the life of Padre Pio of Pietrelcina.”

That investigator, we now know, left San Giovanni Rotondo with no doubt whatsoever about the true nature of Padre Pio, but it wasn’t enough to curtail years of further suspicion and persecution from within the Church. I described much of that in “A Priest and His Wounds: Padre Pio Under Investigation.” The story of Padre Pio’s treatment is best summed up by Father Paolo Rossi, former Postulator General of the Capuchin Order, and it seems a bit familiar:

“People would better understand the virtue of the man if they knew the degree of hostility he experienced from the Church… The Order itself was told to act in a certain way toward Padre Pio. So the hostility went all the way up to the Holy Office and the Vatican Secretariat of State. Faulty information was being given to Church authorities, and they acted on that information.” (Making Saints, Simon and Schuster, 1990 p. 188).