Trending Now
You are at:Home»Featured»The Winners and Losers From QE3
By Dr. Mark W. Hendrickson on September 20, 2012 Featured, The Economy 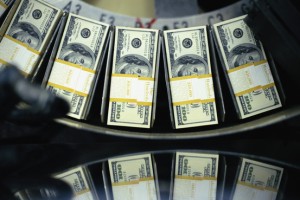 The only doubt about the Federal Reserve’s decision to embark on a third round of quantitative easing was about when it would begin. It was a foregone conclusion that Chairman Ben Bernanke’s Fed would resort to more quantitative easing. Under his leadership, the Federal Reserve has become a one-trick pony. Their solution for every economic challenge is always the same: create more dollars.

Like the earlier iterations of QE, QE3 is pernicious public policy based on faulty economic notions. Let’s examine some of the fundamental problems with QE3.

First, Bernanke says that the Fed will expand its balance sheet by $40 billion per month potentially ad infinitum and at least until the U.S. labor market begins to improve. Bernanke was noticeably reticent in explaining how printing money is supposed to reduce unemployment. Unemployment is a price problem, not a monetary problem; therefore, unemployment can only be cured by the presence of a free market in wages, not by central bank actions. (In Bernanke’s defense, Congress shares the blame here as long as it retains the misguided law that charges the Fed with promoting maximum employment.)

The mistaken belief that a central bank can increase employment is the result of two persistent theoretical errors in economics. One is the so-called “Phillips curve,” named after the British economist who posited that high rates of inflation and unemployment could not exist at the same time, and so, a boost in inflation lowers unemployment. The data never supported that theory, and the stagflationary 1970s totally destroyed the validity and credibility of the Phillips curve.

The other theoretical error is the Keynesian notion that government stimulation of “aggregate demand,” achievable through monetary as well as fiscal policy, can boost employment. Yes, government can stimulate employment in areas that receive additional funds (often government’s cronies) but those gains are more than offset by losses in employment elsewhere in the economy. Government stimulus policies produce no net employment.

Speaking of cronyism, QE3 is primarily a Wall Street bailout. Bernanke announced that the $40 billion they create each month will be used to buy mortgage-backed securities (MBSs). And who currently owns those securities? Yep, financial firms.

There are two possible ways in which the Fed’s purchase of MBSs can aid Wall Street. First, MBSs of dubious value (the ones that contain unsound and therefore unmarketable mortgages) are toxic assets that will be taken off financial firms’ books. Other MBSs are super-safe, so by taking those off the market, investors searching for yield will be forced to look to corporate bonds, thereby lowering corporations’ cost of borrowing.

We shouldn’t be surprised that Wall Street would be a primary beneficiary of QE3. Bernanke stated publicly that QE2 must have been successful because the stock market went up as a result. Unfortunately for most Americans, though, the rest of the economy didn’t share Wall Street’s good fortune the last time, and there is no reason to expect a different result this time.

Indeed, what most Americans can expect to get from QE3 are dollars that lose even more purchasing power as their supply continues to swell. There is a constituency for a weak dollar. Even Mitt Romney seems to fall into this camp when he rails about Chinese currency manipulation. Who benefits from a weak dollar? Exporters do, but all the rest of us, as consumers, lose. From our perspective, I’m sure we’d all rather have a dollar that buys more than a dollar that buys less. The weak-dollar advocates seem to be in the thrall of 16th-century mercantilist ignorance, believing that prosperity comes from moving as many economically valuable goods as possible to foreign lands.

Bernanke also announced that the Fed will continue to ZIRP us (i.e., maintain its “Zero Interest Rate Policy”) until at least 2015. Frankly, I think the Fed will feel forced to make this policy permanent. By artificially depressing interest rates, the Fed has enabled Obama and Congress to continue their insane overspending. If the Fed instead had refused to buy federal debt, then interest rates—and therefore the annual cost of servicing the gargantuan federal debt—probably would have soared, thereby making it much more politically difficult for Congress and the White House to continue adding over a trillion dollars of debt per year.

Instead, by facilitating the reckless expansion of debt, the Fed is painting itself into a corner. As the debt balloons toward $20 trillion or more in the next few years, it is probable that Bernanke or his successor will feel compelled to do everything possible to try to suppress interest rates so that the deadly government game of hyper-debt doesn’t collapse. This raises the specter that the United States is doomed to many long, gray Japan-like years of economic twilight, with growth in the private sector being choked off through a rationing of credit so that the government and its Big Business cronies can hog low-interest credit while would-be new businesses that are the engine of job creation are left to fend for themselves.

Some would say that the economic costs of QE3, however regrettable, are necessary to avoid a catastrophic deflation, and that is Bernanke’s well-known “prime directive.” Indeed, deflation—which is accompanied by debt defaults, business bankruptcies, higher unemployment, and lower output—is painful in the short-run. This obsessive focus on the short run has been a hallmark of economists playing the political game ever since Keynes advised governments and glibly avoided addressing the long run with his classic “in the long run, we’re all dead” non-answer.

The problems with using more inflation to delay deflation are these: The government perpetuates the malinvestments that its earlier credit expansion caused. These are businesses that would not be economically viable in a free market. Many such enterprises are kept on life-support as long as government staves off deflation. Who benefits from government thwarting the market’s attempts to liquidate these uneconomic enterprises? The owners and employees of those businesses. Who loses? Society in general, because enterprises that cannot survive without government intervention are wasting precious scarce inputs fundamentally uneconomic—that is, wealth–bleeding—activities.

The problem is, sooner or later, the uneconomic misuse of valuable inputs has to stop. The longer the Fed delays the day of reckoning, the more painful that day will be.

The situation is analogous to fire management in Yellowstone National Park. For decades, it was government policy to extinguish fires in the park. In the short run, the policy appeared to be a success. In the long run, it was a disaster.

The flaw in their theory was that forests need periodic episodes of destruction to clear out old growth and dead wood so that new, more vigorous growth can flourish. Because official policy thwarted this natural process of renewal for many decades, Yellowstone became a tinderbox. In 1988, the accumulated debris and dead wood of decades was consumed in a catastrophic conflagration that covered half the park. The destruction wasn’t permanent. In fact, the park is much healthier today than it was in 1988, but 1988 was hell in Yellowstone; more than that, it was unnecessarily caused by the misguided policy of trying to prevent natural cycles from operating.

Bernanke is like the federal policymakers who ended up incinerating half of Yellowstone because they weren’t willing to allow smaller corrective episodes to occur. This country will some day pay an awful price in economic pain and disruption from Bernanke’s refusal to let market forces correct economic errors on a smaller scale; instead, Bernanke is guaranteeing that when the piper finally gets paid, it will happen on a catastrophic scale. QE3 is another step along this tragic path.

There may be a few short-term winners from QE3, but in the long run, the American people are the losers.

[Editor’s note: A version of this article first appeared at Forbes.com.]