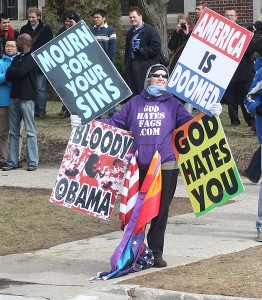 On March 2, the Supreme Court issued a decision in the case Snyder v. Phelps that illustrates the difficulty of balancing competing claims to rights and justice in our judicial system.

The court overturned a lower court’s $5 million tort judgment against Pastor Fred Phelps of the Westboro Baptist Church of Topeka, Kansas, for invasion of privacy and inflicting emotional distress on the Albert Snyder family.

In case you haven’t heard, Phelps and his little band of coreligionists had chosen the funeral of Mr. Snyder’s son, Matthew, a Marine who perished in Iraq, to hold up signs containing such niceties as “God hates you,” “You’re going to hell,” and “Thank God for dead soldiers.” (If you want to see a long list of disgusting signs displayed by the Westboro group, click here). Phelps opposes and condemns various public policies (e.g., gays in the military) and private matters of conscience (e.g., religious affiliation, in this case, the Snyder family’s Catholicism). In Snyder v. Phelps, the Supreme Court ruled 8-1 that the First Amendment right to free speech trumped the relevant tort doctrines under which Phelps had been found at fault.

I rarely play Monday morning quarterback after a Supreme Court decision. I am not a lawyer, nor do I know all the facts and pertinent legal precedents of this case. There were multiple legal issues, each with its own complexities, raised in this case (e.g., infliction of emotional distress, invasion of privacy, civil conspiracy, states’ rights, etc.). I acknowledge the immense difficulty of coming to a single “right” ruling. I believe that all nine justices acted in good faith. It seems to this observer, though, that the opinion of the dissenting justice, Samuel Alito, was superior to the majority’s position.

All nine justices emphasized our right to free speech—a right that some powerful Americans have sought to curtail (see my March 4 article). If we are to remain a free people, we cannot censor words or ideas just because they are ugly, unpopular, revolting, venomous, or abhorrent.

However, that does not mean that offensive language can be used anywhere or anytime. For example, we rightly bar people from walking into kindergarten classes and dropping a string of f-bombs. Such restrictions don’t endanger our precious liberty.

Similarly, I concur with Associate Justice Alito’s opinion in Snyder v. Phelps that, “Allowing family members to have a few hours of peace [at a funeral]without harassment does not undermine public debate.” Alito really nailed the issue with this statement: “In order to have a society in which public issues can be openly and vigorously debated, it is not necessary to allow the brutalization of innocent victims.”

Perhaps I am guilty of wanting to have my cake and eat it too, but can we not have both a right to express our beliefs and also have government fulfill its primary purpose of protecting individuals from acts of aggression? Make no mistake about it: The Snyder family was the target of a deliberate, pre-meditated, unprovoked assault.

The Snyders had done nothing to Phelps. The Snyders weren’t responsible for any of the national policies to which Phelps objects. Matthew Snyder’s funeral was a private family matter, not a public event. Don’t the Snyders — indeed, all Americans — have a right to be protected from hurtful, unprovoked, sadistic assault? Does our Supreme Court want to turn the First Amendment into a license for anyone to intentionally inflict emotional anguish on a grieving family at a moment of maximum vulnerability?

Yes, Phelps has rights, but so do the Snyders. And yet, in Snyder v. Phelps, the Snyders’ rights were abrogated for the sake of Phelps’ rights. Surely American jurisprudence is broad enough to protect both Phelps’ right of free speech and the Snyders’ right to protection. As Justice Alito wrote in his dissent, there are thousands of places at which Phelps and Co. could have had their say without inflicting emotional duress on the innocent Snyder family.

There is a story (whether true or apocryphal, I know not) about a first-year law student who strongly objected in class to a judicial decision that was being discussed. “This is NOT justice!” he exclaimed to his professor. The experienced legal scholar calmly replied, “Young man, if it’s justice you want, go across the street and enroll in the divinity school; THIS is the law school.”

It seems to me that Mr. Snyder didn’t receive justice from the Supreme Court. May he be healed of his pain and find his justice in a court higher than the erroneously named “Supreme Court.”