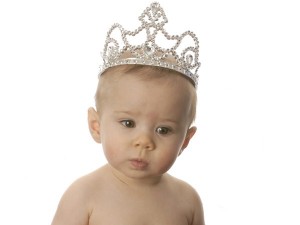 Last week the world celebrated the birth of a “Royal” baby in England. In America, every baby is a royal baby!

In these United States “We the People” are king, judge, and lawgiver, and so an abortion in the land of the free is an even greater offense. When a mother decides that her convenience trumps her son or daughter’s life, she is an accomplice in more than the death of a child but also a neighbor, a judge, and a king.

Who among men and gods is fearful of the birth of a king? — Pharaoh, Herod, and Lucifer. That is the team picture that you’re a part of when you call yourself “pro-choice.”

Where she attends school; where her child attends school; whom she will marry; the pumps, the flats or the wedges; the cabernet or the zinfandel; Republican or Democrat; caramel macchiato or café mocha; natural or enhanced; the bob or the weave; to work corporate or to raise a family; to buy or rent; the dog or the cat; oak or cherry; the little black dress or the comfortable sweats. Well, maybe not the sweats, yoga pants then.

But I completely disagree with a woman’s right to “choose” to murder her children and call it “family planning.” Calling abortion “choice” or “reproductive rights” will not remove the bloodstains from Lady Macbeth’s hands. The death of language is no alibi for the death of a human being, created in the image of God. I cannot agree with a woman’s right to choose to do wrong and then hail it as a virtue that we all must bow to, surrender, and salute.

I don’t believe in misusing the first divine institution (free will) to snuff out the third (family). Jefferson was right: when God created man he gave him liberty at the same time. Created in the image of God we are creatures of choice meant to fellowship with the Godhead. And this is the crux of the great evil that is abortion; it is the ultimate rebellion against God. It is the fist in the air, shaken at the Almighty. It is contrary to nature and nature’s God. It is the attempt to deface the very image of God, to thrust one’s finger into His eye.

So what of the royal fetus? Would there have been outrage if Kate had chosen abortion? If the royal couple would have decided that now was not the right time or that “it” was not the favored sex? Outside of the coven of extreme feminists, of NARAL, and of NOW, how would the world have taken the wanton slaughter of the third in line to the British throne? And just why should that pregnancy, fetus, child, or birth be treated differently than the black fetus in Harlem that was just burned, dismembered, sucked out, and bagged as medical waste?

This is one reason that I didn’t mind the media coverage of the royal baby. I relished it. It was the first time in a long time that they recognized a child in the womb was an actual child with a destiny to be anticipated and cheered. In a strange way it reminded me of the hype surrounding the birth of John the Baptist. And so it should. And so should every triumph of the womb. Across the globe, every birth should be celebrated!

Surely such “pro-choice” newspapers and journals (and people) should be talking about a bunch of pluripotent stem cells, an embryo or a fetus. For reports suggest that the Duchess is still in her first trimester, so this is not yet a baby and certainly nothing with any kind of destiny. At this stage, surely, it is a non-person, just like the other 201,931 non-persons who last year were evacuated from wombs in England, Scotland and Wales.

When my aunt was a missionary in Nigeria, she would walk along the rivers and by the dung pile to search for abandoned babies left to die of exposure or crocodiles. Would it be more shocking to Americans if this were the mode of infanticide that they had to “choose” instead of the comfort of an outpatient “clinic?” Those civilized souls who look down on those who tossed virgins into volcanoes stand guard over the systematic destruction of over 50 million fellow human beings, and don’t reckon the irony. Those who rail against the dark pages of American history, against the holocausts, pogroms, and genocides of a lesser people, proudly stand in favor of America’s hidden holocaust.

Well I for one would like to congratulate William and Kate on the birth of their baby boy, and to all those who have chosen life, I am grateful.

May the birth of this child place a stone in the shoe of those who walk so casually by the graveyard of a lost generation. And may God have mercy on their souls.