Trending Now
You are at:Home»Featured»In Armenia, the Pope Will Visit a Very Special Convent
By ACN-USA News on June 24, 2016 Featured, MyChurchParish.com, Those in Need 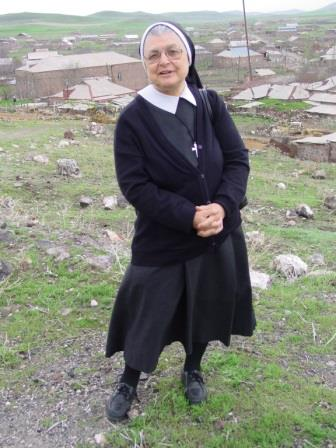 GYUMR?, Armenia—Sister Arousiag proudly points out the dormitory of the convent of Our Lady of Armenia here: it is where Pope Francis will rest for a few hours on the second day of his June 24-26, 2016 visit to Armenia.

“It is the best room we have,” she assures a visitor from the international Catholic charity Aid to the Church in Need (ACN), which has been supporting the convent for a number of years.

In the background group of children is singing in Armenian; they are rehearsing for when the Pope arrives. The children in question are some of the 37 little ones living in the orphanage run by the Sisters—and whose whose singing the Pope has in fact already heard, in April 2015, during the Mass celebrated in at St Peter’s in observance of the 100thanniversary of the Armenian genocide.

ACN has supported the work of the Sisters her ever since 1997. Their commitments also include running of a daycare center for the elderly and a summer camp for orphaned and deprived children. Last year no fewer than 890 young people took part in this summer camp, among them 40 Syrian refugee children.

Upstairs in the convent, where the teenagers live, Anahir, 16, holds a young child in her arms. Her father passed away many years ago and her mom was unable to care for her. She says that the young residents of the convent are “very happy about the Pope’s visit and that they spend a lot of time waiting for this moment.”

The congregation of the Immaculate Conception in Armenia consists of seven Sisters working in various different centers throughout the country. Pope Francis will come to this convent after celebrating Holy Mass in the central square of Gyumrí, which is the second largest city in Armenia, one still bearing the marks of the terrible devastation caused by the earthquake of 1988, in which more than 25,000 people died.

“A visit to the first-ever Christian country”—such is the theme of the papal visit. It was in the year 301 that King Tiridate III first proclaimed Christianity as the religion of the Armenian state, thus making it the first nation in the world to formally adopt Christianity—12 years before the Emperor Constantine made it legal in the Roman Empire.

“We are very grateful to ACN, because you have helped us for many years,” said SisterArousiag, who added: “We depend on the support of various different organizations, and ACN is one of the best benefactors we have.”

A few yards from her, watching attentively, stands Rosa, a woman of 72, who ceaselessly touches the cross around her neck. “I’m very grateful for everything the sisters do for us,” she said; “None of my three sons can take care of me because they live a long way away, and so the Sisters are all I have.” Sisters provide the elderly three meals daily and also offer them the chance of a hot bath—because most houses in the area do not have hot water.

Thanks to the generosity of ACN’s benefactors, the Sisters of the Immaculate Conception have also been able to offer catechism classes at the children’s summer camps; renovate the daycare center for the elderly; and to purchase the land on which the convent sits.