It is a commonplace among believers in God’s written word to express a longing to have lived in the times depicted within its pages. To have seen, perhaps even conversed with, such towering figures of faith as Abraham, Moses, Samuel, and Nehemiah. To thrill at the great victories God granted through Joshua, David, and Jehosaphat. To imagine as we read their still-fiery words, what it would have been like to hear the messages of Isaiah, Ezekiel, Hosea or Sts. Peter and Paul ring in our own ears.

Bible times seem so exciting — angels walked the earth and miracles abounded. God thundered from mountaintops at Israel and whispered to Elijah in a cave. Gideon yelled and God’s enemies were t 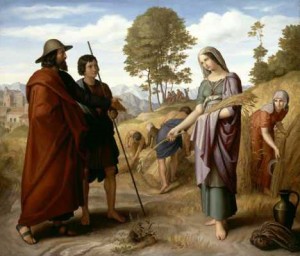 hrown into confusion. Samson collapsed the idolaters’ house in on top of them. Daniel walked as safely among lions as his three young friends walked in fire. A touch from Elisha’s bones brought a man back from the dead; Peter’s shadow cured the sick.

But these are historical highlights, punctuations of the centuries. The quotidian reality for most people was opaque to the supernatural. Angels did not routinely show up for lunch. Crops failed from time to time and no handy prophet kept the larder full. Sicknesses were medicated when they could be and endured or died from when they couldn’t be. People grumbled over government injustice and stumbled over clerical outrages and the ground did not open and swallow the perpetrators. Criminals wreaked havoc in ordinary lives and enemies pillaged without being struck down by the angel of death.

Ordinary people lived in the long shadow of great events without participating in them. They heard about, rather than saw, great acts of salvation. Prophets were a rumor more than flesh-and-blood reality and miracles believed more than seen. Folks knew that long ago and sometimes nearby, but more often faraway, something astounding had occurred. But they were not astounded; they were busy. There were spouses to court, animals to feed, markets to visit, water to draw, equipment to repair, sibling squabbles to settle, a thousand errands to run, and not enough hours in the day. Most people would say, as we do, “I have a life.”

Were we to visit, life in Bible times would feel familiar to us — once we got used to being deprived of modern conveniences. It would not have been some world of frequently parting seas and floating ax heads, where flaming chariots routinely carried off old preachers and your taxes were paid by the catch of the day.

Once Upon All Time

The Author of the Bible is the Creator of time and the story He tells in the Bible is not merely the story of all time, but it is the kind of coherent story that a sane person tells. It is a story wherein the character of a Person is revealed, as characters are revealed in stories, through the accounts of their actions in time. There is one main difference, though.

In a story about a human person there is change and growth as he is confronted with challenges and adversity. The character is developed, both as a plot device and within the story line, as the protagonist makes decisions, learns and adapts.

The Author of the Bible is not changing, growing, and adapting. He is the same, yesterday, today, and forever. In Him we live and move and have our being. In His story ours — of change and we hope, growth in the right direction — is embedded. And that is why our times are Bible times.