Trending Now
You are at:Home»Featured»Free Cars for the Poor?
By Donald P. Goodman III on January 12, 2012 Featured, The Economy 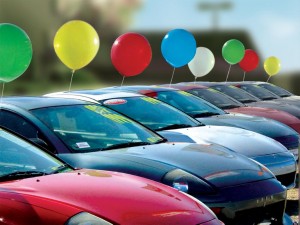 When I first saw this story, I was surprised. Then I was vaguely sympathetic, for a few seconds. Then, I became completely incredulous that anyone could think about this for more than a minute and still believe that it’s a good idea: Free cars for poor fuel road rage.

Not only did somebody apparently think that that “fuel” pun would be even mildly amusing, but somebody thought that the program this story describes was just a capital idea. Not only somebody, but a large enough number of somebodies to get it through a legislature and then signed into law. This is truly incredible. Robert A. Heinlein, a writer whose ideas are of at best mixed merit, once quipped, “A committee is a life form with six or more legs and no brain.” I’ve often equated this with the great American author Mark Twain’s famous appeal to his readers: “Suppose you were an idiot. And suppose you were a member of Congress. But I repeat myself.” (Seek elsewhere for a number of other amusing Mark Twain quotations concerning this institution.) But this legislative program really does underline the point like few others in recent history do.

Let me begin by saying that, working in the criminal justice field, I repeatedly see the difficulty that poor people have when they lack their own motor vehicle. They get in trouble for something, their license to drive is suspended, and then they have trouble finding work because they can’t drive around looking for jobs. Then, when they drive despite this in order to get a job, they get pulled over because the broken-down hoopties they’ve managed to borrow have dead headlights, are written a ticket for driving while suspended as well as for the dead headlight, and then, when they’re convicted, their license gets suspended again. This happens all the time, and it’s a real problem for the poor. Of course, many of the poor lack cars for another, and much simpler, reason: they just can’t pay for one without a job, but they can’t hold down a job without a reliable car.

But the problem is not that they don’t have cars; it’s that they need cars. It’s a fact of modern American life that, except in our largest cities (and then only those old enough to have a decent public transportation system), it’s more or less impossible to live prosperously without an automobile. This means that every American, more or less, is required in order to support himself and his family not only to secure food, housing, health care, and the various other necessities of life, but also to plunk thousands of dollars of his supposedly disposable income down on at least one automobile. He is further required by law to insure it sufficiently to cover likely liabilities, which means shelling out at least several hundred dollars a year. He is further required to keep that vehicle in maintenance—oil changes, oil filters, air filters, new tires, brakes, windshield wiper fluid, brake fluid, power steering fluid, electrical system, and on and on and on—not to mention to keep it full of that ever-increasingly expensive commodity, gasoline. If he does not do this, he is extremely limited in the jobs he can get; the places he can live; the places he can shop; and the places he can go to socialize.

And the Massachusetts legislature thinks, “Hey! Solution! Give away a bunch of cars!”

How about this: how about we try to set up our society so that we don’t end up requiring every citizen to purchase a monstrously expensive piece of equipment to perform the normal functions of civic life?

At this point the familiar objection floats in: but our society didn’t set itself up this way on purpose; it was just the free choices of individuals. People wanted to live in suburbs, and they needed cars to do that. So everything got spread out. So now everybody needs a car, because everything’s spread out. Surely you’re not advocating limiting the free choices of individuals?

The most obvious reply to this objection is that it itself limits the free choice of individuals. That is, it limits the choices, quite severely, of the individual who doesn’t want to have to own a car. Like myself; I’d much prefer not to own a car, I’ve selected a place to live that’s within walking distance of my workplace, but I still can’t reasonably live without an automobile because everything is so spread out nowadays. And I live in a relatively compact community compared to many in this country.

But second, the answer is, of course I’m willing to limit the free choices of individuals. We do it all the time; it’s called zoning. Oh, and other people’s property. And lots of other things. I can’t build a home wherever I want; there are zoning restrictions in most communities governing where I can build it. There’s land that belongs to other people that I can’t build on. Even unoccupied land that belongs to other people; even land that the owner hasn’t touched, or even seen, for decades, I’m forbidden to build on. What’s wrong with limiting the choices of individuals? Absolutely nothing, in itself; the question is whether the limitation is reasonable, not whether it exists.

Finally, one answers by saying that our current milieu uses legislation to encourage this incredible spreading out, which really isn’t natural or desirable considered in itself. Think not? Think about roads for a minute. What are these but massive subsidies given by the government to automotive transportation? These enormous subsidies might as well be direct gifts to Wal-Mart and other big-box stores; local retailers, who have great incentives to set up small shops in heavily-populated (read: walkable) districts, don’t need massive freeways to get their products because they’re buying more local products. But Wal-Mart, which ships its products from China and then trucks them to its stores around the country, needs enormous roads for its business model to work. It certainly can’t pay for these roads itself; no, the government needs to build roads for them and for other large stores that require enormous amounts of ground shipping.

But Wal-Marts are huge, because they have to be for their ridiculous business model to be profitable. So they build away from the populated centers—those places where people actually live. So roads need to be built to accommodate the Wal-Mart, as they always are. So anybody who can afford a car goes to Wal-Mart. So the local shops lose their business and go out of business. So there’s no reason for people to keep living in the population centers. So they migrate out to the suburbs. So more and more businesses move out to the suburbs, farther and farther apart. So, once again, you need to get a car if you’re to have any hope of living a normal life.

Think about our idiotic zoning laws, as well. (I said I liked zoning in principle, not in its current common form.) We zone “commercial” separate from “residential.” Why? Why can’t people actually live near the stores they’re going to? This forces businesses to move out of residential areas and into special “commercial” zones. It further forces manufacturers to move out of neighborhoods and into special “industrial” zones. So rather than walking five blocks to work and hitting a bar for a beer and then a bakery for some bread on the way home, people have to hop in their cars, drive several miles to their work, drive several more miles if they want to get to a bar, then drive several more miles if they need to stop for bread, which they will have to buy at a large, omnibus supermarket rather than at a bakery. Then, an hour later, they finally get home exhausted from dealing with ridiculous traffic as well as worn out from their long day at work. Isn’t this forcing people to buy cars?

There are certainly many other reasons people keep moving farther and farther away from everything but their beds, and some of them aren’t put it place by government (at least, not deliberately). But the least we can do is to stop encouraging such irrational expansion, even if we don’t actively discourage it.

My solution: zone things to encourage businesses and residences in the same general areas. Certain businesses, of course, will need to be separated: those which are particularly loud, particularly smokey, or otherwise cause some particular nuisance. But for the most part, people should be able to work, shop, and live in the same general area. And I’m not talking about slums; I’m talking about real, habitable dwellings. Let people live above their shops. When businesses apply for a building permit, don’t give it to them if there’s already too many businesses in the area in which they want to build. In this way, discourage large clumps of businesses from building close to one another. Stop subsidizing enormous businesses by funding huge roads that make distant, non-local, slave-labor production economically feasible. Rather, make those roads payable by toll, and make the toll sufficient to fully pay for them, so that Wal-Mart and Target (and you and I, for that matter) are paying for their own transportation and not getting enormous gifts from the public coffers. Cut or eliminate the tax on local goods sold by local retailers. And do any number of other things that our ingenuity might suggest to us. That way, people won’t need to buy a car unless they want one.

Plato famously said that the worst thing that could happen to the Republic would be the development of a class of people who contribute nothing to the body politic. We have that today, in many of our non-working poor. However, many of these poor are not in this situation by choice. They’re in this situation because they were forced into it, often largely because they couldn’t afford reliable transportation. They truly want to work, to produce, to contribute, but they can’t because our society is built around an incredibly expensive machine that everybody must have. And that, my friends, is an injustice.

Remedying that injustice by giving the poor cars is like remedying a fire by pouring gasoline on it. Let’s rather encourage local, livable communities in which a car is not really needed; not only would it do wonders for our obesity problem, it would do wonders to help our would-be-working poor.