Trending Now
You are at:Home»Featured»In Perilous Times We Need the Rosary
By Ron Quinlan on October 7, 2011 Featured, Live in Christ 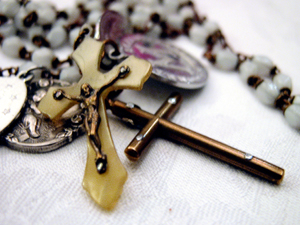 We live in such turbulent stressful times.  We hear of disaster after disaster, Hurricane Irene, earthquakes, the Japanese tsunami, a record number of tornadoes, disastrous floods in the North East, fires and drought across the South West.  Economically, each day seems to bring bad news.  We may yet tip back into a recession.  Crime and violence continue to be problems.  We seem to be trapped in endless wars.  There is also a constant underlying fear of terrorism.  There is so much to be afraid of, so much potential danger.

Maybe a large factor in all of this was a decline in the rosary.  One characteristic that identified Catholics of the past was our devotion to Mary and the rosary.  Now it seems only a few old people say the rosary.  For various reasons during the Sixties many people abandoned the rosary.  Is it a coincidence that the moral decline of our nation seems to have started at the same time?

Mary has begged us time after time to say the rosary.  At Fatima she promised if enough people said the rosary daily another world war could be prevented.  Prayer and fasting, especially the rosary has the power to stop wars.

Few people really understand how incredibly powerful the rosary is.  We all know of the terrible destruction of the nuclear bombs at Hiroshima and Nagasaki.  Yet at Hiroshima a single house eight blocks from Ground Zero suffered only broken windows.  All the Jesuits living there survived into old age.  A similar thing happened at Nagasaki with a house of Franciscans.  In both houses they said the rosary daily.  Every building and person around them was destroyed yet the only injuries they had came from broken glass.

I suspect more people would at least vaguely remember the fall of Marcos in the Philippines in 1986.  Tanks sent by him to crush the uprising were stopped by people kneeling in the streets saying the rosary.  There are many other stories of the power of the rosary.  The people of Austria give credit to a rosary campaign for the withdrawal of Soviet troops after World War II.  A Muslim fleet was defeated at Lepanto by an inferior Christian fleet in the 1500’s.  We all know about the fall of communism in the late 1980’s but do we realize that John Paul II declared 1987 to be a Marian year and millions prayed the rosary for the conversion of Russia?

The trick is to actually say the rosary on a daily basis and allow it to change you.  The more time we spend with Jesus in the rosary the more we will experience His peace in our hearts, the more we will experience a sense of protection and of being loved.  The rhythm of the rosary helps to quiet our mind so that we can more clearly hear His voice.  He helps to guide us in our thinking and decisions.  We become more like Him and this is what will lead those around us back to Christ.  Seeing His peace in us during such turbulent times makes others want this too.  Experiencing His love, not condemnation, through us will bring people to Jesus.

With all our concerns about terrorism and natural disasters, we would be well off to adopt the daily rosary and give it to Mary.  We have been given the power to change the world, one person at a time.  It starts with us.  All we have to do is really pray the rosary.