Trending Now
You are at:Home»Columnists»Hello? Anybody out there?
By Russell Shaw on October 7, 2011 Columnists, Featured, On Media 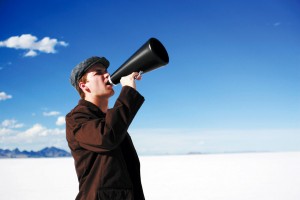 Draw yourself an organization chart representing the Catholic Church. What you’ll get is a sketch of an ecclesiastical institution that on paper looks like a genuine world class internal communication machine.

Those boxes and lines could lead the beholder to suppose that if the Pope says something on Monday morning, then by the following Sunday evening a billion or so Catholics around the world will have a pretty clear notion of what he’s said. The Church’s network of dioceses, parishes, organizations, institutions, and media all but guarantees that happy result.

Sorry, my friend, but if you think it really works like that, all I can say is: dream on. People who’ve spent some time in communication in and around the Catholic Church can tell you the reality is vastly different.

I was reminded of this by news of a study showing only 16% of American Catholics recall even hearing about the most recent of the “political responsibility” statement published quadrennially by the American bishops. And three-quarters of those who’d heard of it said it had “no influence at all” how they voted in 2008.

Yes, a small number of professional church watchers have argued about these documents ever since the bishops’ conference began publishing them in 1976. They have been, and to some extent still are, a big bone of contention between liberal and conservative activists. Whether that will be true of the version forthcoming for next year’s election—which, the bishops say, will simply be the 2007 text, with an introduction added—remains to be seen.

But hold that argument for another day. The point here is that, except for the activists, few Catholics have read or heeded these much-discussed documents.

It’s no surprise. As somebody who drafted many bishops’statements some years ago and did media relations on behalf of many others, I have no hesitation saying it’s been this way a long time. Not just with bishops’ documents either. The same is true of documents from the Pope and Roman Curia. Catholics by and large don’t read them or know what they say.

There are several reasons. Church documents tend to be long and difficult for people without much practice reading them. These days they’re readily available on the internet, but people still must make a small effort to access them—and they don’t. Priests rarely preach on them, and while Catholic papers faithfully report on them, many Catholics can’t be bothered to read the Catholic press to find out what’s going on.

Thus, what many Catholics know about the Church and the teaching of the Magisterium comes to them largely (if it comes at all) from the reporting of the secular media. And secular media generally do a better job covering high school field hockey than reporting important statements by the bishops and the Pope.

As suggested, though, the largest part of the problem lies elsewhere—with the lethargy and indifference of the numerous Catholics who know little about their Church and won’t make the effort it would take to know more.

Maybe it doesn’t matter. No one has to read an encyclical or a bishops’ statement to go to heaven. But at a time when the faith is commonly either ignored or misrepresented by secular purveyors of information and opinion, you’d think more Catholics would make that effort. Or am I the one who’s dreaming?