Trending Now
You are at:Home»Featured»In Syria, Food is ‘The Most Deadly Weapon of War’
By ACN-USA News on January 15, 2016 Featured, Those in Need 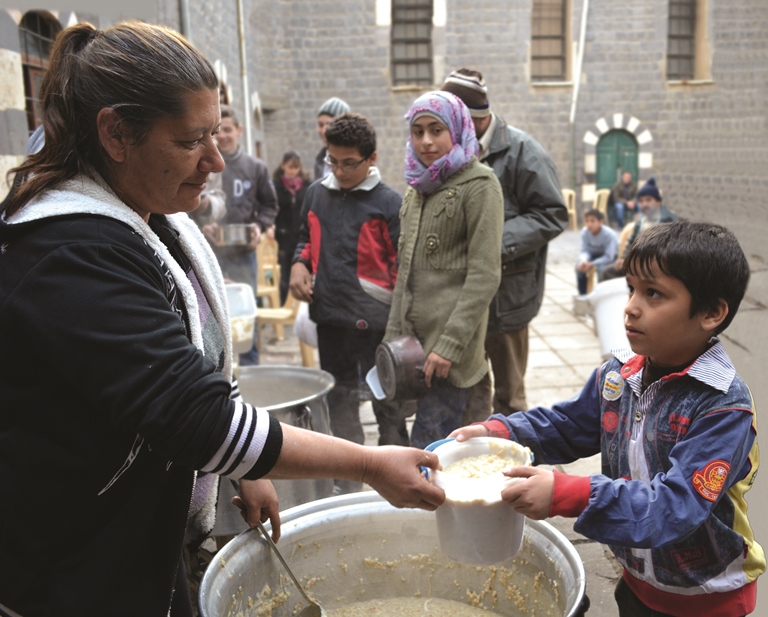 NEW YORK—Food has become “the most deadly weapon of war” in Syria, according to a leading Catholic charity’s Middle East expert, who charged that both government and rebel forces are blocking humanitarian aid to force entire communities—already on the brink of starvation—to submit to their rule. He added that rebels have confiscated humanitarian aid, selling it to the highest bidder to generate funds.

Father Andrzej Halemba, Middle East project coordinator for international Catholic charity Aid to the Church in Need, said that many groups are preventing food aid from getting through in an attempt to weaken the resistance of opposition groups.

The priest, who is in constant communication with Church leaders in Syria and who visited the country three times last year, said the crisis was putting extra pressure on aid organizations to increase emergency help to accessible areas.

Referring to the town north-east of Damascus where residents are reportedly starving to death, Father Halemba said: “There are quite a few places like Madaya where people are in desperate need but where help is not getting through.”

Amid reports that up to 4 million people in Syria are living in areas cut off from aid, the veteran priest cited statistics showing that, since the violence began nearly five years ago, 280,000 people had been killed in conflict—and that as many as 350,000 had died from lack of medicine and other essential supplies.

The charity is working with bishops in Damascus, Tartus, Aleppo and Homs as well as Jesuits and religious communities providing food, medicine, clothing and shoes in regions such as Aleppo, north-east Syria, as well as Homs, further south, and areas surrounding Marmarita and the Valley of the Christians.

He stressed how the crisis was compounded by a loss of power supplies in key areas. For example, Aleppo has been without a regular supply of electricity since mid-November, a problem made worse by freezing temperatures at night.

He spoke of the urgent need to provide aid to villages near the north-eastern city of Hassake, newly liberated from Islamist forces. At present, many internally displaced Assyrian Christians are unable to return to their villages because of the lack of basic supplies.

Father Halemba urged renewed prayers for Syria, especially for 79 Christians kidnapped form the Assyrian villages near Hassake and held by ISIS at its stronghold of Raqqa in the north of the country. Reports say the Islamists have requested ransoms of up to $35,000 per person.

The priest also highlighted the plight of Christians unable to pay the so-called Islamic jizya tax demanded in areas controlled by ISIS and other militant groups. He said that Christians were forced to pay jizya of up to $400 per year—an exorbitant sum for most ordinary Christians.