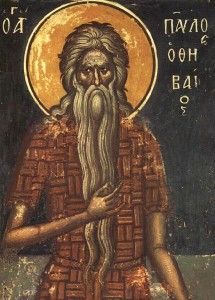 ST. PAUL was born in Upper Egypt, about the year 230, and became an orphan at the age of fifteen. He was very rich and highly educated. Fearing lest the tortures of a terrible persecution might endanger his Christian perseverance, he retired into a remote village. But his pagan brother-in-law denounced him, and St. Paul, rather than remain where his faith was in danger, entered the barren desert, trusting that God would supply his wants.

And his confidence was rewarded; for on the spot to which Providence led him he found the fruit of the palm-tree for food, and its leaves for clothing, and the water of a spring for drink. His first design was to return to the world when the persecution was over; but, tasting great delights in prayer and penance, he remained the rest of his life, ninety years, in penance, prayer, and contemplation.

God revealed his existence to St. Antony, who sought him for three days. Seeing a thirsty she-wolf run through an opening in the rocks, Antony followed her to look for water, and found Paul. They knew each other at once, and praised God together. When St. Antony visited him, a raven brought him a loaf, and St. Paul said, “See how good God is! For sixty years this bird has brought me half a loaf every day; now thou art come, Christ has doubled the provision for His servants.” Having passed the night in prayer, at dawn of day Paul told Antony that he was about to die, and asked to be buried in the cloak given to Antony by St. Athanasius. Antony hastened to fetch it, and on his way back saw Paul rise to heaven in glory. He found his dead body kneeling as if in prayer, and two lions came and dug his grave. Paul died in his one hundred and thirteenth year.

Reflection.—We shall never repent of having trusted in God, for He cannot fail those who lean on Him; nor shall We ever trust in ourselves without being deceived.