Trending Now
You are at:Home»Featured»In the Absence of Fathers: A Story of Elephants and Men
By Fr. Gordon J. MacRae on July 20, 2012 Featured, Men, The Social Order 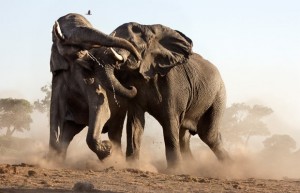 Wade Horn, Ph.D., President of the National Fatherhood Initiative, had an intriguing article entitled “Of Elephants and Men” in a recent issue of  Fatherhood Today magazine. I found Dr. Horn’s story about young elephants to be simply fascinating, and you will too.

Some years ago, officials at the Kruger National Park and game reserve in South Africa were faced with a growing elephant problem. The population of African elephants, once  endangered, had grown larger than the park could sustain. So measures had to be taken to thin the ranks. A plan was devised to relocate some of the elephants to other African game reserves. Being enormous creatures, elephants are not easily transported.  So a special harness was created to air-lift the elephants and fly them out of the park using helicopters.

The helicopters were up to the task, but, as it turned out, the harness wasn’t. It could handle the juvenile and adult female elephants, but not the huge African bull elephants. A quick solution had to be found, so a decision was made to leave the much larger bulls at Kruger and relocate only some of the female elephants and juvenile males.

The problem was solved. The herd was thinned out, and all was well at Kruger National Park. Sometime later, however, a strange problem surfaced at South Africa’s other game reserve, Pilanesburg National Park, the younger elephants’ new home.

Rangers at Pilanesburg began finding the dead bodies of endangered white rhinoceros. At  first, poachers were suspected, but the huge rhinos had not died of gunshot wounds, and their precious horns were left intact. The rhinos appeared to be killed violently, with deep puncture wounds. Not much in the wild can kill a rhino, so rangers set up hidden cameras throughout the park.

The result was shocking. The culprits turned out to be marauding bands of aggressive juvenile male elephants, the very elephants relocated from Kruger National Park a few years earlier. The young males were caught on camera chasing down the rhinos, knocking them over, and stomping and goring them to death with their tusks. The juvenile elephants were terrorizing other animals in the park as well. Such behavior was very rare among elephants. Something had gone terribly wrong.

Some of the park rangers settled on a theory. What had been missing from the relocated herd was the presence of the large dominant bulls that remained at Kruger. In natural circumstances, the adult bulls provide modeling behaviors for younger elephants, keeping them in line.

Juvenile male elephants, Dr. Horn pointed out, experience “musth,” a state of frenzy triggered by mating season and increases in testosterone. Normally, dominant bulls manage and contain the testosterone-induced frenzy in the younger males. Left without elephant modeling, the rangers theorized, the younger elephants were missing the civilizing influence of their elders as nature and pachyderm protocol intended.

To test the theory, the rangers constructed a bigger and stronger harness, then flew in some of the older bulls left behind at Kruger. Within weeks, the bizarre and violent behavior of the juvenile elephants stopped completely. The older bulls let them know that their behaviors were not elephant-like at all. In a short time, the younger elephants were following the older and more dominant bulls around while learning how to be elephants.

In his terrific article, “Of Elephants and Men,” Dr. Wade Horn went on to write of a story very similar to that of the elephants, though it happened not in Africa, but in New York’s Central Park. The story involved young men, not young elephants, but the details were eerily close. Groups of young men were caught on camera sexually harassing and robbing women and victimizing others in the park. Their herd mentality created a sort of frenzy that was both brazen and contagious. In broad daylight, they seemed to compete with each other, even laughing and mugging for the cameras as they assaulted and robbed passersby. It was not, in any sense of the term, the behavior of civilized men.

Appalled by these assaults, citizens demanded a stronger and more aggressive police presence. Dr. Horn asked a more probing question. “Where have all the fathers gone?” Simply increasing the presence of police everywhere a crime is possible might assuage some political pressure, but it does little to identify and solve the real social problem behind the brazen Central Park assaults. It was the very same problem that victimized rhinos in that park in Africa. The majority of the young men hanging around committing those crimes in Central Park grew up in homes without fathers present.

That is not an excuse. It is a social problem that has a direct correlation with their criminal behavior. They were not acting like men because their only experience of modeling the behaviors of men had been taught by their peers and not by their fathers. Those who did have fathers had absent fathers, clearly preoccupied with something other than being role models for their sons. Wherever those fathers were, they were not in Central Park.

Dr. Horn pointed out that simply replacing fathers with more police isn’t a solution. No matter how many police are hired and trained, they will quickly be outnumbered if they assume the task of both investigating crime and preventing crime. They will quickly be outnumbered because  presently in our culture, two out of every five young men are raised in fatherless homes, and that disparity is growing faster as traditional family systems break down throughout the Western world.

Real men protect the vulnerable, not assault them. Growing up having learned that most basic tenet of manhood is the job of fathers, not the police. Dr. Horn cited a quote from a young Daniel Patrick Moynihan written some forty years ago:

“From the wild Irish slums of the 19th Century Eastern Seaboard to the riot-torn suburbs of Los Angeles, there is one unmistakable lesson in American history:  A community that allows a large number of young men to grow up in broken homes, dominated by women, never acquiring any stable relationship to male authority, never acquiring any rational expectations for the future – that community asks for and gets chaos.”

It’s easy in the politically correct standards of today to dismiss such a quote as chauvinistic. But while we’re arguing that point, our society’s young men are being tossed away by the thousands into prison systems that swallow them up. Once in prison, this system is very hard to leave behind. The New Hampshire prison system just released a dismal report two weeks ago. Of 1,095 prisoners released in 2007, over 500 were back in prison by 2010.  Clearly, the loss of freedom does not compensate for the loss of fathers in managing the behavior of young men.

There is very little that happens in the punishment model of prison life that teaches a better way to a young man who has broken the law. The proof of that is all around us, but – especially in an election year – getting anyone to take a good hard look inside a prison seems impossible. We live in a disposable culture, and when our youth are a problem, we simply do what we do best. We dispose of them, sometimes forever. Anyone who believes that punishment, and nothing but punishment, is an effective deterrent of criminal behavior in the young is left to explain why our grotesquely expensive prisons have a 50 percent recidivism rate.

For a nation struggling with its racial inequities, the prison system is a racial disaster. Currently, young men of African-American and Latino descent comprise 30 percent of our population, but 60 percent of our prison population. But prison isn’t itself an issue that falls conveniently along racial divides.

New Hampshire, where I have spent the last eighteen years in prison, is one of the whitest states in the United States, and yet it is first in the nation not only in its Presidential Primary election, but in prison growth. Between 1980 and 2005, New Hampshire’s state population grew by 34 percent. In that same period, its prison population grew by a staggering 600 percent with no commensurate increase in crime rate.

In an election year, politicizing prisons is just counter-productive and nothing will ever really change. Albert R. Hunt of Bloomberg News had a recent op-ed piece in  The New York Times (”A Country of Inmates,” November 20, 2011) in which he decried the election year politics of prisons.

“This issue [of prison growth]almost never comes up with Republican presidential candidates; one of the few exceptions was a debate in September when audiences cheered the notion of executions in Texas.”

This may be so, but it’s the very sort of political blaming that undermines real serious and objective study of our national prison problem. I am not a Republican or a Democrat, but in fairness I should point out that the current Democratic governor of New Hampshire has but one plan for this State’s overcrowded and ever growing prison system: build a bigger prison somewhere. And as far as executions are concerned, the overwhelmingly Republican state Legislature in New Hampshire voted overwhelmingly to overturn the state’s death penalty ten years ago. Governor Jeanne Shaheen (now U.S. Senator Jeanne Shaheen), a Democrat, vetoed the repeal saying that this State “needs a death penalty.”

Eighty percent of the young men I have met in prison grew up in homes without fathers. The problem seems clear. When prisons and police replace fathers, chaos reigns, and promising young lives are sacrificed.

“Fathers” and “Fatherhood” are concepts with 1,932 direct references in the Old and New Testaments. Without a doubt, fatherhood has long been on the mind of God. In this election year, we could say that the absence of fathers is the elephant in the room.