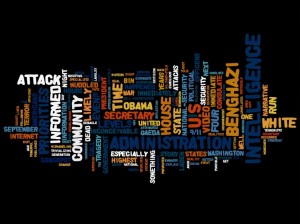 A generation ago, in the 1970s, the U.S. intelligence community possessed the technology to discern whether or not a U.S. consulate was under attack by terrorists or by rioters run amok. Moreover, no one in the community ever wanted a superior, especially at the highest levels, to point to an article in the Washington Post or something they saw on television and ask, “What’s this all about?”

I know this, because I lived it—at the time and in the military.

Every year, the White House publishes its National Security Strategy of the United States, setting the nation’s security agenda. From the start, the Obama administration erased the term “War on Terror” from the national-security lexicon. In recent months, the narrative has revolved around, “Bin Laden is dead and General Motors is alive,” establishing a false syllogism between two disparate and unrelated events nevertheless reflecting national-security priorities … as well as a muddled, uncertainty in priorities.

The attacks in Benghazi started late on the night of September 11. For Americans, the time difference between Washington and Libya put the attacks at the close of a day marked by remembrances for 9/11 victims.

It is inconceivable that the intelligence community, including watch officers at Langley, the Pentagon and in the White House, were unaware that the attack was a well-coordinated, military-style operation, one far more powerful and concentrated than the intrusion by a squad of Viet Cong commandos into the compound of the U.S. Embassy in Saigon at the onset of the Tet Offensive in 1968.

There are established intelligence protocols for passing information “up the line.” Watch officers surely contacted their immediate supervisors—even if it meant interrupting their evening—along with appropriate area specialists. The decision to continue the notification rests with officials at various levels, so it is not inconceivable that the president of the United States would not be informed immediately of such an attack. It’s quite likely that his national security advisor and Secretary of State Clinton were informed. The claim of “evincible ignorance” involves a two-edge sword. While the highest levels of the U.S. government may have been uninformed at 7:00 p.m. on the night of September 11, a dozen hours later analysts should have had time to sift through the “fog of war” with a good approximation of what happened and who was behind it.

This is where the story gets muddled. A riot in Cairo on 9/11, attributable to an obscure internet video publicized for political purposes by the Muslim Brotherhood government in Egypt, made for a quick and convenient cover story to explain the tragedy in Benghazi. It also fit the political narrative that with Bin Laden dead, al Qaeda was “on the run.” Tragedy in Benghazi notwithstanding, it was time to get on with the main focus of the Obama administration, ensuring another four years to affect change, hopefully for the better—something that eluded the administration in its first four years.

The video scapegoat worked well, given that if it didn’t emanate from a crackpot right-winger with Tea Party sympathies, it probably did issue from a crackpot who by extension or implication reflects the kind of injudicious and inconvenient opinions the administration attributes to its opponents. That the Republican candidate Mitt Romney dared to criticize the administration in the wake of a tragedy costing the lives of four Americans offered the opportunity for trivializing criticism, especially when the root cause might be pinned on an internet video.

The intelligence community knew what happened in Benghazi. While it’s possible President Obama wasn’t immediately informed, it’s less likely the secretary of state was not told as soon as Ambassador Chris Stevens’ fate was known. Only the most egregious mishandling of intelligence would have prevented the president from getting the right information at the next briefing, which should have occurred the following morning, almost 12 hours after the event.

It comes down to a matter of priorities. Clearly, this administration’s reluctance to deal with the realities of Islamist fundamentalist terrorism, even under the admittedly weak description of a “War on Terror,” and its insistence that “al Qaeda is on the run,” reflect a denial of reality. The White House reaction to the Benghazi debacle is amateurish at best.