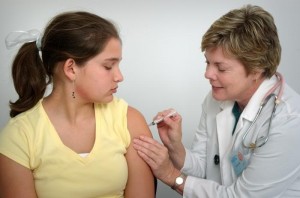 Gardasil has been controversial from the beginning. While other vaccines protect against diseases spread by casual contact, Gardasil was developed to protect against a sexually transmitted disease called Human Papilloma Virus or HPV. Merck & Co., the manufacturer, has been very effective at lobbying governments around the world to make the vaccine mandatory for school attendance. Despite the frequent objections of doctors and parents, it has been administered to tens of millions of 11- and 12-year-old young girls around the world.

Now comes the case of a 16-year-old Australian girl who suffered “premature ovarian failure” after receiving Gardasil. Her ovaries have shut down, her eggs have been destroyed, and she will never be able to have children.

Dr. Deirdre Little, the Australian physician who treated the girl, has published a complete account in the British Medical Journal. (BMJ Case Reports 2012; doi:10.1136/bcr-2012-006879) Her report explains that the girl’s menstrual cycles were regular until she received the Gardasil vaccination in the Fall of 2008. By January 2009, her cycle had become irregular. Over the course of the next two years, her menses became increasingly scant and irregular, until by 2011, she had ceased menstruating altogether.

Early menopause is highly unusual. In this case, the girl was in excellent health, and had no family or personal medical history that could explain this premature menopause. Her first effort to obtain medical assistance for her amenorrhoea resulted in the doctor advising her to take oral contraceptives. Had she agreed, such drugs would have masked the problem and most likely the possible cause as well. But she declined.

It should be noted that many young girls are told, as she was, to take oral contraceptives as an antidote to what is called in the medical field, oligomenorrhoea, which means infrequent or very light menstruation. Most probably take their physician’s advice, which means that there may be many more cases of “premature ovarian failure” than we now know, since the contraceptives mask the symptoms.

In the Australian case, after testing the levels of numerous hormones, and the function of various internal organs, the girl was diagnosed by Dr. Little as having “premature ovarian failure”, which is defined as “the presence of menopausal gonadotrophin levels in association with over 3 months of amenorrhoea or oligomenorrhoea before age 40 years.” Further testing confirmed that all of her eggs—every last one—were dead. She was and is totally and irrevocably infertile.

This case was reported to the local vaccine manufacturer in Australia, called the Therapeutic Goods Administration, to find out what they knew about the vaccine’s effect on a woman’s reproductive system. Very little, it turned out. The TGA had records of various tests on rat testes, but no records of the effect of the vaccine on rat ovaries.

It is very rare for a healthy 16-year-old girl to go through menopause. It is also a personal tragedy of the first order, one that will only grow in magnitude as she marries and yearns to start a family.

While Dr. Little could not confirm that Gardasil caused the destruction of the girl’s reproductive system, she was able to rule out all other possible causes. The circumstantial evidence implicating Gardasil is strong.

The world has just celebrated what the U.N. has designated as the “International Day of the Girl Child.” In the resolution announcing this day last December, the General Assembly stated that it “Invites all Member States, relevant organizations of the United Nations system and other international organizations, as well as civil society, to observe the International Day of the Girl Child, and to raise awareness of the situation of girls around the world.” (emphasis added) The resolution talks of empowering women, enabling them to make decisions, supporting them, recognizing their human rights, and ending discrimination.

Tens of millions of young girls have received the Gardasil vaccine since its approval by the FDA six years ago. If even a tiny fraction of them have experienced infertility as a result, then these “girl children” have been denied a very fundamental right, that is, the right to decide how many children they want to have.

In the case of the Australian girl the effect is irreversible. She has lost an integral part of her womanhood, while still but a child. Women deserve better.