Trending Now
You are at:Home»Featured»Iraqi Christians Rejoice Over Liberation of Qaraqosh
By ACN-USA News on October 21, 2016 Featured, Those in Need 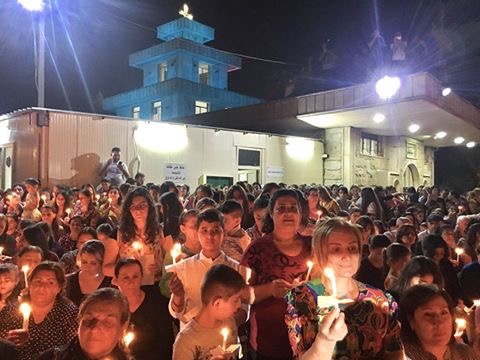 NEW YORK (Oct. 19, 2016)—Qaraqosh, a formerly major Christian town on Iraq’s Nineveh Plain has been liberated as part of the campaign to liberate Mosul, Iraq’s largest city. Before ISIS overran the Plane in the summer of 2014, Qaraqosh, which is also knows Baghdida, had a population of 50,000, the great majority of them Christian. The city has 10 churches. All of the inhabitants fled to Kurdish Iraq—and are now beginning to dream of a return to their homes.

Speaking from exile in France, Aded, who lost a son and nephew when ISIS attacked the city, said: “Today all the Christians who used to live in this area are very happy, yet we are worried about the future. People are afraid to return to their homes, and as long as there are no international forces to protect them, they will not return.”

Newly ordained Chaldean priest Father Martin Baani, speaking from Baghad with international Catholic charity Aid to the Church in Need (CAN), said: “The first thing I want to do is to give thanks to God. I am so happy. I always believed it would happen one day, but I almost cannot wait to see the town. When I heard the news, I thought: good has triumphed over evil. God does not want to see his people still more unhappy; he wants us to be happy. We are very happy, and we are praying to be able to return to our homes one day. Now the eyes of the whole world are on Mosul.”

Chaldean Catholic Patriarch Rafael Louis Sako I spoke from Berlin: “I hope the liberation of Mosul and the Nineveh plain that has started can be successful. This is a sign of hope for all of us. After the liberation and the end of these conflicts, the Western governments involved should assist the refugees in returning to their homes; securing areas of conflict; providing full protection for them; restoring their rights and properties; contributing to the reconstruction of towns and cities; compensating the resulted damages and helping the restoration of the cultural and religious heritage of all its components.”

George Marlin, Chairman of ACNUSA, said: “This is a great beginning of the battle to oust ISIS from Iraq—and ultimately Syria—altogether. But we must be patient and be prepared for the huge challenge of making it possible for Christians to return to their homes and to guarantee their security for the long term. One thing is certain: Aid to the Church in Need will do everything possible to continue to help them.”

Since 2014, ACN has provided more than $24M million in aid for the Christians of Iraq, supplying emergency aid and funding projects for education, food and shelter for the refugees.