Trending Now
You are at:Home»Featured»Is NFP Crazy?
By Lauren Meyers on May 20, 2013 Featured, Marriage 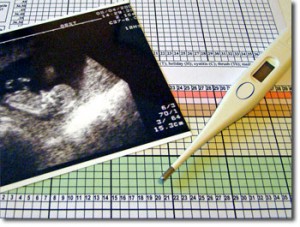 Well, thanks for your kindness and tolerance in regards to my way of life.

We hear a lot about tolerance and accepting others nowadays, but this is usually the response I get from people when I tell them that my husband and I don’t use contraception. Let me tell you, I love when people ask the contraception question, get the answer, then respond with discouraging and hurtful words. After the scoffs, comments, and eye rolls, the line, “You’re crazy” always seems to be the icing on the cake. It’s the perfect way in which someone can write me off, disregard my opinion, and turn up their nose up at my faith.

Sometimes I’m tempted to haul off on whomever I’m talking to and tell them that I’m not crazy, but they are! For the sake of charity, the lack of time, and sometimes the lack of quickness and wit, I will usually smile, shrug, and go about my business. The “You’re Crazy” line has always stuck with me, though. So, for the sake of airing my grievances, here are some of the choicest remarks I’ve received over the years, along with some of the things which I wish I could have said.

“You’ll change. You’ll see.”
Will I? Really? You know what, I hope that I do change. I hope that practicing NFP will help make me a more selfless person. I hope that the sacrifice of sexual intimacy in the times we are avoiding conception will help me love my husband in new ways. I hope that it will make me more grateful and more in awe of the gifts of sexuality, fertility, and my marriage. You’re totally right, I will change.

“Like that will work.”
You know, I think it will. It’s been proven 99% effective for couples avoiding conception, and we haven’t had any surprise yet. So, no worries here.

“Not having sex with your husband? Well, that’s just unnatural.”
Unnatural? Really? NFP is unnatural, but putting synthetic hormones into my body for the sake of altering it’s already healthy and natural functions is just fine? Should I go spend the extra money on organic chicken, then come home and take my birth control pills? Wait a minute, if not having sex is unnatural, that means we’re in an unnatural state right now! Quick! I better call my husband and get home right away! Bye!

“Do you ever have sex?”
Uh, yes. Yes we do. We have better sex, actually. Those who use hormonal birth control, which is one of the most popular methods of birth control in the US, report less frequent sex and lower sexual satisfaction. Condom users also reported that they stopped use of the condom due to a decrease in sexual pleasure for both partners. NFP users, on the other hand, get a mini honeymoon every cycle. It’s pretty awesome.

“What about your husband? Is he OK with this?”
Is he OK with it? Why wouldn’t he be? Oh, because you think that men are slaves to their biological urges and we as women have to be there to satisfy each and every one of them? Or at least most of them? Wow. That’s really insulting, for him and for me. But, to answer your question: yes, my husband is OK with it. In fact, he thinks it’s great. Know why? It’s because he loves me too much to ask me to risk the harmful possible side effects of the pill. Also, he loves me so much that he wants to stay married to me for the rest of his life, and NFP nurtures the virtues of selflessness, patience, and self control – the building blocks of lasting marriage. He wants to sacrifice for me, to respect me, to protect my dignity and personhood in it’s entirety. That includes being in awe of my fertility, not asking me to suppress it for his or even my own convenience. Actually, you should ask him this question. Trust me, he’ll talk to you about it for hours.

“Talk to me after your tenth baby.”
You know how many kids I’m going to have? Wow, thanks for letting me know. Also, why are you saying that like it’s a bad thing? I have two kids and they are the greatest gifts I’ve ever been given. Oh, you mean kids can be annoying since they cry, wake up at night, cost money, and require time and effort among other things. Well, you’re right with that one. When I became a parent I had to give up a lot of free time and learn to put someone else first, even when they couldn’t do anything in return. Funny, I wouldn’t say that’s a bad thing. I would call that the definition of virtue. Having kids surely didn’t make me a better person, but it sure has encouraged me.

Phew. It felt good to get that all out there.

Maybe you think I’m being a little too snarky and unfair, but please forgive me. One can only be called crazy so many times before she has to defend herself. Thinking about it, though, maybe I shouldn’t get so hung up on this “crazy” comment that people keep making.

I mean, how many times did people think and say that Jesus was crazy? He asked the apostles to literally drop their work and their lives and follow him. He said that we have to eat his flesh and blood. He said that he would return to the earth on a cloud at the end of time. I mean, people wanted to push him off a cliff for the “crazy” things he said, and later they ended up crucifying him for them. I think today we have a tendency to try and put Jesus into a place that makes us feel comfortable. We call him a great teacher and preacher, someone who loved everyone, and always tried to do the nice thing. But Jesus was not just those things. He was radical. He was counter cultural. He asked people to step outside of their comfort zones. He called them to change their lives and he turned everything they thought they knew upside down. And what did he offer them if they laid down everything and followed him? He offered joy. He offered hope. He offered unconditional love.

This article originally appeared on Ignitum.com and is used with permission.