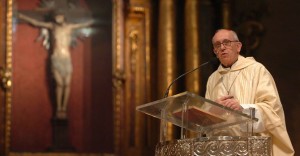 Pro-lifers held their breath the day the world received a new Pope. They did not question his pro-life credentials but wondered if he would speak forcefully.

An old quote soon surfaced and concerns faded. “Defend the unborn against abortion even if they persecute you, calumniate you, set traps for you, take you to court or kill you. No child should be deprived of the right to be born, the right to be fed, the right to go to school.”

This June the Pope also will play a central role in the Vatican’s annual celebration of the Gospel of Life, the papal teaching published by Pope John Paul II in 1995. His successor, Benedict XVI, started the annual celebration a few years ago that features a papal mass for pro-life leaders. The new Pontifical Council for the New Evangelization, established by Benedict to encourage a reawakening of the faith in traditionally Christian countries, leads an expanded celebration this year.

This year’s three-day celebration begins with a conference funded by C-FAM and led by its chairman, Douglas A. Sylva. Cardinal Raymond Burke will deliver the keynote address on the Gospel of Life and the New Evangelization. Dr. Robert Royal of the Faith and Reason Institute and Dr. Francis Beckwith of Baylor University will answer Burke’s keynote address.

Unlike Protestant and even Evangelical denominations, the Catholic Church has not waivered on the question of abortion or other life issues. The Church sees an inextricable link between its central evangelical mission and the life.

On Saturday morning pro-life pilgrims will gather around Rome and proceed to the tomb of St. Peter. Churches near the Vatican will host an afternoon of Eucharistic adoration followed by a prayer vigil and candlelight procession led by American Archbishop Augustine DeNoia, head of the Vatican Congregation for Divine Worship. The procession ends near the Vatican where some think Pope Francis will greet the crowd. Surprising many, Francis visited the Roman March for Life.

On Sunday, June 16, Pope Francis will celebrate a Mass for Life in St. Peter’s Square.

A number of Americans have helped plan this event including representatives from Priests for Life, the Pro-Life Secretariat of the US Conference of Catholic Bishops, Alliance Defending Freedom, Susan B. Anthony List, Students for Life of America, LiveAction, and Americans United for Life.

Besides the conference for English speakers, there will be events in other languages with many attendees expected from Europe.

The Pope’s commitment to life issues cannot be underestimated. He sets the tone of the church and while many bishops and priests shy from the life issues, they find that more difficult if the Pope assertively leads the way.

Pope Francis continues to express strong pro-life views. Besides appearing unexpectedly at the Rome March for Life, he tweeted this week: ”It is God who gives life. Let us respect and love human life, especially vulnerable life in a mother’s womb.”