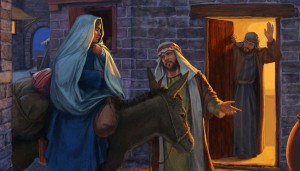 At this time of year we frequently see a clash between the secular and the religious. We hear arguments that make many of us cringe while others rub their hands together with joy, pleased with the debate they have again provoked.

For instance, we hear from those like Bill O’Reilly that Christmas was declared a federal holiday by President Grant in 1870: “Since Christmas was loved by almost everyone, the national holiday became a symbol of healing and unity.”

On the other side of the aisle, we hear from secular groups—atheists, agnostics, skeptics, humanists, freethinkers, and so on—who want a celebration of solstice and prefer to deny that Christmas is anything other than a special day when people get a day off with pay.

If this sounds a bit like children arguing over whether or not Santa has a beard, then you understand why some of us don’t buy in to the public debate at all.

For us, the meaning of Christmas resonates in our hearts because we know, as Archbishop Fulton J. Sheen once said, that, “There are two births of Christ. One unto this world in Bethlehem, the other in the soul when it is spiritually reborn . . . both result from a kind of divine invasion.”

In other words, our embrace of the divine truth of Christ, Son of God made man, supersedes any explanation one might find on the nightly news, in a newspaper, or on the Internet. If a person does not feel Christ in his soul and recognize Him in life itself, then the debates in the public square are sufficient. And when we encounter a person in that state of mind, we must pray for them.

For those of us who are Christian and committed to defending human beings and their dignity from creation to death, Christmas has yet another meaning. It is a season of celebrating life as a gift from God, a blessing in our midst, and a miracle that shows us just how much God loves the world.

Blessed John Paul II wrote: “The life which God gives man is quite different from the life of all other living creatures, inasmuch as man, although formed from the dust of the earth . . . is a manifestation of God in the world, a sign of his presence, a trace of his glory. . . . Man has been given a sublime dignity, based on the intimate bond which unites him to his Creator: In man there shines forth a reflection of God himself.”

Christmas provides us with the golden opportunity to celebrate the birth of our King. At the same time, we renew our fundamental understanding that we strive to end lethal violence perpetrated against innocent human beings because each of them is a reflection of God Himself.

During these 12 days of Christmas that culminate in the Epiphany, we must promise to spend more time praising God and thanking Him for the many blessings He has given us. We must also pray for all those who are on a journey toward Christ, especially those who have rejected His love.

On this sacred day, we gather together and look into the crèche, gazing at the baby who lies therein, recalling that our Savior and King came into the world by way of a stable. We ponder the image created by Archbishop Fulton J. Sheen’s profound words:

There was no room in the inn but there was room in the stable. The inn was the gathering place of public opinion, the focal point of the world’s moods, the rendezvous of the worldly, the rallying place of the popular and the successful. But there’s no room in the place where the world gathers. The stable is a place for outcasts, the ignored, and the forgotten. The worldly might have expected the Son of God to be born in an inn; a stable would certainly be the last place in the world where one would look for him. The lesson is: Divinity is always where you least expect to find it.

Have yourself a very blessed Christmas.