Trending Now
You are at:Home»Featured»It Is Time To Privatize Christmas
By Luke Hamilton on December 23, 2013 Featured, The Social Order 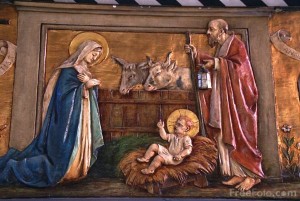 Why do we fight to foist Christmas on a public which grows more disinterested each year? Do we seek our own Miracle on 34th Street, where a legal loophole preserves the right to acknowledge the supposedly-imaginary as real? What is the objective of this campaign which gets trotted out, year after year? If you ask me, the effort is misguided and misspent. If the goal is forcing the trappings of religion on the unwilling and unworthy, then I say “Carry on”. But if the goal is reaching the lost with the life-changing message about the arrival of a holy Redeemer who lived and died among us, for us, we are wasting our breath and losing our audience.

One of the most intriguing aspects of the person of Christ is that He polarizes, attracts, and divides like no one else ever born. As C.S. Lewis famously stated in Mere Christianity,

A man who was merely a man and said the sort of things Jesus said would not be a great moral teacher. He would either be a lunatic – on the level with the man who says he is a poached egg – or else he would be the Devil of Hell. You must make your choice. Either this man was, and is, the Son of God, or else a madman or something worse.

So why do we often act as if we’re fighting for the right to celebrate the birth of a great moral teacher instead of the Son of God? Why do we seek the approbation of a government and mercantile class which shuns His truth? Personally, I think it’s time to shake the dust of Godless Christmas from our sandals and hit the road.

It’s time to privatize Christmas. No more squabbling for the scraps under the table of an increasingly apathetic culture. You can keep your Happy Holiday wishes at the Culturally-Neutral Year-End Festival, I’ll be celebrating the birth of mankind’s Savior; and if I have to do it outside of government institutions, I will cheerfully do so. But don’t blame me if my rocking Christmas celebration outdoes your Winter Tolerance SuckFest. If the big kids won’t let us play in the game, why do we sob on the sidelines until someone’s mom makes them put us in for a play? Seems to me, the conservative solution would be to go start our own game at another playground. If our game is worthwhile, it’ll soon be more popular than the one from which we were banned.

Your kids’ school won’t allow Christmas carols to be sung at their Winter Celebration? Why fight that battle on their turf? Put together your own concert and draw an audience of people who would rather be singing about Christ. Contact local congregations and schedule a Christmas concert on the same night Saul Alinski Elementary has scheduled their December Commemoration of Social-Tradition Equivalence. I bet you can even find local businesses, willing to sponsor a snack table in exchange for free advertising. Personally, I’d rather do some Christmas shopping at a local business which is proud to acknowledge the reason for the season than support a retailer who had to be strong-armed into letting their cashiers blurt out the C-word to their customers.

The worry seems to be that if we stop fighting the “war on Christmas” then the birth of our Lord will be overwhelmed by commercialism and secularism. Didn’t we arrive at that bus-stop a few generations ago? During a recent tour of a fully-restored 19th century Wisconsin village I visited, our tour guide mentioned that many of the villagers made every effort to maintain a simple celebration of Christmas, as they felt that the holiday had become “too commercialized”. Fast-forward 143 years to our day when cultural authorities have deemed Rudolph and Santa Claus symbols of Christianity, calling for their expulsion. Is it safe to say that the lines have been overrun, lieutenant?

At what point does it behoove us to stop beating a dead horse and go find a new one which will get us where we’re going? When sending His disciples out into the world to spread the gospel, the Lord gave them instructions how to deal with those who refused His message. He didn’t tell them to force a hearing, He said to offer it freely and walk away if they reject you. Why? Because He knew that His person and message would draw those whom it would draw. He also knew the hardness of men’s hearts and the stubborn defiance which could prevail there. Why should it be any different today, when the world has turned further from God and the mocking laughter rings more loudly? The light of God’s gospel shines in this world, to draw the lost who are seeking Him and condemn those who choose to remain in darkness. If Christmas is banned, so be it. It could be the best thing to happen to Christmas in years.