Trending Now
You are at:Home»Featured»IVF and the ‘Right’ to be a Parent: the Child as an Expensive Lifestyle Accessory
By Hilary White on April 27, 2012 Featured, Reproductive Technology 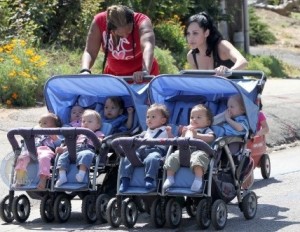 One thing has become abundantly clear since the development of a global, multi-billion dollar artificial procreation industry: children are now regarded as luxury commodities, very expensive ones, and they had better measure up to the expectations of customers. This assumption was bolstered the other day with the announcement in the UK from the Human Fertilisation and Embryology Authority (HFEA) that the numbers of single women and lesbians receiving IVF treatment has tripled in the last five years.

Some years ago, I was launched into the pro-life movement when I took an interest in the ethics and debates surrounding what were then still called the New Reproductive Technologies, in vitro fertilisation, artificial insemination etc. At the time, 2002 or so, the Canadian government was considering legislation to regulate the activities already ongoing in labs across the country, and I was put in charge of organizing the fight at Campaign Life Coalition against that insidious bill.

I won’t go into the details of that long battle, but suffice to say that we lost, resoundingly. All the efforts of the national pro-life lobby could not crack the determination of the very powerful and wealthy industry, and, as usual, their helpers in the media, to ensure that the billion dollar artificial procreation business was well protected in Canadian law. That the precise same pieces of legislation were being produced in nearly every other country in the west at the time, with precisely the same wording, was not lost on us. IVF and related activities are a gigantic global industry based on one mistaken, and deadly, philosophical assumption: that there is such a thing as a “right” to be a parent.

The failure to mitigate the damage of that bill was a disaster for Canadian society because it contributed mightily to a terrifying shift in the basic understanding of one of the foundational institutions of any human society: the relationship between parents and children. During that period, a massive paradigm change was undertaken in Canadian society, indeed, in nearly every society in the western world, from the presumption that the child is a gift, given into the care of a family, to the concept that the child is an object upon which individuals exercise their “right to parenthood”.

With the advent of human control over fertility, first with the Pill and legalised abortion, and now with IVF clinics serving as expensive baby boutiques, we have changed that basic paradigm to focus solely on the desires of the parents. All our notions of sex, parenthood and family are now permanently wedded to our personal physical and emotional self-gratification. In other words, we now have both child-proof sex and manufactured children in order to satisfy our various desires for personal fulfillment. It is the final achievement of the sexual revolutionaries: the reduction of persons to the status of things.

Since the global legalisation of artificial procreation techniques, this terrifying shift has become manifest again and again in laws and regulations around the world. The news from the HFEA is only the latest demonstration.

The Christian Institute recalls that in 2008, this government regulator changed the rules on IVF, removing the requirement for clinics to “consider the child’s need for a father” before granting access to IVF, focusing instead on the need to show the availability of “supportive parenting”.

Andrea Minichiello Williams, CEO of Christian Concern, an Evangelical lobby group, said, “All of the evidence shows that children prosper the most when they have a married mother and a father. Government policy needs to recognise the importance of the role of fathers and of stable marriages.”

But what we have to understand as pro-life and pro-family people, is that these studies are meaningless under the new paradigm. The priority is not the needs of children. Our society has definitively accepted (in Canada, explicitly in the law) that children are, essentially, not persons. Traditionally, in law a person is something that is protected for his own sake, who has rights of his own and who cannot be bought or sold or killed; as opposed to a thing that is protected only for the sake of others and that can be killed on a whim.

With the advent of legalised abortion, a child can be killed at the whim of the mother, reducing him to the legal status of a chattel object; at best, a lower ranking person, whose needs are always superseded by the needs, rights and even desires of adults. The acceptance and legalisation of artificial procreation simply takes the logic to its next step, saying that a thing that can be destroyed at will can now also be manufactured at will.

This is why it is irrelevant to the HFEA that children genuinely need two parents to thrive. Single women and lesbians, they believe, have a “right to be parents” and this right takes precedent over any other consideration. That this change has dramatically increased the customer base for the IVF industry seems to have gone unnoticed, or at least unmentioned, by the people making the laws.

While we were fighting the Canadian legislation, the main gist of the pro-life argument was that it would tend to create precisely this new outlook toward children. We treat commodities completely differently from the way we treat a dependent person for whom we have responsibility. A luxury good exists for the customer. It must meet the customer’s specifications and if it does not, it can, and ought to be discarded and exchanged for another. This is certainly reflected in IVF, including the creation and selection of many embryos, the concept of “selective reduction” in which “extra” children are aborted and many other common practices of the trade.

Some years before the legislation passed, CBC taped a program on IVF highlighting the campaign of a group of would-be parents to get the national health service to pay for their IVF treatments. During that interview one of the campaigners said, “We have a right to be parents”. It was the first time this was publicly articulated so bluntly, but the CBC interviewer did not make the next point, that if there is such a things as a right be a parent, there must, by definition, be a right to have a child. Not the right, mind you, to do the things that people have always done that may result in a child, but a right to the child himself, to acquire him.

It only stands to reason therefore, that it would be a short jump to making sure the child is the right sort in terms of sex and in good condition in terms of freedom from disease or deformity. If you are going to spend $10,000 a pop on buying this very expensive commodity, to which you have this putative “right,” you also have a right to get a good one. One that is not defective, and will fulfill the purpose of the transaction.

People can be confused by the objection of the pro-life movement, and the Catholic Church, to IVF. Isn’t the whole point that we want people to have babies?

Actually no. What we want is for the laws to treat babies like people. IVF is merely the next step in a long progression of massive societal changes, fundamental changes in our outlook, that reduce babies, and by extension all people, to the status of things.

When we made these arguments in Parliament, perhaps due to the massive change in outlook that had already occurred 30 years before with legalised abortion, we were shouted down. The idea that children could be “commodified” was absurd, ridiculous.

We were told that we were standing in the way of progress, that IVF would be the solution to the terrible suffering of infertility. It was even suggested that IVF could solve the looming population crisis. The Church leaders, even those who were with us in principle, mostly shrugged, saying that the practises were ongoing already and at least the legislation would “regulate” them. And besides, we were assured, once the law is in place, it can be amended, improved, as the situation and the science advances.

Now, ten years on, we have selective reduction, “wrongful birth” lawsuits, sex-selection, and eugenic screening of “designer babies”. The concept of the child as an expensive lifestyle accessory is cemented in the global consciousness in the west.