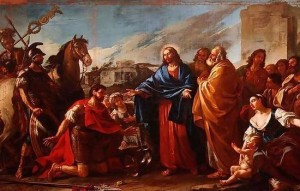 Do you ever want simply to “be better” from something … from any thing?

It could be something that ails you, such as cancer or diabetes or endometriosis, heart disease or asthma or some other chronic health condition. It could be an addiction – to smoking or drinking alcohol, drugs or food or pornography. It could be a mental illness, such as chronic depression or severe anxiety, bipolar disease or an eating disorder.

It could be a serious financial crisis or family discord. It could be a rift in an important friendship. It could be a spiritual crisis – difficulty in believing something about God, trusting God, or a certain serious sin that has become a habit.

Whatever the concern, it makes life less enjoyable and more like a chore – for you and perhaps for those you love. You have visited the doctors, taken the medication, undergone the recommended treatments. You have tried therapy, changed your diet, exercised. You have met with a priest or minister. You have prayed and asked people to pray for you.

Have you given up hope?

It’s understandable if you have. That’s what most people in your situation do. Actually, it might be less that they give up hope than that they accept the situation. They might reach a place where it’s just assumed the chronic disease will show up again and take its usual toll. Or that they aren’t strong enough to fight the addiction, so they don’t even try any more. Or they give up looking for a better job or a suitable mate.

Or the sin. “God can’t love me like this,” they might say. So they give up faith, in everyone and everything.

I have four “Jesus stories” for you. Please, stick with me.

Each of these stories is about prayer, about appealing to Jesus for something no one else could provide.

Have you ever asked for such healing, for a cure?

In one way or another, each story was about people doing what Jesus said we all can do: “Ask and it will be given to you; seek and you will find; knock and the door will be opened to you.”

We can ask – for ourselves or others – and seek and knock. We can do that in prayer. We can have hope and, what’s more, should have hope for healing. It’s about having faith, believing that when you ask for something, not only you will definitely receive an answer from God but there can be healing.

And if you ask with the belief that God can do anything He wants and might grant you healing – you might be healed. Of course, a prayer for healing doesn’t mean you stop taking medication or receiving chemotherapy or visiting your therapist. It might be through those things that God heals.

Keep your mind and heart open to one possible healing: That God doesn’t eliminate the affliction but heals your heart and soul to accept the affliction with joy. Indeed, faithfulness and trust can create the kind of hope we most need.

Life will then be better. And we can give glory to God.