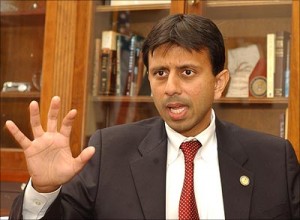 It is reported that Louisiana governor Bobby Jindal is a Catholic. Further, it has been said that he is a conservative Republican.

But recently we learned that Jindal is actually a counterfeit Catholic with progressive leanings on the subjects of contraception, women’s rights, and common sense.

In fact, in his latest Wall Street Journal op-ed, which supports the American College of Obstetricians and Gynecologists’ call for over-the-counter birth control, Jindal writes without apology:

As a conservative Republican, I believe that we have been stupid to let the Democrats demagogue the contraceptives issue and pretend, during debates about healthcare insurance, that Republicans are somehow against birth control. It’s a disingenuous political argument they make.

As an unapologetic pro-life Republican, I also believe that every adult (18 years old and over) who wants contraception should be able to purchase it. But anyone who has a religious objection to contraception should not be forced by government healthcare edicts to purchase it for others. And parents who believe, as I do, that their teenage children shouldn’t be involved with sex at all do not deserve ridicule.

In other words, as a “pro-life” Republican, Jindal supports chemical abortion. How? It is a scientific fact that one of the proven modes of action of the birth control pill is early abortion. Further, the governor supports the freedom of anyone over the age of 18—apparently married or single—who wishes to use contraception to do so as long as those who have religious objections do not have to subsidize it.

But wait a minute. Something is terribly wrong with this picture.

First, let me be clear. No law is ever going to ban genuine contraception—contraception that does not act to abort or have the possibility of aborting. Such a definition does not include the pill, for the pill can cause an early abortion. Thus, at the very least, Jindal should either get his facts straight or stop describing himself as pro-life.

Second, as a Catholic, Jindal should be using his bully pulpit to help Americans understand the truth about these matters rather than attempting to placate his fellow squishes by doing all he can to obliterate facts and evidence from the public debate. Politics aside, the pill harms women; in fact many have even died. His argument, though music to the ears of the culture of death, merely sows more seeds of disinformation where honesty is so badly needed.

Third and most important, the politics of contraception have become the endgame for those quasi-Catholics in political life who do not wish to “mess up” their careers by being consistently Catholic when they address public policy questions dealing with reproductive health—including in vitro fertilization, contraception, and abortion. This is why Jindal’s latest comments received rave reviews from Planned Parenthood.

The Archdiocese of New Orleans, on the other hand, questioned the governor’s statements saying, “We disagree with the governor’s opinion because, as the Catholic Church teaches, contraception is always wrong.”

And that’s the rub. There are facts and there is opinion; there is truth and there is falsehood; there is right and there is wrong. But none of this applies when Catholics in public life defy Catholic teaching as the Catholics bishops look on. The governor is misguided and the archdiocese should have been blunt in its criticism. The archdiocese could have used the Jindal incident as a teaching moment, but instead it stopped short.

As long as Catholics in public life are creating confusion with the apparent permission of the bishops, we are going to see a continuing de-escalation of respect for all that the Church teaches. And while it is clear that many in the Church strive to deconstruct her teaching and water down her truth, there are an equal number of us who will go to our death before we will keep quiet in our defense of Christ and His truth.