Trending Now
You are at:Home»Featured»What Are We Missing?
By Ron Quinlan on December 19, 2012 Featured, Live in Christ 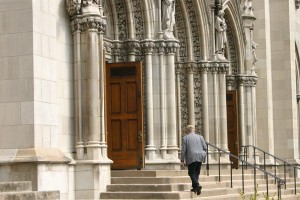 We belong to a faith that over the course of the past two millennia hundreds of thousands, if not millions, of people have given their lives for.  These martyrs believed that their faith was worth dying for yet this generation of Catholics seems to have abandoned their faith.  With the exceptions of Christmas, Ash Wednesday, Palm Sunday and Easter, we’re lucky if 40% of American Catholics attend mass.  In Europe it is far worse.  In France less than 5% attend Sunday mass.

This raises the question.  What are we missing?  We have the same faith that St. Stephen, St. Peter, St. Andrew and St. James died for.  This is the same faith that St. Thomas More and the martyrs of England died for.  Century after century Catholics have given up their lives rather than abandon their faith, wealthy and educated Catholics as well as the poor, all classes of people, all ranks of society, all levels of education, even high ranking politicians.  Yet this generation seems to have abandoned their faith for the sake of convenience.  We have to ask ourselves what it is that we are missing that the martyrs knew.  What was it that made them willing to give up their lives rather than give up their faith?  What would make them risk execution rather than miss the opportunity to go to mass?

Could it be that we don’t really understand our faith?  Have we missed the fact that our faith is about a relationship with the God of Infinite Love, who loved us so much, wanted a relationship with us so badly He came to earth as a baby, being born in a smelly drafty stable.  It is about a God who loves us so passionately He came to earth to live in poverty in a backwater province long before the invention of air conditioning, central heating, and indoor plumbing.  He chose to live inPalestine knowing He would be rejected and executed on the Cross, the most painful form of execution ever invented.

He came knowing that many of us would reject His love and prefer the lies of the modern world.  He chose to die for us despite the fact that He knew every vile, selfish sin we would ever commit.  Do we really understand how much He loves us?

God wants a better life for us than the world offers, better than we can ever imagine and He gave us the Commandments to protect us from the pain and bitterness caused by sin.  He longs to heal and restore us. He ardently wants to forgive our sins and set us free from all that holds us down.

Jesus loved us so much He could not bear to leave us alone.  He created the Church and the Sacraments just so He could be there for us.  He waits for us day after day in the Tabernacle yearning to spend time with us, to bless us if only we’d open our hearts to Him.  He created the Sacrament of Reconciliation so that we would know all is not lost if we fall but that we could always come back to Him and He would forgive us no matter how far we fell.  He longs to guide us, to protect us and lead us to heaven.

He fervently longs for us to come home to Him and His Church.

I challenge you to take another look at your faith.  If it is a faith that millions through the ages have found worth dying for — and it is — then shouldn’t you ask yourself “What have I missed? What was it they  knew that they were willing to give up everything?”