Trending Now
You are at:Home»Featured»Jordan Church Struggles to Accommodate Refugees, Shield Youth from Extremism
By ACN-USA News on January 2, 2015 Featured, Those in Need 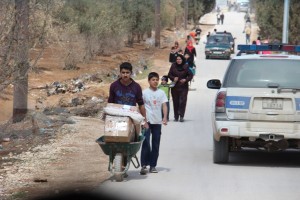 For years now, the Hashemite Kingdom of Jordan has been a haven for refugees from Iraq. However, a critical limit is in view as the country is also forced to accommodate a huge, and growing, influx of refugees fleeing ongoing war and violence in Syria. Along with Lebanon, the country is threatened by chaos as hundreds of thousands of both Christians and Muslims from both Syria and Iraq threaten to swamp Jordan’s capacity to cope with the newcomers.

“Many Christians have lost everything but they have not given up their faith,” said Father Rifat Bader. The Catholic priest works as a pastor in Jordan, but doubles as media and public relations official on behalf of the Latin Patriarchate of Jerusalem, whose jurisdiction comprises Israel, Jordan, Palestine and Cyprus.

“In my parish in Naour, we live and pray with 40 refugees every day. The future is bleak at the moment. The Christians from Iraq do not want to return to their homes; they just want to escape to other countries. Jordan may be safe, but they will not be allowed to remain here,” the priest told international Catholic charity Aid to the Church in Need.

Bader has set up a media center in Amman, Jordan’s capital, and launched the Arab- and English-language website abouna.org. The media projects must “don’t favor one religion at the cost of others, but promote a dialogue, especially among Christians and Muslims,” he emphasized.

He added: “we would like to see that it is possible to coexist peacefully and for Christians to remain in the Middle East. If the United Nations helps with schools, with housing, with work— then why shouldn’t the Christians stay?”

According to Father Rifat Bader, there are some 180,000 Jordanian Christians in their homeland, with another 70,000 living abroad. The local Christian community now must find ways to welcome thousands of Christian refugees, while extending charity to Muslim exiles as well.

“Many Christians are waiting for visas to be able to leave the country for third countries. We help them, but at the same time want to give them more than just food, namely a sense of dignity, and ways to strengthen their Christian identity.” Upon arrival, refugees are first housed in refugee centers; the Church currently maintains seven of these. But that is not enough. “We need more centres, because, unfortunately, many more refugees will be coming,” Father Bader said.

The priest explained that the younger generations face particularly grave challenges. He believes that Jordan’s future absolutely depends on taking the needs of young people much more seriously: “we have entered into a dialogue with Muslim leaders. We meet each other at conferences at five-star hotels. However, we also have to be ready to answer questions about what actually comes out of these encounters.

Father Bader said that extremists use the lack of work prospects and the serious social problems within the country for propaganda purposes—making shrewd use of the internet and other means to appeal to young people. He stressed: “we must not leave [the extremists]a clear field. This is why young people should be allowed to have their say. We want to bring Muslims and Christians of various denominations together, open doors and look for solutions. We want to take to the streets and go to the peripheries, as Pope Francis said.”