Trending Now
You are at:Home»Church Street»Saint of the Day»Sts. Basil the Great and Gregory Nazianzen, bishops and doctors
By Catholic Lane Editor on January 2, 2015 Saint of the Day 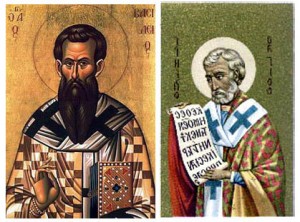 ST. BASIL was born in Asia Minor. Two of his brothers became bishops, and, together with his mother and sister, are honored as Saints. He studied with great success at Athens, where he formed with St. Gregory Nazianzen the most tender friendship. He then taught oratory; but dreading the honors of the world, he gave up all, and became the father of the monastic life in the East.

The Arian heretics, supported by the court, were then persecuting the Church; and Basil was summoned from his retirement by his bishop to give aid against them. His energy and zeal soon mitigated the disorders of the Church, and his solid and eloquent words silenced the heretics.

On the death of Eusebius, he was chosen Bishop of Cæsarea. His commanding character, his firmness and energy, his learning and eloquence, and not less his humility and the exceeding austerity of his life, made him a model for bishops. When St. Basil was required to admit the Arians to Communion, the prefect, finding that soft words had no effect, said to him, “Are you mad, that you resist the will before which the whole world bows? Do you not dread the wrath of the emperor, nor exile, nor death?” “No,” said Basil calmly; “he who has nothing to lose need not dread loss of goods; you cannot exile me, for the whole earth is my home; as for death, it would be the greatest kindness you could bestow upon me; torments cannot harm me: one blow would end my frail life and my sufferings together.” “Never,” said the prefect, “has any one dared to address me thus.” “Perhaps,” suggested Basil, “you never before measured your strength with a Christian bishop.” The emperor desisted from his commands.

St. Basil’s whole life was one of suffering. He lived amid jealousies and misunderstandings and seeming disappointments. But he sowed the seed which bore goodly fruit in the next generation, and was God’s instrument in beating back the Arian and other heretics in the East, and restoring the spirit of discipline and fervor in the Church. He died in 379, and is venerated as a Doctor of the Church.

Reflection.—”Fear God,” says the Imitation of Christ, “and thou shalt have no need of being afraid of any man.”

GREGORY was born of saintly parents, and was the chosen friend of St. Basil. They studied together at Athens, turned at the same time from the fairest worldly prospects, and for some years lived together in seclusion, self-discipline, and toil.

Gregory was raised, almost by force, to the priesthood; and was in time made Bishop of Nazianzum by St. Basil, who had become Archbishop of Cæsarea. When he was fifty years old, he was chosen, for his rare gifts and his conciliatory disposition, to be Patriarch of Constantinople, then distracted and laid waste by Arian and other heretics. In that city he labored with wonderful success. The Arians were so irritated at the decay of their heresy that they pursued the Saint with outrage, calumny, and violence, and at length resolved to take away his life. For this purpose they chose a resolute young man, who readily undertook the sacrilegious commission. But God did not allow him to carry it out. He was touched with remorse, and cast himself at the Saint’s feet, avowing his sinful intent. St. Gregory at once forgave him, treated him with all kindness, and received him amongst his friends, to the wonder and edification of the whole city, and to the confusion of the heretics, whose crime had served only as a foil to the virtue of the Saint.

St. Jerome boasts that he had sat at his feet, and calls him his master and his catechist in Holy Scripture. But his lowliness, his austerities, the insignificance of his person, and above all his very success, drew down on him the hatred of the enemies of the Faith. He was persecuted by the magistrates, stoned by the rabble, and thwarted and deserted even by his brother bishops.

During the second General Council he resigned his see, hoping thus to restore peace to the tormented city, and retired to his native town, where he died in 390. He was a graceful poet, a preacher at once eloquent and solid; and as a champion of the Faith so well equipped, so strenuous, and so exact, that he is called St. Gregory the Theologian.

Reflection.—”We must overcome our enemies,” said St. Gregory, “by gentleness; win them over by forbearance. Let them be punished by their own conscience, not by our wrath. Let us not at once wither the fig-tree, from which a more skilful gardener may yet entice fruit.”