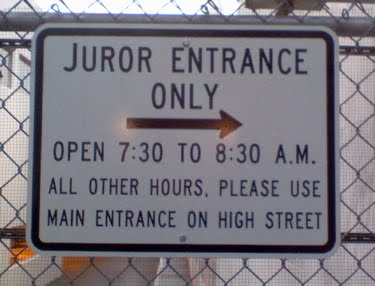 I wonder how many people who criticize the Casey Anthony jury have tried to get out of jury duty when they were called.

There was a time, before I served on a jury, when I was one of those whose life was so busy there was no way I wanted the inconvenience of it. I tried to think of angles to avoid serving my time.

Then, a few years ago, I was summoned to serve on a grand jury. I’m not allowed to discuss what we considered or heard. After our jury proceedings concluded, parents were indicted in the death of a baby, and those parents have since been convicted.

It wasn’t convenient to serve. When I was called, I thought I would be out at noon and left my teens at home. Then I was stuck all day and got one phone call to call my teens, tell them, and pray they didn’t get into trouble all day. How inconvenient.

My time on that jury was the most heart-breaking experience of my life. Grand jury is different from a traditional jury in that we were sequestered in a room and were able to request evidence and question witnesses. During that time, I realized how important it was that I was there, along with all the other jurors in the room. We all brought different perspectives and experiences to the process. Each of us had something to contribute.

I realized then that if everyone who’s savvy figures out ways to get out of jury duty, then we can’t complain about the results the justice system brings to bear.

Parts of my time as a grand juror still haunt me. However, I would be haunted more if I had wriggled my way out of jury duty and was then dissatisfied with verdicts rendered in other cases.

Let’s resolve to shift thinking such that jury duty is once again a duty we keep and never again try to shirk.