Humor me for a moment and just imagine if the following purely fictional (at least as of this writing) HHS press release was issued:

WASHINGTON—The Department of Health and Human Services (HHS) announced today that it is adopting additional Guidelines for Elder Care Services – including physician assisted suicide and euthanasia services accessible to patients and those exercising medical power-of-attorney on behalf of the cognitively compromised – that will be covered without cost sharing in new health plans starting in August 2012.

Imagine the USCCB moving very swiftly; issuing a press release of its own signaling the parameters for the official Catholic response going forward. The contents of this fictional USCCB statement might look something like this:

Although this new rule gives HHS the discretion to authorize a “religious” exemption, it is so narrow as to exclude most Catholic social service agencies and healthcare providers. As such, our institutions would be free to act in accord with Catholic teaching on life only if they were to stop hiring and serving non-Catholics.

It’s now more vital than ever to close the gaps in conscience protection in the new health care reform act, so employers and employees alike will have the freedom to choose health plans in accordance with their deeply held moral and religious beliefs.

Now imagine the vast majority of American bishops speaking out individually by issuing statements in their own names that look something like this:

The Administration has cast aside the First Amendment of the Constitution of the United States, denying to Catholics our first and most fundamental freedom, that of religious liberty. The “Elder Care Mandate” will force our Catholic institutions to either violate their collective consciences by underwriting physician assisted suicide and euthanasia services or to drop health coverage for their employees.

This exercise in “just imagine” is so outrageous as to be unbelievable. Surely the bishops’ response would center around the objective immorality of physician assisted suicide and euthanasia, no?

I mean, after all, these acts are intrinsically evil no matter who does them; in other words, they’re an offense against Almighty God and a violation of Divine Law in all cases, and so any bishop worth his salt would be certain to make this the centerpiece of his message, wouldn’t he?

Therefore, a scenario such as the fictional one just described couldn’t really happen, could it?

Well, I have some bad news for you; it already has. 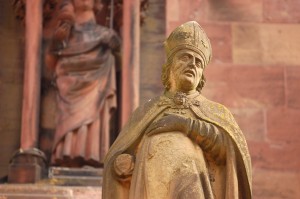 Just go back and reread the fictional HHS, USCCB and individual bishop’s statements above, only this time do an “intrinsic evil” exchange:

Everywhere you see “elder care” replace it with “women’s preventative health care,” and wherever you find reference to “physician assisted suicide and euthanasia,” simply plug in “sterilization and contraception, including abortifacients.” Now you have an accurate snapshot of the conversation that has been taking place between the USCCB, nearly every individual American bishop, and the Obama Administration over the HHS “preventative services” mandate.

It should be obvious to every authentic Catholic reading this that we have a major problem.

The Successors to the Apostles are called specifically to teach, sanctify and govern the people of God, leading them and forming them that they might be good and faithful children of the Church. From among the well-formed Catholics in their care, good politicians and lawyers (not to mention voters) will surely come forth; ready and able to serve the Lord and His Church in their chosen vocation. The American bishops themselves, however, are not called to act as politicians and civil liberties lawyers whose job it is to defend the Constitution.

Our bishops are also called, like every other baptized person, to carry out the Great Commission, which is all about harvesting souls for Jesus Christ – the Way, the Truth and the Life – leading them to the Church – the universal sacrament of salvation. It has little to do with defending the civil rights that are particular to American citizenship apart from first and foremost defending the universal rights of Christ the King.

Now, this is not to say that our bishops should extract themselves entirely from the political process, they cannot; rather, it is simply to state the obvious – bishops need to be bishops. Christ gave us shepherds for a reason and we desperately need them to shepherd, after His example, not after the example of Daniel Webster.

Look, the USCCB is already a bloated bureaucracy that boasts more staffers than shepherds; not ideal by any stretch of the imagination, but fine, make use of it. Let USCCB General Counsel Anthony Picarello and his legal team make the civil liberties argument while rallying the nation’s faithful behind the Constitution.

But for the love of God, we need our bishops to make the case for Christ the King, rallying the faithful behind the Eternal Word of God! This alone, not some constitutional right to religious liberty that can theoretically be overturned by legislative fiat tomorrow, is the Source of our salvation.

The disordered episcopal priorities that are so plainly evident in the current HHS mandate debacle are nothing new. In fact, they’re so old that one can reasonably assume that the majority of Catholics in the United States today consider free sterilization and contraception less as an affront against God than as a welcome gift.

It is in this climate that the American bishops are now trying to rally the troops by asking the very same people they failed to form in the faith to join them in battling the gift horse. That should go well.

I hope I’m wrong, but I’m pretty sure that most of the 54% of self-identified “Catholics” who voted for Obama won’t be beating down the door to fall in line, and given the contracepting tendencies of the other 46% I wouldn’t bet the farm on the majority of them either.

As painful (and frankly, embarrassing) as this episode in “American Catholicism” is, perhaps it is necessary in order to set things right.

When our bishops come to realize the sad truth that only a relative handful of those Americans who call themselves “Catholic” these days really are, maybe, just maybe, they’ll get back to the business of shepherding the flock, leaving the politicking and lobbying to those who are properly called to do so.