Trending Now
You are at:Home»Columnists»The Perils of Growing Up a Girl
By Colleen Carroll Campbell on February 3, 2012 Columnists, Featured, Parenting 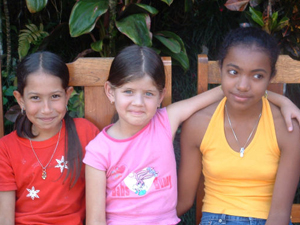 She arrived pink and plump, sporting a full head of cotton-soft brown hair and that intoxicatingly sweet scent that only newborns have. All gurgles, whimpers and tiny yawns, her delicate fingers gripped mine as I thought of all the things I wanted to give this brand-new baby girl: love and security, freedom, opportunity and the inner strength to weather life’s fiercest storms.

Like the arrival of her sister and brother before her, my newborn daughter’s debut last month reminded me once again what a perilous and potentially heartbreaking endeavor parenthood is. In welcoming a child into your life, you consent to share in her vulnerability as well as her joy, to risk the pain of seeing her hurt by a world far less enthralled with her charms and protective of her innocence than you are.

That’s particularly true for parents of girls, a fact I was reminded of last week when I spotted the cover of Caitlin Flanagan’s much-debated new book, “Girl Land.” I felt simultaneously captivated and disturbed by the photo staring back at me, an image of a little girl only a few years older than my own girls striking a seductive pose in imitation of a pair of scantily clad, emaciated mannequins standing before her. I quickly purchased the e-book version and spent the next few days balancing my new bundle of joy in one arm and Flanagan’s alarming treatise on the perils of postmodern girlhood in the other.

A teacher-turned-social-critic, Flanagan focuses her attention on the fraught period of female adolescence with an emphasis on the ways our prurient, porn-saturated culture short-circuits the healthy development of girls. Her premise — that teenage girls need more protection from the invasive and obscene elements of our post-sexual revolution society — has riled many feminists, who have blasted Flanagan’s emphasis on female vulnerability as retrograde and patronizing.

In an age when baby girl onesies come adorned with such slogans as “little hottie” and “diva in training,” padded bras and pole-dancing kits are marketed to preschoolers and teen girls routinely use their cell phones to send boys pornographic pictures of themselves, it’s tough to imagine how any halfway-conscious parent can argue with Flanagan’s assertion that our hyper-sexualized culture poses particular risks for girls. For those still unconvinced, there are reams of reports from groups like the American Psychological Association describing links between the rising sexualization of girls and their struggles with depression, eating disorders, promiscuity and poor self-image.

Flanagan’s book skips most of these studies but accurately captures the emotional truth behind them: the feelings of excitement and danger that surround a girl’s gradual transition to womanhood. That transition, Flanagan argues, increasingly is complicated by a culture that encourages girls to view and market themselves as sex objects long before they understand the potential costs of doing so.

For all the feminist ridicule Flanagan has incurred for her parenting suggestions — that fathers more thoroughly vet their daughters’ boyfriends and parents keep the Internet out of their daughters’ bedrooms — she sidesteps the most promising fix to the problems she describes: the decision by parents not merely to police or shelter their daughters but to begin early instilling a clear moral framework rooted in transcendent values, one that helps girls make virtuous, disciplined decisions about their budding sexuality. Flanagan seems to regard chastity and sexual purity as an impossible option for teenage girls, even as she painstakingly chronicles the grief girls come to when they adopt the hook-up culture’s anything-goes ethos instead. As a result, her book ends not with the countercultural call to arms she apparently intends but with a whimper of resignation.

Happily, parents still can use books like Flanagan’s and studies like those circulated by the APA as helpful reminders that when it comes to raising girls today, the challenges are real and the stakes are high. In a culture that equates femininity with monomaniacal fixation on appearance, obsessive acquisition of status objects and aggressive sexuality, the moral formation that parents give girls matters as never before. And the battle to defend the innocence and dignity of our daughters must begin not in adolescence but as soon as that innocence and dignity come under attack — which is to say, practically from birth.