Trending Now
You are at:Home»Featured»Justice or Comfort? Conservatives and the Rape Exception
By Michael Baruzzini on June 16, 2011 Featured, Life Issues & Bioethics 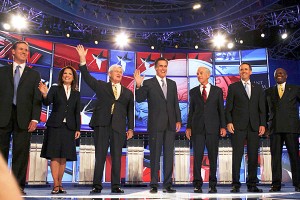 American conservatives do not often argue that it is the government’s role to guarantee comfort. While each of us has a right to be unimpeded by excessive governmental interference in our own “pursuit of happiness”, it is not common to find conservatives arguing that the government guarantees us happiness, or more to the point, guarantees our right to injure innocent others in our pursuit of happiness. Yet that is exactly the argument put forth by many self-proclaimed social conservatives. Specifically, I refer to the common conservative exception to the prohibition of abortion in the case of rape (along with incest and the ever-vague “life of the mother.)

As seen on Monday night’s Republican presidential primary debate, in our secular age even many ostensibly Christian and conservative political candidates are uncomfortable asserting an unequivocal and universal right to life for all of the unborn. “I’m pro-life,” says the candidate, “and I would prohibit abortion, except in the case of rape.” But what the ostensible “pro-life” candidate who allows an exception for rape doesn’t recognize is that allowing abortion in the case of rape is choosing death, not life.

The defense of the rape exception often stems from arguments based on a notion of “responsibility.” Abortion is wrong, in this view, because those who choose to engage in sexual intercourse have the obligation to accept the consequences of their free choices. One cannot choose sex, and then violently attempt to undo that choice through abortion; therefore abortion is ordinarily wrong. Rape, however, is different because the victim did not choose her situation. The pregnancy that results from rape is itself the effect of a violent offense. Therefore, the logic goes, it is acceptable, though unfortunate, that this intrusion be remedied by recourse to abortion.

I reject this logic, as should any consistent pro-lifer and any consistent conservative. The conservative mindset is distinguished from the progressive by the acceptance of a God-given natural and human reality. There are certain aspects of the world around us, conservatives believe, which must be accepted, and which cannot be manipulated into the preferences of ideology. One aspect of reality is that life is often tragic, and our lives’ circumstances are the result not only of our choices but also of events beyond our control – events which may even bring us cruel suffering. The comfort-state of progressivism often places comfort beneath justice in its attempts to undo the suffering caused by tragedy. The conservative answer to tragedy, on the other hand, is not further injustice in a futile attempt to erase injury, but rather to embrace the fundamental principles of truth, justice, and charity. (Our answering to suffering, by the way, is not denial or stoic acceptance, but rather the redemption of suffering that can be found in community, Church, and spiritual growth, and which ultimately flows from Christ’s own undeserved suffering on the cross.)

The Declaration of Independence recognizes this given reality in its proclamation of self-evident, God-endowed rights, including the right to life. This is the simple fact: the sanctity of the life of a child conceived through rape is no different than the life of a child conceived through ordinary consensual relations. Unless American conservatives want to begin to visit revenge for the sins of the father upon the child, the simple humanity of the child must be accepted, and granted the same respect.

Consider: the logic of the “rape” exception would, if followed, would allow the child to be executed at any age, even after birth, should the mother decide the burden of caring for him was too great. After all, it was not a burden she chose. So why not give it a trial run, and if a three-year-old is just too much, kill him?

Such a position is of course absurd, because the conservative respect for reality recognizes that the child’s right to life is independent of either his mother’s opinion of him or the circumstances of his conception. Yet conservative “exceptioners” hold exactly this position: some lives are forfeit because they are unwanted. In this one area some conservative thinkers seem to have given way to the liberal argument for guaranteed freedom from suffering.  It’s time for conservatives who claim to respect reality and God-given rights to get our principles clear: do we uphold God-given justice, or do we execute innocent lives for comfort?