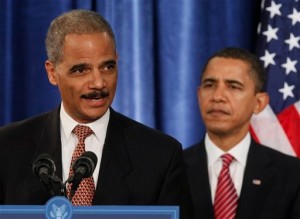 So much tyranny, so little time.

Eric Holder is much more than just incompetent. He’s an extremist pro-abortion activist who shares his boss’s goal of “fundamentally transforming America” to reflect both men’s secular-socialist self-image.

The most recent and obvious example of this administration’s serial abuse of power in furtherance of a radical pro-abortion agenda came when the Department of Health and Human Services mandated, in contravention of the First Amendment, that all religious organizations provide contraception, sterilization and various forms of abortion to employees. This may be the single greatest violation of our constitutionally safeguarded religious liberties in our lifetimes. The mandate remains in place to this day.

But individual citizens haven’t escaped a forced fiduciary tie to abortion homicide. A few weeks later HHS arbitrarily attached a “final rule” to Obamacare requiring that every American, pro-life or otherwise, pay one dollar per month earmarked expressly for an abortion services pool. This validates pro-life forewarnings that the president was simply lying when he issued a toothless executive order supposedly banning federal dollars for abortion. (What do we call someone who chronically lies?)

Still, every once in a while the good guys win one.

For several months now the Obama administration has been abusing our judicial system through a concerted political intimidation campaign via the federal courts. Obama has instructed the Justice Department to sue a number of pro-life counselors and volunteers for allegedly violating the Freedom of Access to Clinic Entrance (FACE) Act.

You won’t hear it from the mainstream media, but the Justice Department has just faced an embarrassing smack down on the highest profile of these cases. It has dropped an appeal in Holder v. Pine against pro-life sidewalk counselor Mary “Susan” Pine, who is represented by the civil rights firm Liberty Counsel. The DOJ has agreed to pay $120,000 for this frivolous lawsuit which, as the evidence indicated, was intended to intimidate Ms. Pine and send a shot over the bow of pro-lifers around the country.

Mr. Holder unsuccessfully sought thousands of dollars in fines against Ms. Pine, as well as a permanent injunction banning her from counseling women on the public sidewalk outside the Presidential Women’s Center (PWC) abortion mill (or any other “reproductive services” clinic).

After 18 months of litigation, the DOJ’s case was thrown out of federal court, and the department was chastised in a scathing ruling by U.S. District Judge Kenneth Ryskamp for filing a case with no evidence.

Judge Ryskamp wrote that Holder’s complete failure to present any evidence of wrongdoing, coupled with the DOJ’s cozy relationship with PWC and their apparent joint decision to destroy video surveillance footage of the alleged “obstruction,” caused the court to suspect a conspiracy at the highest levels of the Obama administration. “The Court is at a loss as to why the Government chose to prosecute this particular case in the first place,” wrote Judge Ryskamp. “The Court can only wonder whether this action was the product of a concerted effort between the Government and PWC, which began well before the date of the incident at issue, to quell Ms. Pine’s activities rather than to vindicate the rights of those allegedly aggrieved by Ms. Pine’s conduct.”

After the ruling the DOJ appealed on the last day possible and gave indication that President Obama had personally ordered the appeal. A little over a week later, the president apparently decided to cut his losses and reversed course.

Harry Mihet, senior counsel for Liberty Counsel, said of the judge’s ruling: “It’s not every day that a federal judge accuses the Justice Department of a full-blown conspiracy.”

Ironically, this past December, in the midst of the case, Ms. Pine actually counseled a woman outside of PWC and convinced her not to have an abortion, thus saving the life of the child and possibly the mother as well. Her email to Liberty Counsel read simply: “We saved a life today.”

It is irresponsible for the U.S. Department of Justice to place politics above principle when deciding to prosecute, and thus attempt to silence, a pro-life sidewalk counselor without any evidence of wrongdoing.

When the nation’s highest law enforcement officer files suit against any citizen, the suit must be based on the law coupled with compelling evidence. Anything less is an abuse of the high office. Susan Pine will not be silenced or detoured from her mission to save the lives of innocent children.

Indeed, “politics above principle,” intimidation of private citizens and jaw-dropping abuses of power are but a few hallmarks of this Obama administration.

History will be no more kind to this president than he has been to the citizens he was sworn, and failed, to honorably serve.