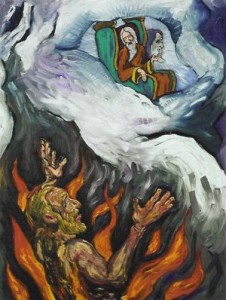 As an Eastern Catholic, we are taught early on to fight death at all costs.  Contrary to popular belief, death is not natural and is actually a result of sin. As a result of sin  every man and woman, whether a pious believer or an atheist, will one day taste death.

In this parable, we see a glimpse of the activity which takes place after our soul and our bodies separate.

Lazarus the beggar, wounded with sores that the dogs would lick, dies.  When his soul left his body, it was received by the angels and carried to Abraham’s bosom. In John Henry Newman’s epic work “The Dream of Gerontius” his Guardian Angel meets his soul in the air and presents him, his charge, to the just Judge.

We also know that in Luke 12:20 that the demons receive the souls of the unjust and hear the voice of God:

“You fool! This very night your life will be demanded from you; then who will
get what you have prepared for yourself?”

Lazarus went to the bosom of Abraham, and the rich man went to a fiery place where he suffers torment in flames.  Despite their different destinations, the souls are keenly aware of each other’s existence, and in fact see each other. The scriptures say that the Rich Man, “saw Abraham afar off, and Lazarus in his bosom.” While the Rich man is suffering from the burning heat, he asks Abraham to send Lazarus to cool his tongue because, as he expressed himself, “I am tormented in this flame.”

Then, ever so late,  the rich man remembers his brothers and begs Abraham to send Lazarus to tell them of his torment, to preach to them. The dead, even those in the flames are keenly aware of the living and care for their existence.  The rich man pleads to Abraham to send Lazarus to preach to his brothers, but he has no power of coercion. His exhortation to try to warn to his brothers falls upon deaf ears, and instead receives the following message from Abraham:

‘If they will not listen to Moses and the prophets, neither will they be persuaded if someone should rise from the dead.’“

As we move toward the Pasche, may our Lenten prayer be to ask for consolation. May we take to heart our mortality, and begin in this graced season to correct where we have fallen short of the glory of God.