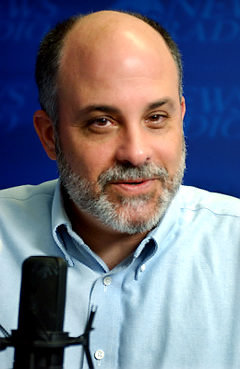 A particular aspect of the work stands out.  In his introductory chapter Levin describes compellingly the necessity of a radical course of action if “we the people” are to have any chance of saving the country.  His brand of radicalism does not include, however, nor does he himself so much as entertain in his book, the notion of armed revolution emulating Gen. Washington and the continental army.  Rather he looks to the Framers for a legal way to re-enthrone the venerable charter they composed in 1787.  In Article V they gave us two methods whereby to restore the scepter to the written Constitution.

Fortifying or buttressing Amendment(s) proposed by 2/3 of both houses of the Congress, with ratification by 3/4 of the States.  Today, however, getting such a supermajority of Congress to agree on anything substantial is politically impossible, given the corruption and bitter polarization inside the D.C. beltway.  A more hopeful path is through the State Legislatures, as per the second option:

Forwarding the Amendment(s) to the States by means of “a Convention for proposing Amendments.”  This Article V amending convention would be convened by petitions submitted by a simple majority in each of 34 State Legislatures.  What the Convention proposes would still have to be ratified by 38 State Legislatures (assuming the Union remains at 50 States).

Such a Convention would be a unicameral assembly, a single chamber, far more capable of decisive and keen-edged action than Congress.  Also, given the absence of provisions for minority rule — such as Senate filibusters or the undemocratic autonomous standing committee system which characterizes the House of Representatives — there would be little danger of dilatory tactics or parliamentary pigeon holing of the measures supported by Convention delegates.

Insofar as Levin’s advocacy for the more radical half of Article V has garnered enough popular interest to lift his book to the top of the charts, we can take this level of literary success as evidence that citizens are not as complacent as sometimes claimed.  Evidently “we the people” are starting to cast around for a way to circumvent the oppressive Federal apparatus.

Here, in my view, is the chief strength of Levin’s work — not his Liberty Amendments per se.  The fact that an Article V convention is under serious consideration by citizens who think deeply enough to write or to read a non-fiction book means that there is still hope for turning the country back from the abyss, i.e. for reviving the Republic under God and the written Constitution.”

Part of me (the resentful/impulsive side no doubt) would like to see Lincoln’s 2nd Inaugural recapitulated: for every drop of blood shed by the abortionist’s scalpel or infected by homosexual hedonists, let another be shed by the sword.  I suspect that colonial American preachers and writers like John Cotton and Michael Wigglesworth would take such a view if they saw how the postmodern revolution has trashed the country ­– morally, politically and otherwise. 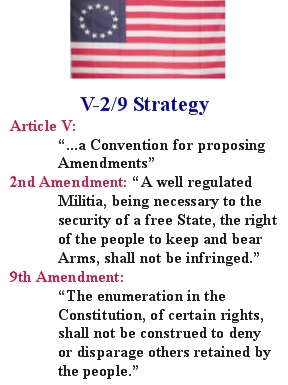 Another side of me (certainly my better lights) would bow to the prudence and restraint exhibited by the Framers of the Constitution, viz. the non-violent, legal option which they availed to the people, namely the Article V convention.  In the 2nd and 9th Amendments, should Article V fail, the first Congress provided an implicit plan B.  Thus our forbears bequeathed to us a V-2/9 strategy,* with the latter course of action – the armed insurrection – much more likely to prosper if exercised, not impulsively, but only as a last resort after peaceful options are exhausted.

Every American, therefore, who favors restoration of the American Republic under the written Constitution ought to second Levin’s motion for an Article V Convention.  The problem or caveat is in his eleven proposed amendments:  Forcing neo-conservative constitutional Amendments through without accompanying concessions to other citizens of good will would, in theory, be like Morsi’s revolution in Egypt.  The backlash against the Muslim Brotherhood government’s agenda might be comparable to how Americans would react if presented with a Constitution altered for the exclusive purpose of a neocon revolution.

But reality trumps the theoretical.  It is exceedingly unlikely that so narrow a convention could be convened, much less pushed through to ratification.  The net result, therefore, of an exclusively neocon convention campaign would be to map out the convention route as Congress-like in partisanship, and to discredit this last legal resort to fundamental reform.  This approach might thus destroy, or at least diminish, Levin’s laudable hope of Restoring the American Republic.

Levin’s idea of reform is riven with moderation, in the negative sense of the word.  The national malady is not moderate in nature, but radical.  The USA of 2013 has moved radically away from the vision of the Founding Fathers and Framers.  It has left behind what Tom Brokaw termed The Greatest Generation ­– the men and women born about 1920 who won the Second World War at great personal sacrifice.  They saved the world.  But now postmodern politicians are leading America the Beautiful into an apostasy opposing the principles espoused, fought for, and died for, by the greatest generation of Americans still living.

Politics is said to be the art of compromise.  The best conservative answer to the political necessity of compromise is to offer concessions to the left – on issues like peace, the environment, and the priority of labor over capital (Abraham Lincoln’s phrase for the right to make a decent living by working).  In return for unmitigated concessions to the left, conservatives would get unadulterated reforms to…

Reinforce the right to keep and bear arms;

Restore the preeminence of the written Constitution as against usurpation by an imperial Presidency and runaway Federal Courts; also a Constitution that trumps diplomatic interference with national Independence, like the UN small arms treaty just signed by the Obama Administration.

Cut through the bureaucratic thicket that spies on citizens, stifles personal freedom, and over-restricts free enterprise;

Revive Congress via rotation in office and internal streamlining; (Levin’s plan to rescind the 17th Amendment would hardly dent the D.C. plutocracy/oligarchy, and his proposal for uniform congressional term limits of twelve years is too slow and indiscriminate for a bicameral system).

The last two reforms of Congress and of the Federal bureaucracy would be non-partisan and enthusiastically supported across the political spectrum.  A neocon convention with “moderate,” “balanced” reforms would be much less helpful, if not quite worthless, compared to one which offers strong reforms for both sides.  Undiluted reforms would be worth fighting for, unlike a set of neo-con Amendments watered down and secularized to placate the left.  Instead afford the left some undiluted reforms about which their ilk will be enthusiastic.  Ours will provide the balance.

As for Americans appalled by their country’s social/cultural decline:  Does Levin really think his reforms will restore the Republic without establishing some kind of fire line against the diabolical fires conflagrating society?  In other words, a convention is not worth having if it fails to take up the most pressing developments that undermine the cultural basis of America’s greatness.  As President Dwight Eisenhower warned (paraphrasing Tocqueville), “America is great because America is good; and if she ever ceases to be good she will cease to be great.”

As the country declines, there are souls who seek not to restore the basis of true greatness, but to redefine it – from a great place to live, into a great empire; from “one nation under God,” to a global force pushing secular values.  But if restoration rather than redefinition is our goal, then we need to address issues like the bias against religion in the public square; the iron decree in the negative against prayer and Bible reading in all of the nation’s 15,000 school districts, resulting in a spiritual desert wherein 90% of American students spend 180 days per annum for at least twelve of their formative years; the holocaust now on the order of 50 million dead babies since SCOTUS mandated abortion in 1973; the furious assault against the sanctity of marriage; the reeking tide of pornography that has engulfed society; and generally the opportunity defended by Federal courts to hypersexualize every aspect of public life, and to blitz young people with immoral and destructive values.

These social/cultural items are, of necessity, an indispensable part of any convention agenda.  Otherwise why bother with political and economic reforms?  The nation is doomed and justly so. “Indeed I tremble for my country when I reflect that God is just, that his justice cannot sleep forever.”  (Thomas Jefferson, panel 3, Jefferson Memorial)**

Not only would Levin’s neocon convention agenda leave Judeo-Christian conservatives empty-handed and dismayed, it would also snub the rational left.  A preferential option for peace in foreign policy, for a structural solution to unemployment, and for checks against the globalist plutocracy that outsources jobs while outflanking environmental and labor laws – these, at least, should be part of our proposed convention agenda if a left-center-right coalition is to be formed.  Only such a broad political coalition will have the clout to convene a Convention in the first place, and then to win ratification for the radical reforms necessary to bring about a U-turn in the America’s headlong rush to ruination..

Levin closes on a note of urgency.  “Time is of the essence,” he writes.  And yet his book proposes slow-motion reforms.  The second paragraph in his Epilogue is excellent.  In the abstract it eschews defeatist moderation.  But in practice his Convention agenda would, if constitutionalized, give us little to nothing in the way of radical reform.  Levin empowers, for example, no cadre of Federal ombudsmen; nor does he provide popular oversight with enough clout to cut through the anaconda-like regulatory restraints that are bureaucratizing every aspect of American life.

Happily Levin invites his readers to see Liberty Amendments as a summons to “better alternatives” for restoration.  He hopes his book will help enkindle a national discussion on the sort of Convention agenda that Americans can enthusiastically support.  Following up on Levin’s invitation, look for a continuation of this series – forthcoming in Catholic Lane.

*According to professor of law, George Anastaplo, of Loyola University, Chicago, “Perhaps the most important of the unenumerated rights referred to by the Ninth Amendment, if not the most important of all of the rights encompassed by the Bill of Rights, is the right of revolution. It had been invoked by the People, and to good effect, a decade before the framing of the Bill of Rights, having been critical to the emergence of the United States.” (Address to the Midwest Political Science Association Annual Meeting, Chicago, April 14, 1989 on the occasion of the bicentennial year of the composition of the US Bill of Rights).

**June, 1785. (First publication of Jefferson’s Notes on the State of Virginia). “Can the liberties of a nation be thought secure when we have removed their only firm basis, a conviction in the minds of the people that these liberties are of the gift of God? That they are not to be violated but with his wrath? Indeed I tremble for my country when I reflect that God is just: that his justice cannot sleep for ever:”