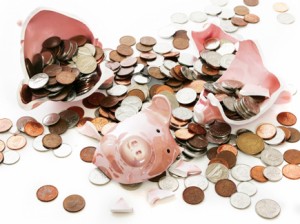 Once again there is panic running through the halls of Congress, the Oval Office and in the chattering classes that make up mainstream media over the prospect of shutting down the federal government. Most of the panic is a result of the inability of politicians to reach an agreement on government spending. If we hope to begin to recover true prosperity, then making real, significant cuts in government spending should be a top priority. Only true, substantial reductions in government spending will free necessary capital for entrepreneurs to use in productive investment. This investment, in turn, will allow for sustainable economic progress.

Things have only gotten worse following the financial meltdown of 2008. It took from 1789 to 2001 to accumulate a federal debt of $5.8 trillion. However our government officials have added a nearly identical $5.8 trillion in four short years between 2007 and 2011.

The 10 highest monthly budget deficits have all occurred since February 2009. During the Obama administration, the federal government has accumulated more new debt than it did from the time that George Washington became president to the time that Bill Clinton became president. Since President Obama entered the White House, the national debt has increased by an average of more than $64,000 per taxpayer. In fact, Obama will become the first president to run deficits of more than a trillion dollars during each of his first four years in office.

Talking in trillions of dollars can easily boggle the mind. To provide some perspective on the magnitude of our current debt, think about this: If you were alive when Jesus Christ was born and spent one million dollars every day since that point, you still would not have spent one trillion dollars yet. This is staggering but true.

Last summer, the New York Times’ columnist and economist Paul Krugman told Business Insider that in order to avoid an economic depression, “Somebody has to spend more than their income, and, for the time being, that has to be the government.”

Krugman stands the economic problem on its head. Instead of not enough desired production, it is thought that our problem is not enough demand. The perceived solution is increased government spending. If people do not voluntarily demand enough, don’t worry, the government will make up the difference.

The problem with this thinking is that government spending has to be paid for. It can be funded in only three ways: with taxes, borrowing, or inflation. All three of these funding methods have negative economic consequences.

Less saving and investment reduces capital over time, decreasing our productivity. The economy output decreases, real wealth falls and people see a drop in their standard of living. Funding increased government spending by increased taxation is like pouring weed killer on your garden, all the while thinking that it is fertilizer.

Taxes are politically unpopular, and because of this the government relies on borrowing money to fund deficit spending. There are two sources from which the government can borrow: The banking system and private savers.

Borrowing from the banking system is inflationary. Banks lend newly created dollars, thereby increasing the money supply with all of the associated negative consequences. Overall, prices increase and the purchasing power of the dollar falls. Additionally, artificial credit expansion — credit not funded by savings — creates the business cycle by spawning capital malinvestment. Artificial credit expansion makes many unwise investments (say, in residential and commercial real estate and financial derivatives) look profitable because of the accessibility of cheap credit, so business activity expands, manifesting itself in an inflationary boom. These unwise investments eventually must be liquidated, and the boom resolves itself in a bust whose twin offspring are capital consumption and unemployment.

Borrowing from private savers is not inflationary but does have serious negative economic consequences. This type of borrowing diverts savings from private investment to government consumption. Savings that would have been invested in productive activity will instead be spent on bureaucratic feasting.

The bottom line is that we are correct to be concerned with the fiscal situation facing the federal government. The larger the percentage of a nation’s economy absorbed by government spending, the slower their economic expansion because real economic expansion is the product of wise entrepreneurs using capital that is funded by real savings.

As the deadline for the federal budget knocks on the door it is quite clear what is needed: fiscal reform. Only facing the melancholy music of drastically cutting government spending will put us back on the path to prosperity.