Trending Now
You are at:Home»Columnists»Making a Mystic a Doctor of the Church
By Cheryl Dickow on October 8, 2012 Columnists, Featured, Live in Christ 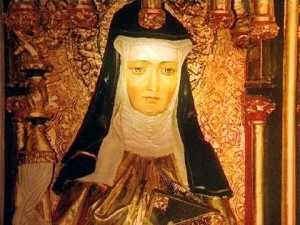 With the October 7th announcement that Pope Benedict XVI will pronounce that 12th century German mystic St. Hildegard of Bingen is a doctor of the church—as well as announcing that same honor being bestowed upon St. John of Avila—there is a renewed interest in the understanding of “mysticism” with our church.

The church’s history with mystics actually goes back to the Jewish roots of the faith.

Mysticism itself can best be explained as man’s need to connect with God in ways that transcend his mere day-to-day experiences.  Man wants to know God intimately, deeply, privately—to fill that place within his heart which God created for His own indwelling.  St. Augustine perfectly captured this earthly feeling when he said, “Our hearts are restless until they rest with Thee.”  Augustine’s life (354-386), as told in his Confessions, reflects the ways in which man experiences earthly restlessness and pursues Divine intimacy.

Jewish mysticism, which dates back thousands of years, has always been a response to that personal quest.  It flourished in many countries during Hildegard’s lifetime, including her own Germany. She was a fascinating figure who built a monastery for her nuns and wrote hundreds of letters filled with warnings and prophecies. Some criticized her while others welcomed her words and wisdom.

Another country that saw the growth of mysticism during the twelfth century was northern Spain where, it is interesting to note, St. Teresa of Avila would eventually experience her own inner mystical conversion in the 1500s and ultimately become, in 1970, the first female doctor of the Church. Now St. John of Avila joins her ranks.

While we have these mystics in our Church’s history, not all are called to such a state nor encouraged. Looking to the Jewish roots of mysticism, we learn that its study and practice is considered uniquely powerful and was originally forbidden unless a Jewish male was at least 40 years old.  This was considered an age where he would have had enough years of Torah study upon which to be firmly grounded in faith since mysticism has a both the potential for the development of good as well as the unleashing of evil.

The Catholic Church affirms this dual possibility of mysticism and approaches the subject of mysticism with caution.  She warns against pseudo-mystics as well as the formation of doctrines, such as pantheism, in which false teachings are perpetuated under the guise of mysticism.

This paradox of exposing oneself to good or evil in spiritual practices is easy to understand.  There is always the potential for ego, if not put fully aside, to become empowered in selfish and delusional ways. In St. Teresa’s writings on her mystical experiences, her humble attitude towards self is ever-apparent.  Early Jewish mystics clearly warned that human ego has a way of polluting the heart. In the Jewish “standing prayer” which is called the Amidah, first and foremost the supplicant calls to mind and declares his or her own unworthiness to approach God. The petitioner stands before God in true and complete humility—all remnants of ego and self cast aside. St. Teresa of Avila called humility “truth,” recognizing it as the required approach for such a transforming spiritual experience. Think Galatians 2:20, “I have been crucified with Christ. It is now no longer I that live, but Christ lives in me.”

Sadly, mysticism today is often misunderstood and has most recently been maligned because of new-agers as well as through the disclosure that Madonna (the pop icon and not the Blessed Mother) practices teachings from the Kabbalah, one of the earlier known works on Jewish mysticism.

Kabbalah (which literally means “tradition” but connotes a “handing down of tradition”), is a school of thought in regards to contemplative prayer and union with God.  Studying Elijah was a central point of early Jewish mystics.  Reference to the “Chamber” experience appears in Jewish mysticism long before St. Teresa of Avila’s own experience, as shared in Interior Castles.

The day-to-day practice of contemplative prayer creates a peaceful existence for one’s soul.  It is the constant giving of self, and the giving over of one’s will to the will of God, that will bear spiritual fruit.  Contemplative prayer, of which the Catechism of the Catholic Church says is an “intense” time of prayer (#2714), the “simplest expression of the mystery of prayer” (#2713) and a “gaze of faith, fixed on Jesus” (#2715) is the form of prayer used by mystics—modern day and those in our Church’s history.

Catholics have always understood that the earthy passage “matters” and that salvation, given through the grace and mercy of God through His Son, can be lost (Romans 2:2-8, Ephesians 2:8-10, James 2:14-26).  Just so, the development of the soul does not occur on its own but does so with a daily commitment to prayer and the pursuit of intimacy with the Creator.  The conscience cannot rightly form on its own.  Maintaining, or keeping, the gift of salvation—as well as development of the soul and conscience—require an “effort” on our part.  The Catechism states that while we may not always be able to spend time in meditation, we are always able to enter into the inner prayer of contemplation (#2710).

Throughout Church history—from Pope Gregory I to Blessed Henry Suso and beyond—Catholic mystics have given examples of ways in which our soul’s longing to connect with God can be fulfilled.  Contemplative prayer, and the ways of the mystics before us, are just a few of the tools we are able to use in answering our call to know, love and serve God in this life and be happy with Him in the next (Baltimore Catechism).