Trending Now
You are at:Home»Featured»Through the Year of Faith with the Catechism of the Catholic Church
By E. L. Core on October 7, 2012 Featured, Learn & Live the Faith, MyChurchParish.com 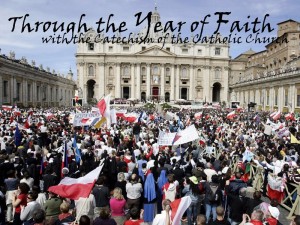 Crowd in St. Peter’s Square During Beatification of Pope John Paul the Great

The Year of Faith

Pope Benedict XVI announced the celebration in his Apostolic Letter Porta Fidei (“The Door of Faith”) on Oct. 11th last year, inviting all to engage the Catechism of the Catholic Church during the Holy Year:

It is in this sense that the Year of Faith will have to see a concerted effort to rediscover and study the fundamental content of the faith that receives its systematic and organic synthesis in the Catechism of the Catholic Church. Here, in fact, we see the wealth of teaching that the Church has received, safeguarded and proposed in her two thousand years of history. From Sacred Scripture to the Fathers of the Church, from theological masters to the saints across the centuries, the Catechism provides a permanent record of the many ways in which the Church has meditated on the faith and made progress in doctrine so as to offer certitude to believers in their lives of faith.

In its very structure, the Catechism of the Catholic Church follows the development of the faith right up to the great themes of daily life. On page after page, we find that what is presented here is no theory, but an encounter with a Person who lives within the Church. The profession of faith is followed by an account of sacramental life, in which Christ is present, operative and continues to build his Church. Without the liturgy and the sacraments, the profession of faith would lack efficacy, because it would lack the grace which supports Christian witness. By the same criterion, the teaching of the Catechism on the moral life acquires its full meaning if placed in relationship with faith, liturgy and prayer. (Porta Fidei 11 ¶ 2-3)

The complete text of the Catechism in English is available at several websites. Here are a few.

The granddaddy of all such sites — I believe it was the first on the Internet, beating even the Holy See and the U.S. Conference of Bishops — is at the website of St. Charles Borromeo Catholic Church in Picayune, Mississippi. (I link to the more useful version with paragraph numbers in the index.)

Other sites are The Holy See, U.S. Conference of Catholic Bishops, and Catholic Doors.

Finally, an ebook-like version is at USCCB.

Of course, the Catechism is available as a book — hardcover or paperback, new or used, or e-book — at many stores and on-line booksellers. (It would probably be better, though not essential, to get the second edition, published since 1997.) A good website for searching for books from many different sites is AddALL.

As a help to the reader, the Catechism itself provides a very brief overview of its contents and organization in Sections IV and V (## 11-22) of the Prologue. You can read the work at your own pace and according to your own inclinations. But there are several reading plans that spread the reading out over the course of a year. Here are a few of them.

The granddaddy of these plans — available since 2003 — is published by the Coming Home Network. It also includes a three-part reading plan for the Bible.

Other plans for reading through the Catechism from beginning to end in a year are at the Adventus, Russ Stutler, and Diocese of Steubenville websites.

For a different approach, helping to avoid getting “bogged down” with a straight-through reading, Michael Ciccocioppo developed a novel one-year reading plan that interlaces portions of the work’s four parts for most weeks of the year.

The Adventus and Russ Stutler reading plans start on January 1st: nonetheless, you could use either starting on any day by merely crossing out each day after you’ve done it. The CHN and Steubenville plans are written to be started on any day.

Ciccocioppo’s original plan is a weekly matrix, each row beginning with Monday. At my suggestion, he generously modified his matrix so it is more convenient to begin on any day of the week, and has supplied an introduction especially for readers of Catholic Lane: How to Read the Catechism of the Catholic Church In One Year – One Day at a Time.

Get started, my friends.

When to start? This Thursday is the first day of the Year of Faith, but Sunday starts its first full week: either day would do. It concludes next year with the last Sunday of liturgical year 2013, Nov. 24th, so you could start at the beginning of the church year, which will be Sunday, Dec. 2, 2012. Or you could start on Jan. 1, 2013, when the civil calendar begins.

When you begin or end isn’t as important as getting started and finishing. So, just start! It is not beyond you: open your mind and your heart. It will be a rewarding experience.