Trending Now
You are at:Home»Featured»Man Bags for the Modern Male
By Tom Purcell on June 12, 2013 Featured, Humor, Men 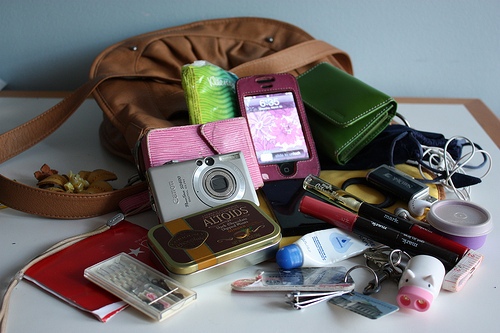 What to get for the contemporary male who has everything? The Man Bag.

The Man Bag is a high-style satchel — a purse, though its creators hate when you call it that. It’s designed to hold the modern man’s wallet, keys, sunglasses, iPod, cell phone, body spray, hair goop, diary and whatever other junk he totes around these days.

Why was the Man Bag created? According to manbag.com, three fellows — Brian, Peter and Thai — “were tired of being ribbed for carrying their gadgets around in hand bags. The torment reached a boiling point one night when Thai was called a ‘pursey’ at a party.”

That fellow who insulted him was lucky Thai didn’t yet have a sturdy Man Bag to smack him with.

So the three tormented fellows designed a special bag for men (they call theirs the MAN-n-BAG) and now sell it through their Website. The concept took off. The Nightline people said it’s the latest trend in men’s fashion. A GQ style editor they spoke with explained why:

“Once you’re out in the work world, do you really want to carry a backpack when you’re wearing a suit? At the same time, most guys don’t want to be like their dads and carry a briefcase.”

Which is precisely the problem.

Modern fellows don’t want to be like their dads — masculine fellows who defined themselves by their actions, not their high style. Fellows like my father.

My father has long known that if a thing doesn’t fit into a man’s pockets he shouldn’t be carrying it. He carries his keys in his right front pocket. He carries his change in both pockets, so he can jingle it while shooting the bull with the butcher, the mechanic and anybody else he encounters in daily life.

My father’s wallet is what a real man’s wallet should be — thick, fat and worn. It holds only the basic items a man needs to get through life: license, money and a yellowed photo of my mother from 1953. He keeps his wallet in his right rear pocket.

Nobody taught the my dad to carry his keys, change and wallet this way. Nobody taught me, either. It’s hard-wired into male DNA. It is what men have always done because it is what we’re supposed to do.

But the genetic code is being rewritten in sensitive new-age men, such as the fellow who wrote a testimonial to manbag.com: “My chiropractor suggested your MAN-n-BAG because sitting on my overstuffed wallet was misaligning my spine.”

Ah, yes, we’re at war with tough-guy terrorists and our fellows are getting injured by their wallets.

I’m not certain how the American male has evolved to such a sissified state, but I have a hunch. The reason dates back 40 years or more, when the feminist movement kicked into high gear.

Yes, feminism brought us many good things. Women deserved equal opportunity and they’re doing well. But some feminists weren’t content with just that. They wanted to destroy the enemy — the American male.

Boy, have they succeeded. Now men spend hours fretting over their looks and style — they spend thousands getting their hair primped, their skin moisturized, their eyebrows waxed. They cry at baby showers and clap the first time junior uses the toilet to do No. 2.

Well, nuts to that. Look, men, we need to get hold of our testosterone. Women are different from us. It’s best that way. It’s best that we distinguish ourselves from them in our actions, manner and dress. They carry purses. We don’t.

So what to get for the contemporary fellow who has everything? A thick, fat, worn wallet that he’ll knowingly slip into his right rear pocket.

It may misalign his spine, but at least he’ll have one.