Trending Now
You are at:Home»Learn & Live the Faith»Catechesis»May is Mary’s Month: The Scriptural Foundation for Marian Devotion
By Fr. Edward Looney on May 8, 2015 Catechesis, Featured 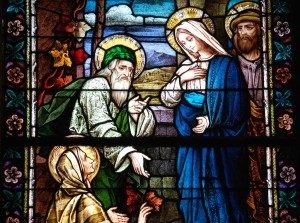 As a Church, we like to dedicate days, months, and years to specific causes and intentions. On Wednesdays in the Extraordinary Form a votive Mass of St. Joseph is typically offered. Thursdays have been honored as a day dedicated to the Eucharist and priesthood; Fridays to our Lord’s passion, and Saturdays to Our Lady.

Our popes in the past decade have also called for specific yearlong celebrations of the rosary, the Eucharist, St. Paul, Faith and the upcoming Year of Mercy.  June has been dedicated to the Sacred Heart, July to the Precious Blood, October to the rosary, and November to the Holy Souls. Suffice it to say, our Church loves her devotions which serve as an aid to her faithful’s spiritual lives.

The Catholic faithful observe Mary’s month through many different devotions, customs, and traditions. Over the course of this month, this mini-series, A Primer on Marian Devotion, will explore the many facets Marian devotion. In today’s reflection, through the lens of scripture, I’d like to address the following question: Why be devoted to Mary?

Devotion to the Blessed Virgin Mary is deeply rooted in scripture. We can look to three examples: Elizabeth, Mary herself, and Jesus. After hearing the announcement of the Angel Gabriel, “Hail Mary, full of grace” and the ensuing dialogue which revealed Elizabeth was pregnant with child, Mary went in haste to the home of Elizabeth and Zachariah. After Mary’s greeting to Elizabeth, John the Baptist leaped in her womb for joy, causing Elizabeth to proclaim, “Blessed are you among women and blessed is the fruit of your womb.” Elizabeth went on to acknowledge Mary as the mother of the Lord. In the gospels, Elizabeth becomes the first to sing the praises of the Virgin Mary.

After Elizabeth proclaimed her praise of Mary, Mary went on to prophesy about future generations of Marian devotion in her Magnificat. The New American Bible translates the phrase, “behold, from now on will all ages call me blessed.” In recounting her praise of God’s goodness to her and all of Israel, Mary understood that future generations would call her blessed because she was going to be the Mother of Jesus, the son of God.

The third example that we can draw upon from the scriptures is the example of Jesus himself. As a son, He would have been obedient to His mother because he had received his human nature from her. The Decalogue, (the Ten Commandments), exhorts us to honor our father and mother; Jesus was subject to this commandment. By honoring His mother on earth, Jesus gave honor to His father in heaven. And Jesus himself, while hanging from the cross in John’s gospel, entrusted Mary to John, and John to Mary. By this very act, Mary became the mother of all believers.

Moreover, St. Paul, in his letter to the Galatians, writes: “I live, no longer I, but Christ lives in me; insofar as I now live in the flesh, I live by faith in the Son of God who has loved me and given himself up for me” (2:20). In 1 Corinthians 11:1, Paul says, “Be imitators of me, as I am of Christ.”  If we want Christ to live His life in us and through us, if we want to be imitators of Christ, we must have a filial love for the Virgin Mary.

Luke 2:51 tells us that Jesus “went down with them and came to Nazareth, and was obedient to them.” Jesus was subject to Mary and Joseph. In imitation of Christ, we then turn to His Mother for intercession.

In the synoptic gospels, Jesus also addressed a specific question: Who are my mother and brothers? To which he responded “Whoever does the will of God is my brother and sister and mother” (Cf. Mk 3:31-35; Mt 12:46-50; Lk 8:19-21). Similarly, in Paul’s letter to the Ephesians 1:5 he describes our status as adopted children of God: “He destined us for adoption to himself through Jesus Christ, in accord with the favor of his will.”

Through Christ, we have become sons and daughters of God, brothers and sisters. As a family, we need a Father (God) and a mother, (Mary). In addition to Mary as our mother, we have a mother in the Church; as the adage goes, what can be said of Mary, can also be said of the Church.

Devotion to Mary should be natural for us as we look to her as a mother. When we honor Mary, we honor Christ. As a Mother, she cares for her children and makes intercession for them. She asks the Father to bestow blessing upon them, which in turn has earned her the reward of being a mediatrix or distributrix of grace.

God has accorded many privileges to Mary which have been made known through the teaching authority of the Church.  She was preserved from the stain of original sin and was assumed body and soul into Heaven where she now reigns as Queen with her Son.

During the month of May, the children of Mary will flock to her intercession. Since May is Mary’s month, people may take up the practice of the daily rosary, add a few extra Marian prayers like the Memorare or the Litany of Loreto to their daily repoitoire, crown an image of Mary with flowers, or make a Marian pilgrimage. Over the course of this month I will explain the many ways we can be devoted to Mary. As the children of Mary, our Marian devotion are the ways in which we tell Mary we love her. During this month, let us give Mary our love. Ave Maria!

Gerard Manley Hopkins, May Magnificat, a poem about May being Mary’s month, available at this link: http://www.poemhunter.com/poem/may-magnificat/