Trending Now
You are at:Home»Featured»Iraq: ‘We Priests and Nuns Will Be the Last to Leave’
By ACN-USA News on May 8, 2015 Featured, Those in Need

“At night we often hear gunfire. But luckily we are quite a bit away from the fighting,” Father Steven says. In fact, the town of Alqosh is only 10 miles away from the front line, where the heavily armed Kurdish Peshmerga forces and ISIS fighters are facing off.

When the weather is good, you can see the Christian towns on the Nineveh Plane that are now under ISIS control. “Back there is my village Batnaya,” the Chaldean priest says, pointing in the direction of the once Christian community. “I was the last to leave Batnaya. The jihadists arrived shortly thereafter.”

Dozens of priests and religious have been made homeless in the past year. They not only lost their convents, churches and monasteries, but also schools and children’s homes—the entire infrastructure of an apostolate built up over many years. “We lost 23 of our monasteries and houses,” Sister Suhama tells international Catholic charity Aid to the Church in Need. The Dominican nun now lives in a development of terraced houses near Erbil, the capital of Kurdistan.

“We were 26 nuns in Qaraqosh alone. We led a flourishing community life there. Some of our sisters are having trouble getting over the loss. At night they dream of soon being able to return.” A fellow nun of Sister Suhama cries quietly as she listens. Fourteen older sisters have died of sheer sorrow since they fled.

The people need to feel that the Church remains close to them, the nun emphasizes. “It is our job to be with our people. I don’t believe it will happen, but should the day come on which the last Christian leaves Iraq: we priests and nuns will be the last to leave.” 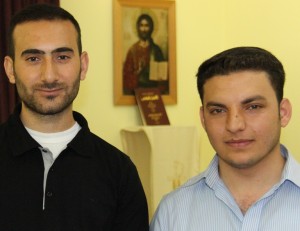 Seminarians Martin and Randi have also lost their homes. The young men are now studying at the seminary in Erbil. “ISIS has strengthened our vocation,” Randi says with deep conviction. “It is fortunate that the people have survived. That shows me that God is a God of life and not of property and objects. God is taking care of us,” he says.

Martin agrees. The Chaldean from Karamlish, a town near Qaraqosh, is already a deacon. “I only want to be consecrated as a priest when I can celebrate the first Mass in my village. I realize that this may take months or longer.” Deacon Martin has consciously made the decision to remain in Iraq, even though his parents are in the US and could easily bring him over: “My place is here. This is where I want to serve the people.”

Randi also feels bound to stay put and serve the faithful: “Our flock may be even smaller in the future, we Christians still have an important job to do here. We have to rebuild our country. Despite everything, we have to learn how to live with the Muslims again. We have to teach our children to respect and esteem the other.”

Aid to the Church in Need supports religious, priests and seminarians who have been forced to flee from ISIS. This is achieved by Mass stipends for priests as well as direct emergency aid for housing and other essential provisions.