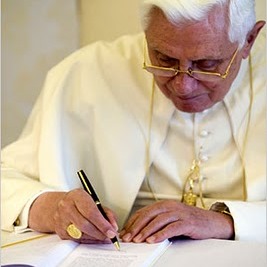 After eight years of continual accusations of doing “nothing” by mainstream media, it has been revealed that Benedict XVI was busy throughout his pontificate removing priests from office who were found guilty of sexual abuse. From 2011-2012, Pope Benedict “defrocked” or laicised 384 priests, more than twice the 171 removed from the clerical state in 2008-09.

According to documents obtained by the Associated Press, in 2011, 125 laicisations were imposed as a penalty, and a further 135 were granted upon request. In 2012, there were 57 dismissals and 67 dispensations. A laicised priest can no longer perform any of the sacramental or public functions of the priesthood, can hold no office in the name of the Church and is removed from all parish duties. At the same time, he is released from obligations to his bishop and is outside the normal supervision of ecclesiastical superiors.

The documents came from Archbishop Silvano Tomasi, the Holy See’s ambassador, or Permanent Observer to the UN in Geneva, who presented the figures to a panel on sex abuse cases last week. Tomasi presented a specially compiled document to the UN human rights committee.

According to Tomasi, in 2012, 418 new child sex abuse cases were reported to and investigated by the Vatican. The figures were later confirmed by Monsignor Charles Scicluna, the official who Benedict placed in charge of overseeing sex abuse allegations.

Tomasi told the panel, “The Holy See has formulated guidelines to facilitate the work of the local churches to develop effective measures within their jurisdiction and in conformity with canonical legislation.”

“In the end, there is no excuse for any form of violence or exploitation of children,” Archbishop Tomasi said. “Such crimes can never be justified, whether committed in the home, in schools, in community and sports programs, or in religious organizations and structures.”

Although the numbers of laicised priests are made public by the Vatican every year, this is the first time the news has reached the mainstream media who have consistently published accusations that Benedict had neglected the task of reform.

Philip Lawler, editor of the online magazine Catholic Culture, commented, “The world’s mass-media outlets are belatedly realizing that Benedict XVI was a champion of reform, not of the cover-up, on abuse cases.

“It will be increasingly difficult to continue serving up the accepted narrative, which suggests that the abuse scandal erupted under Benedict, and he tried to keep the lid on. It didn’t, and he didn’t.”

Pope Benedict issued reforms throughout his pontificate that were a continuation of his work as the head of the Congregation for the Doctrine of the Faith. In 2009, canon law was amended to allow greater ease for bishops who wanted to remove a man from the priestly state as a penalty for “serious scandal”.

As Cardinal Ratzinger, he was privy to the internal information on clerical sex scandals and pressed Pope John Paul II to place the jurisdiction of the matter into the hands of the CDF. Greg Erlandson, co-author of the book Pope Benedict XVI and the Sexual Abuse Crisis: Working for Reform and Renewal, said that Benedict was “arguably …the most knowledgeable man on the abuse crisis” in the Church.

In 2001, John Paul issued a document placing responsibility for all clerical sex abuse cases in the one office, that had previously been dealt with piecemeal by various Vatican dicasteries.

Upon his election as pope in 2005, one of Benedict’s first acts was to end the papal protection enjoyed by Marcial Maciel Degollado, founder of the Legion of Christ, who had been accused of abusing minors. Degollado was later revealed to have been a serial abuser and to have led a “gravely scandalous” double life, fathering several children by different women and abusing boys and seminarians throughout his long clerical career.