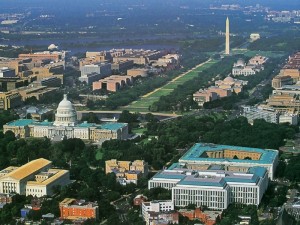 The Sequesters — John and Jane — have been married for eight years. They aren’t Hollywood Stars, professional athletes, or nightly-news anchors, so they’re not exactly multi-millionaires.

John does have a good job, though. His employer’s business in recent years has been growing, and John has gotten an eight- or ten-percent raise every year for the past three years.

Though the inflation rate is astonishingly low, the price of everything from automobile tires to tomatoes has been going up and up and up. So John and Jane are counting on another eight- to ten-percent raise when his employment anniversary comes around — especially Jane, who manages the household budget.

Finally, the day arrives. Jane anxiously awaits John’s return home at the end of the work day. She’s especially anxious because he hadn’t called home during the day, and she fears the news is bad.

Suddenly, he opens the door and walks in.

From the look on his face, Jane doesn’t even want to hear the news. But she summons the courage to say, “Well?”

Jane’s heart sinks and her brain explodes. They could barely afford to continue with a raise, let alone a pay cut.

Tears welling up in her eyes, she asks him if he could explain why this happened. Was business worse than they knew?

Instead of speaking, he just reaches over the kitchen table and hands her the letter he had been handed by his boss.

…. Business has been brisk, but not as good as we had hoped. Though you have received at least an eight percentum increase over the past few years, this year we can only afford to raise your salary by six percentum….

John replies, “I didn’t get as big a raise as we had been planning on. That’s a pay cut… right?”

He had no idea his wife had such a powerful right uppercut.

The “bizarro” world that Jane Sequester lives in — in which her husband thinks a pay raise is a pay cut because the raise is less than expected — is the “bizarro” world we all live in when it comes to the vaunted sequestration. Decried and deplored as anything from horrible to horrendous, from draconian to diabolical, the spending cuts aren’t actually cuts at all, except to baseline budgeting in which the government automatically increases spending from year to year, no matter what: such budget “cuts” mean spending will still go up.

The sequestration scares are the ultimate example of the Washington Wink-Wink: Politicos from both parties warn of imminent disaster if the federal budget is “cut” even though they know government spending will be higher in 2013 regardless if the sequestration “cuts” are implemented.

Put another way, the sequestration scares are lies, pure and simple. Not just bunk, not just distortions or mis-statements, but lies. And every professional politician – Democrat, Republican, Socialist, Independent – in this town knows it.

How much of a difference would the sequestration make? With or without it, the federal government is on schedule to spend no less than $5,000,000,000,000 a year by 2020. (Yes, that dollar figure has the correct number of zeroes, twelve.) 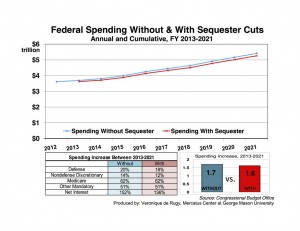 Federal Spending Without & With Sequester Cuts

P.S. Lies? The Hit & Run blog at Reason has discovered that a White House Report Claims Sequestration Will Affect Federal Department That No Longer Exists.